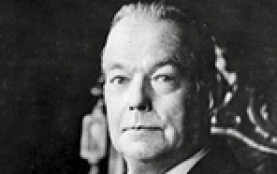 Walter Franklin Prince (1863-1934) was a clergyman and parapsychologist known for his ‘Doris Fischer’ study, a notable case of dissociative identity disorder. He also wrote extensively about telepathy, psychometry, clairvoyance and mediumship.

Walter Franklin Prince was born on April 23, 1863 in Detroit, Maine, USA, an eighth-generation American with English roots.1 He graduated from Maine Wesleyan Seminary aged 18 to became pastor at Methodist and Episcopal churches in Maine. He furthered his education studying arts at Yale and divinity at Drew Theological Seminary. Aged 36, he gained a doctorate at Yale with a thesis on multiple personality disorder, now known as dissociative identity disorder (DID).

Taking up the ministry again at the age of 40, Prince served as pastor at Methodist and Episcopal churches in Maine and Connecticut. He was pastor of several Protestant Episcopal churches in New York, Pennsylvania and California. In 1910, he served as rector at All Saints Church in Pittsburgh and went on to become director of psychotherapeutics at St. Mark’s Episcopal Church on the Bowery in New York City.

In mid-life Prince struggled with depression, which he overcame by a self-prescribed discipline of positive thinking.2  At this time he started to take notice of a young woman, a regular visitor to his church, who he came to realise was suffering from a severe case of multiple personality disorder, as it was then known. By removing her from her abusive father and treating her kindly, he facilitated an integration of the personalities over a four-year period.

Later he collaborated with parapsychologist James Hervey Hyslop, head of the American Society for Psychical Research (ASPR), and a spirit medium, to further investigate the origin of the personalities. Prince and Hyslop documented her case (referring to her by the pseudonym Doris Fischer) in what has been described as the most detailed and prolonged study of its kind ever made.3

Prince’s interest in parapsychology was further kindled by a fleeting planchette session in 1912 in which the message ‘Your father, WM Prince’ came via a medium who had no way of knowing his father’s initials.

In 1916, Hyslop appointed Prince research officer for the ASPR, for which he published many papers in the Journal and Proceedings in the next five years. Skeptical about claims of séance phenomena such as levitations and ‘spirit voices’, Prince acquired knowledge of conjuring by joining the Society of American Magicians, in order to expose the sleight-of-hand tricks used by some mediums.

Curiosity about psychometry brought Prince, via a German doctor, Gustav Pagenstecher, into contact with a Mexican woman, Maria Reyes de Zierold, who was apparently able to perform it under hypnosis, reading from sealed letters with a high degree of veridicality.4

Prince’s relations with the ASPR became strained following its election of a new president in 1923 and the adoption of a more popularizing and – in Prince’s view – less scientific approach. A particular object of contention was its investigation of Mina Crandon, a Boston medium known as ‘Margery’, whom Prince denounced as a fraud in Scientific American. In 1925, Prince left the ASPR to join the rival Boston Society for Psychical Research (BSPR), together with other parapsychologists seeking a more rigorous approach. In the following year he began acting as mentor to Joseph B Rhine and his wife Louisa E Rhine, who went on to establish a successful parapsychology laboratory at Duke University.5

Prince wrote and edited for BSPR’s publications on a variety of topics, including experiments or cases of physical and mental mediumship, a claimed haunted house, DID cases with apparent paranormal aspects, and telepathy. He analysed responses to a questionnaire sent to 10,000 people mentioned in Who’s Who in America asking about paranormal experiences. An issue of the BSPR Proceedings was filled with his study of the Patience Worth case. Another issue described Doris Fischer’s mediumship (see below).

Prince was a member of the London-based Society for Psychical Research (SPR), serving as its president in 1930 and 1931.

After the death of his wife, Prince was supported by his adopted daughter Doris Fischer, now named Theodosia Prince. He wrote, ‘she has been all that a daughter possibly could be’.6  Shortly before his death he answered questions about his beliefs: clairvoyance and telepathy he considered proven, but he was more cautious about postmortem survival, stating that he had not yet seen conclusive evidence and that judgment on the matter was vulnerable to wishful thinking.

All retrieved October 24, 2018 from https://oregondigital.org/sets/dissociation/oregondigital:df670h05c#page/1/mode/1up

Prince, W.F. (1915).  The Doris Case of Multiple Personality Part I.  Proceedings of the American Society for Psychical Research, 9 23-866; http://www.iapsop.com/archive/materials/aspr_proceedings/aspr_proceedings_v9_1915.pdf

Prince, W.F. (1929).  The Doris Case of Multiple Personality.  In Murphy, G., Ed., (1929), An Outline of Abnormal Psychology. A.S. Barnes & Co.  Adapted from original text in the Proceedings of the American Society for Psychical Research 9.  Retrieved October 15, 2018 from https://www.survivalafterdeath.info/articles/prince/doris.htm

All articles are available for a fee here.

The Psychic Detective: Some of the Pitfalls in the Path of the Psychic Investigator, and how he avoids them. July 1, 1922

Experiences Which I Cannot Explain Away: Are the Observations of This Noted Investigator Explainable by Mental Telepathy? December 1, 1924

My Doubts About Spirit Photographs. December 1, 1925

The Riddle of Patience Worth: Here Are Presented the Records, to Date, of an Investigation Conducted in a Scientific Manner by a Serious Seeker After the Truth. July 1, 1926

Specimens from the Telepathic Mine: There Is a Mine of Interesting Evidence Tending to Establish the Genuineness of Thought Transference. September 1, 1927

Extra-Sensory Perception: Results of a Remarkable Series of Controlled Experiments for Telepathy and Clairvoyance. July 1, 1934.

The Psychic in the House. Boston, 1926: Boston Society for Psychical Research. 2010: Kessinger Publishing.  (Detailed account of Doris Fischer’s time as part of the Prince household after the integration of her alters and associated mediumistic phenomena.)