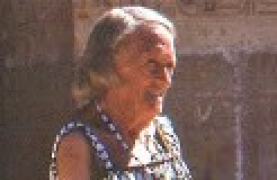 Dorothy Eady was a British woman who as a small child became unaccountably obsessed with ancient Egypt following a near-fatal accident. She became a respected Egyptologist under the name of Omm Sety, and in later life lived near the ruins of the temple in which she claimed to have lived as a priestess.

Details of this case are found in Jonathon Cott’s biography The Search for Omm Sety (1987). It was not investigated, and only a few of the ‘past life memories’ were independently corroborated, but it is a richly detailed, much-discussed and controversial case.

Dorothy Louise Eady was born on 16 January 1904 in a suburb of London.1 Her father was a master tailor who went on to become a cinema entrepreneur. Aged three, she fell down a set of stairs and was found unconscious: a doctor declared her dead. However, an hour later she was found playing on her bed, showing no sign of injury. Shortly after the accident she began to have recurring dreams, in which she saw a huge building with columns and a garden filled with fruits and flowers. Often her mother would find her weeping, and when she asked why, the child would say ‘I want to go home’, refusing to accept that she already was home.

As a young child, Eady displayed behaviours suggesting an obsession with ancient Egypt. During a visit to the Egyptian galleries at the British Museum, she ran through the displays kissing the feet of the statues, saying, ‘These are my people’, and was unwilling to leave. She constantly demanded that a chapter on ancient Egypt in a child’s encyclopedia be read to her. At six, having learned to read English, she stated that hieroglyphic writing was familiar, to her, but that she had forgotten how to read it. About a year later, she saw pictures of the Temple of Seti I in Abydos, Egypt, and claimed it was the building of which she had dreamed. ‘This is my home!’ she told her parents. ‘This is where I used to live! But why is it all broken, and where is the garden?’ Seeing a picture of the well-preserved mummy of Sety I, a late thirteenth century BCE pharaoh, she claimed to have known him personally.

Aged ten, Eady was noticed by the eminent Egyptologist EA Wallis Budge of the British Museum, who agreed to teach her hieroglyphics.

At fourteen, she experienced a night-time vision of Seti I, with an expression ‘of somebody in hell who has suddenly found a way out’. She also had a recurring dream in which she and other Egyptian women and girls lay on rush mats in an enormous room, and an old man carrying a lamp checked to see if they were in their proper places.  In a subterranean chamber, a high priest interrogated her and beat her when she refused to answer.

At the age of 27, Eady began writing and drawing cartoons for an Egyptian magazine. Marrying a young Egyptian, Imam Abdel Meguid, enabled her to obtain Egyptian citizenship and move to Egypt.

By Eady’s account, the spirit of Seti I made more visits and was seen by family members and others. She often got up at night and wrote in hieroglyphics, telling her husband she was writing down details of her past-life that a being named Hor-Ra was dictating to her.

Past Life in Egypt

The story given to her was as follows. She was born to a soldier and a vegetable seller who named her Bentreshyt, meaning ‘harp of joy’. After her mother died she was raised as a priestess. At fourteen, she was noticed by the young king Seti who was visiting the temple, and they had a short affair.  Found to be pregnant, she was interrogated by the high priest and beaten when she refused to answer, a scene that corresponded to her childhood nightmare. Eventually she confessed that her lover had been the king, and committed suicide to spare him embarrassment. But she remained in love with him and was happy when his spirit joined hers between incarnations.

Eady and her husband divorced in 1936. She moved to a village near the Giza pyramids with their young son Seti and found work with the Egyptian Department of Antiquities, the start of a long career in Egyptology. She participated in digs, made copies of artwork, and authored papers, working with leaders in the field such as Selim Hassan, Ahmed Fakhry and Labib Habachi.

In 1952, Eady made her first visit to Abydos. At the temple that Seti had built, she said she felt ‘as if I’d walked into a place where I’d lived before’. In a test set by the chief inspector of the Egyptian Department of Antiquities she claimed to have been able to locate certain scenes depicted on wall murals in pitch darkness; she also marked the location of the garden she recalled, where a dig later revealed ancient tree stumps. She remained in Abydos to the end of her life, helping with archaeological work at the temple of Seti and other sites, and later working as a tour guide. It was here she acquired the name she is best known by, Omm Sety, meaning ‘mother of Sety’.

In Abydos, Eady became close to the Egyptian industrial chemist and amateur Egyptologist Hanny El Zeini, to whom alone she confided her visitations by Seti. El Zeini corroborated Omm Sety’s knowledge of the location of the temple garden, having witnessed the digging up of an ancient stump there himself. He also reported that an Egyptian antiquities inspector confirmed Omm Sety’s correct location of the garden and had been instrumental in the discovery of a tunnel running under the temple. The inspector is said to have added that her help would be ‘indispensable’ for future archaeological work on the Abydos site.

Omm Sety died on 21 April 1981 and was buried in the desert near the local Coptic cemetery.

El Zeini recalled Omm Sety saying that the diary of Seti and a treasury are hidden somewhere underneath the Temple of Sety. If so, they have yet to be discovered.

In a 2015 paper, archaeologist Nicholas Reeves argues from clues in wall artwork and decorations that the (undiscovered) burial chamber of Nefertiti, consort and successor of the heretic pharaoh Akhenaten, lies adjacent to the tomb of Tutankhamen. Omm Sety was at least partly inspired this notion, as Reeves quotes her in the epigraph:

‘Now, about the tomb of Nefertiti’, [Omm Sety] continued, sounding a bit hesitant. ‘I did once ask His Majesty [Seti I] where it was, and he told me. He said, “Why do you want to know?”, I said I would like to have it excavated, and he said, “No, you must not. We don’t want anything more of this family known.” But he did tell me where it was, and I can tell you this much. It’s in the Valley of the Kings, and it’s quite near to the Tutankhamun tomb. But it’s in a place where nobody would ever think of looking for it,” she laughed. “And apparently it is still intact…”2

Biographer Jonathon Cott solicited the view of experts in different fields with regard to Eady’s claims. Carl Sagan, an American scientist and noted sceptic of paranormal claims, considered fantasy to be the most economical explanation. He noted that humans are predisposed to believe in life after death as opposed to non-existence and argued the burden of proof is on proponents of reincarnation to provide evidence. He pointed to lack of corroboration as a major weakness:

It is striking how many of the supposed corroboratory stories and anecdotes flow through Dorothy Eady herself – in her diaries, and in her stories told to Egyptologists, journalists, and friends. There is, for example, no independent record – a letter written by her father, say – even about her early conviction that ancient Egypt was ‘home’, much less that she correctly ‘remembered’ the original state of the Temple of Abydos. There is nothing in her knowledge of ancient Egypt that requires more than a quick and insightful mind devoted to the subject, and there is certainly no evidence presented, other than Dorothy Eady’s own accounts, of friends and relatives walking in on her encounters with some manifestation of the Pharaoh Seti.3

A psychiatrist specializing in adolescent behaviour speculated that Eady’s childhood fall at age three might have caused brain damage that led to long-term ‘characterological discomfiture’, which she ameliorated by embracing an obsession.4

Psychologist Michael Gruber pointed out that her evident ability to function normally means Eady could not be called insane, and that her experience ‘yielded a meaningful life. If our criterion of health or sanity has to do with whether one can live in a creative, compassionate, and disciplined way, then Omm Sety surely did that.’ He noted that her belief was not merely personal, but touched also on matters of history,5 and that her firm belief in Seti as a guide did much to enable her contribution to Egyptology.6

Remote-viewing researcher Stephan A Schwartz rejects Eady’s certainty that she was reincarnated, arguing that her experiences could be explained by a collective consciousness and/or remote viewing. However Schwartz accepts that what she believed might have been true.7 Reincarnation researcher James G Matlock notes that the collective consciousness hypothesis does not explain why subjects focus on one previous person’s memories to the exclusion of anyone else’s.8 He also argues that psychic explanations for apparent reincarnation cases – that the veridical information exhibited in past life memories could be gained by ESP –  sometimes requires an extension of known ESP abilities to ‘super-psi’, an ability to acquire information from multiple sources whose existence is hypothetical and lacks substantiation.9

Omm Sety and Her Egypt was shot on site by Julia Cave of the British Broadcasting Corporation, focusing on Abydos and its excavations as described by Omm Sety and with additional interviews with Egyptologists TGH James and Rosalie David. It was broadcast in May 1981. A London Times reviewer wrote: ‘An incredulous smile froze on my lips as I watched the Chronicle film Omm Sety and Her Egypt. Could I be absolutely positive it was all a lot of eyewash? Of course I couldn’t. And neither will you be able to.’10

Egypt: Quest For Eternity was made by producer Miriam Birch for the National Geographic Channel at about the same time, concentrating mostly on Rameses II. It featured the staff of Chicago House in Luxor, including Egyptologists Kent Weeks and Lanny Bell, as well as Omm Sety, who was celebrating her seventy-seventh birthday. She was carried to the temple of Abydos for the shooting and is seen using a walker. It was her last visit to the temple,11 as she died three days later. This documentary can be viewed on YouTube here.12

Numerous other videos, websites and articles about Dorothy Eady/Omm Sety are available on the Internet.

Omm Sety (1949). A Dream of the Past. Egyptian State Tourist Board. (This tale of Egyptian life as illustrated by wall-paintings in the Temple of Seti is quoted in full, complete with Omm Sety’s illustrations, by Cott.13)

Omm Sety, ed. Hansen, NB (2008). Omm Sety's Living Egypt: Surviving Folkways from Pharaonic Times. Chicago: Glyphdoctors. (Omm Sety was struck by similarities between ancient Egyptian customs and current customs she observed among local people in Abydos; this book is a compilation of her writings on the topic.)

According to Cott, many well-known Egyptian, American and English Egyptologists have stated publicly that ‘quite a few’ publications under others’ names were largely edited or written by Omm Sety.17 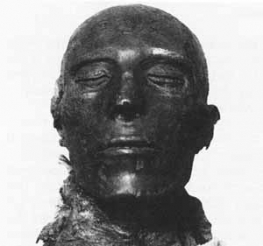 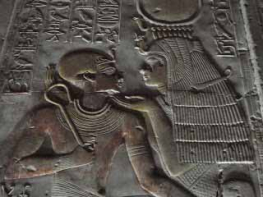 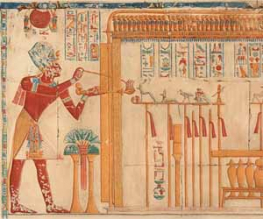 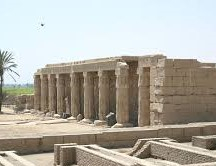