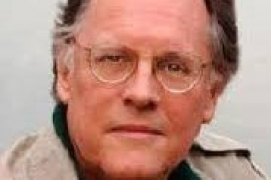 Stephan A Schwartz is an American consciousness researcher, future trends analyst and author.  His experimental research focuses on remote viewing, which he has used to make significant discoveries in the field of archaeology.  Schwartz is especially concerned with the means of creating social transformation and is founder and editor of the Schwartz Report, a website containing fact-based articles on environmental, social and political matters.

Schwartz’s father was an anaesthesiologist, his mother a nurse. Schwartz credits their lack of interest in religion and strong commitment to medical science, especially consciousness, for giving him ‘an open-minded sense of consciousness as a thing unto itself’.1

As a twelve-year-old he was sometimes allowed to observe surgeries inside the operating room. On one occasion an emergency arose during an operation on a teenage girl: on regaining consciousness she told Schwartz’s father that she had risen above her body; then, finding no one would listen to her, went to the nurses’ station where she observed a doctor flirting with one of the nurses.  She also said she crossed the city to observe her grandmother.2  Her descriptions were found to be correct in numerous details.  Schwartz heard his father relate this account to medical colleagues, many of whom responded with similar stories.

Schwartz had another apparently-paranormal experience when, having served a tour in the US Army as a conscript, he was visiting Williamsburg, Virginia, where his mother’s family had lived since the 1600s.  Walking in a colonial-era street at night he encountered a man dressed in period costume, who entered a house by walking through the closed front door.  A local historian traced the address to an ancestor of Schwartz, whose portrait he recognized as the ghost.3

Aged 24, Schwartz experienced a spiritual crisis, realizing that he lived by shallow values and lacked a meaningful inner life.  At this time he was introduced to the work of the healing psychic Edgar Cayce and reviewed some of Cayce’s readings on a visit to the Association of Research and Enlightenment (ARE) in Virginia Beach. Many of these impressed him, in particular one which contained ancient information that was unknown to historians at the time of the reading but that was verified eleven years later following the discovery of the Dead Sea Scrolls.

Schwartz remained at ARE for five years, studying the Cayce readings and the major texts of all religious faiths, also the works of Steiner, Blavatsky, Bailey and other spiritual thought leaders. He was interested not in the dogmas but the experiences in what he terms the ‘nonlocal’ consciousness of each tradition’s founder. He familiarized himself with parapsychology, particularly the work of JB Rhine and Ian Stevenson. He was also impressed by the archival diligence of  Cayce’s lifelong secretary Gladys Davis, an influence he carried into his own work.

Schwartz attended two healings by the Shoshone shaman Rolling Thunder, watching as he appeared to draw out the misty form of a wolf from an injured boy, whose wound healed immediately. Rolling Thunder’s work especially convinced Schwartz that his way forward was experimental, paving the way to his parapsychological achievements. He writes, ‘I began comparing the findings of modern science with what I already understood to be empirically developed sciences like shamanism and the enduring spiritual traditions; all of which recognize, when you strip away the dogma, that consciousness is the fundamental’.4

In 1971, Schwartz began working for the American government, writing speeches for President Richard Nixon, secretary of defense James Schlesinger, and US Navy commanders.5 He was one of a small group that transformed the American armed forces from ‘a racist, elitist, gender discriminating conscription force into an all-volunteer meritocracy’.6 Disillusioned by the Watergate scandal, he left to pursue a career in consciousness research and dissemination to the public, which he continues to this day.

Among other awards, Schwartz has received the Parapsychology Association’s ‘Outstanding Contribution Award’ for 2017.7

Stephan Schwartz married his first wife, Hayden Oliver Gates in 1981 and was widowed in 2001. His second and current wife is Ronlyn Arnatt.  He has a daughter, Katherine Rowland Schwartz, and a step-daughter, Lea Meyers.

In Schwartz’s first experiments with remote viewing – or ‘distant viewing’ as he termed it then – he laid out a 12x12 square grid in his backyard, buried an object and persuaded volunteers to try to psychically determine which of the 144 squares held the object, and identify it.  Results were statistically significant in both respects. This was the start of the remote viewing protocol he continues to use.

In the early 1970s, some parapsychologists argued that psi might be an electromagnetic phenomenon. This was largely disproved by the Soviet parapsychologist Leonard Vasiliev, who established experimentally that psychics could obtain veridical information while shielded in Faraday cages and deep caves, which blocked electromagnetic transmission. Schwartz reasoned that if psi worked electromagnetically it must be at extremely low frequencies (ELF) of 300 Hz or less, which he knew from his naval experience could penetrate deep below the surface of the ocean.  Denied the use of a submarine, Schwartz put this inquiry on hold, but was encouraged to learn, from a 1974 paper by Russell Targ and Hal Puthoff  about remote viewing research at the Stanford Research Institute,8 that others were thinking along the same lines.

Schwartz turned to studying oracular and shamanic rituals, which involve what he terms ‘a state of intentioned consciousness’, to try to find the optimal conditions for a person to have an experience of nonlocal consciousness. He realized that archaeology would be an ideal testing-ground for remote viewing because it involved truly blind targets.

He started by researching whether anyone had tried psychic archaeology previously, gathering information for a book, The Secret Vaults of Time. This covers previous twentieth century digs that had been aided by insights gained psychically, some by the Canadian George McMullen, with whom Schwartz himself would eventually work.

In 1976, Schwartz collaborated with an archaeologist to try to trace an idol and archaeological sites in Mexico. Schwartz reports that the remote viewing aspect worked but the fieldwork, which he did not direct, was incomplete and gave poor feedback.9

Later that year, Schwartz was given access a research submersible, which he used to undertake Project Deep Quest in collaboration with psychics Ingo Swann and Hella Hammid. In a filmed experiment, each was given a chart of 1,500 square miles of ocean to scan by remote viewing; both independently located a shipwreck in the same spot, and artifacts that would be found there. These predictions proved accurate.  Swann and Hammid succeeded in remote viewing target scenes on land from the submersible, at a depth that made ELF transmission highly unlikely. Both tests disproved the theory that psi is an electromagnetic phenomenon.10 ‘Deep Quest’, Schwartz writes, ‘set the pattern for the archaeological research I would do over the next two decades’.

Schwartz’s next project is his best known: psychic archaeology tests in the Egyptian city of Alexandria, which he chose for its importance to the intellectual heritage of the West.11  He secured funding and began building his team in the fall of 1978.  To try to enhance the accuracy of the remote viewing he used fifteen psychics, both experienced and beginners, to obtain consensus findings.  Each was given a map and asked to look for the lost tomb of Alexander the Great and the remains of the Library of Alexandria.

Three common areas were pinpointed by the viewers, including one linked in city folklore to Alexander’s resting place, the Nebi Daniel mosque in central Alexandria. Several psychics also said they sensed something significant in the waters of the city’s East Harbour.

Schwartz chose two expert psychics, Hella Hammid and George McMullen, to travel to Alexandria for onsite viewing. They pinpointed and explored several important sites, discovering many correspondences between their intuitions and known histories.  Both were drawn to the Nebi Daniel mosque; McMullen felt certain that Alexander’s tomb, broken up but still identifiable, lay about 25 feet below it, although he also believed no human remains were there. However, an attempted excavation was interrupted for lack of government permissions and remains uncompleted.

Greater success was achieved at Marea, a buried city at a site 43 kilometres from Alexandria, where McMullen staked out ground under which he had viewed the ruins of a building. Excavation proved both psychics’ viewing correct on many points and more accurate than electronic sensing, which had been tried earlier and found nothing.12

Egyptian officials were impressed by these results and now supported underwater exploration in the East Harbour.  Based on information provided by psychics, Schwartz and his dive crew found statues and ruins of major importance, including palaces built by Mark Antony and Cleopatra and the remains of a massive building that appeared to have been the famous lighthouse of Pharos.  Schwartz wrote up these findings,13 but the project was at first sensationalized and then attacked by the media through quotes from skeptics.  It was ignored by the academic community, which refused to publish Schwartz’s papers.  In the mid-1990s, a French-Egyptian archaeological team claimed credit for discovering the ruins.

Schwartz’s other expeditions of this type include:

Schwartz, helped by OMNI Magazine and the Los Angeles Weekly, performed a large-scale international test of precognition in which tens of thousands of people participated.16 He concluded that people who are ‘open-minded, tolerant, and creative’ are most successful as psychics.17

An early informal experiment showed that people tasting two glasses of wine routinely preferred the one on which meditators had focused good intentions rather than the control. Schwartz subsequently obtained significant results in a test of whether healing intention could change the molecular structure of water as measured by infrared spectrophotometry.18

Schwartz’s current research is inspired by the threat posed by climate change. It studies how nonlocal consciousness affects social systems and how individuals and small groups can influence the course of history.  He views climate change as a problem soluble only through post-materialist science.19

Schwartz is founder and editor of the Schwartz Report website, which he describes as ‘an entirely fact-based daily publication in favor of the earth, the inter-connectedness and interdependence of all life, democracy, equality for all, liberty, and things that are life-affirming’, offering regular articles to ‘warn readers about actions, events, and trends that threaten those values’. He writes: Our country now stands at a crossroads; indeed, the world stands at a crossroads where those values are very much at risk and it is up to each of us who care about wellbeing to do what we can to defend those principles.’20

Schwartz has written extensively for peer-reviewed academic journals on research in exceptional human performance, and research in social values, social outcomes, social transformation and future trend analysis. Publications include Explore: The Journal of Science and Healing; Subtle Energies  (Journal of the International Society for Subtle Energies and Energy Medicine), Research in Parapsychology and Journal of Parapsychology.  See here for a full list.

For comprehensive information about Stephan Schwartz, including courses on remote viewing, see his curriculum vitae here and his website stephanaschwartz.com