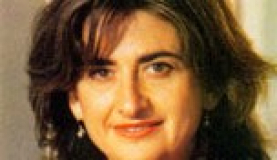 Elisabeth Targ (1961-2002), daughter of American parapsychologist Russell Targ, was a psychiatrist and pioneer in the field of mind-body medical research, whose 1999 study on the effect of prayer on AIDS patients was the cause of controversy.

Elisabeth Targ received her MD and a master’s degree in neuropharmacology from Stanford University. She was a pioneer in the field of mind-body medical research, holding the posts of professor of clinical medicine at the University of California, San Francisco, and director of the Complementary Medicine Research Institute at the California Pacific Medical Centre.  She was editor of Alternative Therapies and a regular contributor to Spirituality and Health Magazine.

The daughter of veteran parapsychologist Russell Targ, Elisabeth was involved in psi research in early childhood, and performed outstandingly in informal testing.1

The term ‘distant healing’ describes the focused mental intent of one person to affect positive changes in the wellbeing of a remotely located individual. In a review published in 1997, Targ summarizes numerous, well-controlled experiments that demonstrated distant mental influence on humans, animals, and other biological systems. Insufficient formal clinical research prevented Targ from drawing definitive conclusions; however, she made suggestions for methodological improvements.2

In 1999, Targ and co-authors published the results of a study of distant healing by prayer of AIDS patients. Forty patients with advanced AIDS were matched for age, CD4 count and AIDS-defining illnesses and randomly selected to either the distant healing or no-treatment control condition. After six months, individuals who were prayed for had fewer illnesses (p = 0.04), fewer doctor visits, (p = 0.01), and fewer days in hospital (p = 0.04). Targ concluded that a distant healing effect in AIDS had been demonstrated.4 It was later revealed that the study was insufficiently blinded and statistically flawed.5 No distant healing effect was observed when more appropriate statistical techniques were applied in a larger study with 156 AIDS patients.6