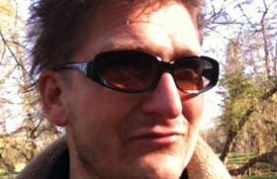 The Felix Experimental Group (FEG) is a circle for physical mediumship organized initially in 2005 by Kai Mügge from Hanau, Germany. Kai has since become the group’s medium. Both the magnitude and diversity of phenomena have increased dramatically from the early days of the FEG, and Kai has established a considerable reputation worldwide. Although evidence of at least occasional fraud began to surface in 2011, some continue to maintain that not all of Kai’s phenomena can be dismissed as fraudulent.

History and Development of the FEG

Kai claims to have a background in marketing and sales, and he has also worked as a documentary filmmaker, producing three films about heroin use in Frankfurt. In a 2015 interview Kai claims that his introduction to the paranormal traces back to the age of three or four, when he had some visionary and out-of-body experiences.1 Kai also claims to have seen spirits of both the living and the dead from that period on. However, that entire account is doubtful. Kai remarked to investigators Michael Nahm and Stephen Braude, on different occasions, that he was surprised to find that he had psychic abilities. The FEG began without any group member functioning as a medium. Kai’s apparent mediumistic abilities surfaced only later, when he started holding cabinet séances (and, his detractors would say, at the point when he began to realize that a mediumistic evolution of a table séance group could be profitable). And his assertions about his early spiritistic experiences surfaced only around the time Julia, a committed Spiritualist who later became his wife, entered the picture.

A more consistent and persistent story is that after witnessing some large-scale poltergeist events in the home of a friend when he was eleven years old, Kai became interested in physical mediumship. He then formed the first of several sitter groups when he was fifteen. The dominant (and perhaps the only) phenomena occurring during those sessions were table movements. During this time, Kai also developed both an interest and expertise in hypnosis.

Kai’s séances almost invariably occur (or at least begin) in darkness. After several years of conducting only table séances, Kai added cabinet séances to the FEG agenda, during which he was ostensibly overtaken by the spirit of the late parapsychologist, Hans Bender. In these séances, modeled intentionally after those of the famous late nineteenth and early twentieth-century physical mediums, Kai would enclose himself in a curtained ‘cabinet’, and then after ‘Hans’ had taken control, raps, object movements, and touching of sitters would occur, apparently outside Kai’s reach, and apports of various kinds would be produced.

Beginning around 2010, ectoplasmic phenomena were added to Kai’s repertoire and became one of the most regular occurrences.2 At first, these were limited to hand-like protrusions issuing from Kai’s mouth or appearing on his shoulder. But later they evolved into large quantities of material which Kai would pull from his mouth and which would then rest on the floor, seem to move or ‘breathe’ in and out, and from which would sprout arm-like’ stalks with little hands on top, which would turn back and forth. These phenomena later became even more complex, with the masses of material containing images of faces, and sometimes seeming to develop into rudimentary forms of human figures. And along with the development of the ectoplasmic phenomena, Kai began to display more elaborate apport phenomena, including the appearance of various crystals or gems, emerging from his eyes or mouth.3

Documentation and Control of the Phenomena

As word spread about the FEG, Kai attracted the interest of various veteran psi researchers, and Kai soon recognized the value (if not necessity) of allowing investigators to control him during production of the phenomena. Kai consistently claims that the phenomena hide from the light, and he resists the use of infrared recording (apparently not appreciating that the incandescent red light he occasionally permits during séances actually generates more IR energy than the IR lamps used for infrared video). Nevertheless, Stephen Braude managed to record one table levitation in infrared, which is unfortunately partially obscured by Kai’s back.4

During table séances, Kai has allowed adjacent sitters to control his hands and legs, and during cabinet séances Kai has permitted investigators to control all four of his limbs while phenomena occurred well outside his reach. Sometime that four-limb control allowed for holding the hand of Kai’s wife, who usually sits next to him during those séances. Kai has permitted strip searches (and inspection of his clothing and shoes) prior to cabinet séances in which ectoplasm is produced. He has not yet submitted to full cavity searches, or other controls (e.g., wearing sealed boxing gloves or one-piece suits) that would help rule out the suggestion that he hid fake ectoplasm in his rectum.

There are two main reasons for taking that last hypothesis seriously. The first is that drug mules often use the rectum as hiding place, and this is something Kai certainly knows from his immersion in the Frankfurt drug scene. And perhaps more important, it is not unprecedented for physical mediums to stash material in their rectums. Probably the most notorious case of that kind is that of the Hungarian medium Ladislaus Laszlo, mentioned by Nahm in his 2014 report.5 In addition to using his rectum as a hiding place, Laszlo conducted cabinet sittings in a way that facilitated cheating, and Kai’s cabinet séances suffer from the identical lack of control. As Eric Dingwall observed about ‘the enormous importance of the hand-control’ in the case of Laszlo,

if the hands are held then the arrangement of the products [e.g., ectoplasm] becomes a matter of some difficulty. Laszlo’s hands were sometimes held and sometimes not. Often the hands were free behind the curtains between the appearance of different phenomena .6

Similarly, many sitters during Kai’s cabinet séances have observed that Kai spends considerable time behind closed curtains before and between phenomena, that in many cases they hear noises coming from the cabinet, and that those noises could easily be interpreted as Kai retrieving ‘products’ from previously unexamined or undetected locations.

The Austrian Sittings in May, 2013

In order to investigate Kai’s phenomena under better controls than had previously been enforced, Stephen Braude arranged for a week-long session at the private farmhouse near Salzburg of his videographer, Robert Narholz. The participants were kept to a minimum, and consisted (in addition to Braude, Narholz, and Kai, Kai’s wife Julia, biologist and psi researcher Michael Nahm (who had investigated the FEG since 2008), and former circle leader and noted cardiologist Jochen S (pseudonym) and his wife Anna. Kai was comfortable and familiar with all participants.

The farmhouse was very well suited to this investigation, and it was prepared in numerous ways to prevent possibilities of cheating during and in between sittings.7

Three table séances were held, and these yielded several full levitations, one of which was video recorded in red light, stills from which can be found in the published report on the Austrian sessions.8  Kai’s feet and those of most others are clearly visible on the floor, and sitters’ hands (but not all thumbs) are clearly visible on the table top.

Video recorded in red light shows Kai pulling a considerable quantity of ectoplasm from his mouth, which landed in front of him on the floor, and which he pulled apart, revealing some of its structure. The material had no discernable odor, and it showed no evidence of Kai’s meal less than two hours before, or of the large quantity of black tea Kai had been drinking as recently as immediately before his strip search. After retreating into the cabinet, Kai emerged again and showed a glowing green ectoplasm which he spread apart and brought within two inches of Braude’s face. After the séance, Braude remained in the séance room to re-inspect the cabinet (nothing suspicious was found there). Still images from the video can be viewed in the published report on the Austrian sessions.

First rumors of fraud emerged after a former core member of the FEG left the circle in 2011 and accused Kai of producing fraudulent phenomena and also faking his trance. Peter Mulacz also claims to have observed indications of fraud,9 but his allegations remain largely speculative and unconfirmed. However, while Nahm and Braude were preparing reports on Kai for publication in the Journal of Scientific Exploration, Nahm discovered compelling evidence that Kai had employed a magic trick to produce moving lights in six uncontrolled public sittings held between 2011 and 2013. The details of those revelations were sketched only briefly in the published 2014 JSE reports,10 but they were presented fully in a subsequent 2016 report written by Braude.11

Furthermore, Nahm presented additional evidence for fraud noted in 2012 and reasons for thinking that certain types of Kai’s ectoplasm, including the glowing type he showed during the cabinet sitting in Austria, were simply Halloween-style ‘cobweb’. These charges also connected to reasons for thinking that Kai’s ‘trance’, in which his waking consciousness is allegedly overtaken by ‘Hans Bender’, is also fraudulent.12

Nahm reasons, in part, that various of Kai’s standard phenomena at public demonstrations occurred during sittings when (and sometimes immediately after) Kai also produced the undoubtedly fraudulent moving lights. Since the latter were produced consciously, it seems likely that accompanying phenomena were produced consciously as well, and that contrary to what Kai maintains, he was not in a trance in which his waking consciousness was replaced entirely by that of ‘Hans Bender’. Considered in that light, the manifest similarity between Kai’s Austrian ectoplasm and that produced along with the fraudulent moving lights, suggests strongly that both are equally fraudulent. The Austrian ectoplasm is shown in Figure 1, and the ectoplasm produced on one of the occasions of the fraudulent moving lights is shown in Figure 2.13 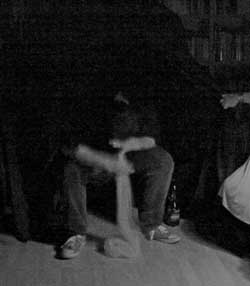 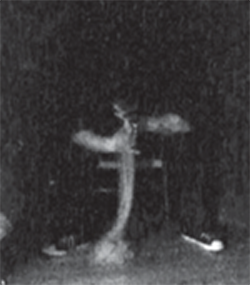 Because it is undeniable that Kai has learned and deployed a magic trick on at least a few occasions, one has no choice but to consider how many others he might have in his repertoire and use with impunity in darkness. To help address that issue, Braude conducted follow-up séances in Germany in 2015.14 He argued that, although it remains speculative whether Kai hid fake ectoplasm in his rectum for the 2013 Austrian séances, the most compelling of Kai’s phenomena continue to be object movements at a distance while under four-limb control and especially table levitations.15 So Braude attempted to document the levitations more clearly than he had managed to do during the Austrian sittings, hoping to establish thereby that at least that particular FEG phenomenon was genuine. In that respect, the 2015 sessions were a failure, although some intriguing and seemingly difficult-to-explain phenomena occurred beyond Kai’s reach during the four sessions held.

For reasons outlined in Braude, 2016, it seems unlikely that Kai will submit to further careful study. So the significance of the case will probably remain indeterminate. Kai has not admitted publicly to having cheated (his only explicit and tacit admissions have been private), and he has shown no further willingness to demonstrate even more clearly than before that his least controversial phenomena are genuine.16 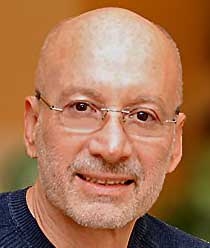 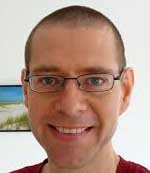