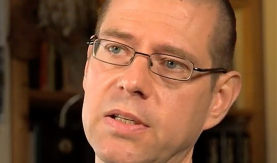 Michael Nahm is a German biologist and parapsychologist whose psi research has focused on terminal lucidity, near-death experiences, cases of the reincarnation type, physical mediumship, hauntings, the history of parapsychology, and various other riddles of the mind and the evolution of life.

Michael Nahm credits a broad-minded high-school biology teacher for encouraging his interest in philosophy and biological questions such as the origin of life and genetic mutation. In the 1990s he discovered the works of Rupert Sheldrake and, enthralled by Sheldrake’s pushing of the limits of established science, began attempting experiments himself on dogs mysteriously knowing when their owners would return, waking a person from sleep telepathically and other topics. Nahm credits Sheldrake for fostering in him the ‘confidence that one can contribute to researching so-called anomalies also privately without belonging to the in-group of responsible experts, and without affiliation to a relevant academic institution’.1

Nahm finished his studies in biology with examinations in zoology, botany, genetics and palaeontology, and a diploma thesis on the roosting behaviour of migratory songbird species. His doctoral dissertation discussed the physiological responses of beech trees to drought stress. He went on to conduct international research projects in forestry science.

Writing a book on unsolved riddles of evolution2 triggered a permanent strong interest in parapsychology for Nahm, as he realized that paranormal phenomena posed the greatest challenge to the reigning materialistic and neo-Darwinian paradigm of biological processes, including evolution.3 This led him to investigate a wide range of anomalous biological phenomena, his lines of inquiry altering over time, though he has developed a holistic approach to evidence for post-mortem survival as he describes in a 2011 paper.4

For many years this work was avocational, but in 2018 he accepted an appointment at the Institut für Grenzgebiete der Psychologie und Psychohygiene (IGPP) (Institute for Frontier Areas of Psychology and Mental Health) in Freiburg, Germany, where he is now able to pursue his parapsychological work professionally in an academic institution.

Nahm sees parapsychology not as a rogue child on the margins of science, but actually as the key to gaining a full understanding of biology. While reductionist materialism works for studying classical physics and the simplest biological processes, and what some term ‘organicism’ is appropriate for more complex living systems, he explains in an interview:

When it comes to studying even more complex living systems, including human beings, the unfolding of consciousness, psi, postmortem survival, or possibly evolution as a whole, I think that ultimately, only a kind of neo-vitalistic and dualistic approach is appropriate. Finally, when we look at the fundamental levels of reality with a metaphysical slant, we might apply a holistic and monistic approach in which the dualistic properties present on lower levels of biological organization are regarded as complementary and as originating in an initially unified source at the heart of being.5

The term terminal lucidity was coined by Nahm in a 2009 paper6 and is defined as the sudden (re-)emergence of normal or unusually enhanced mental abilities in dull, unconscious, or mentally disabled patients shortly before death.7 Due to media and public interest in the phenomenon, Nahm is probably best known for this work.

Nahm and co-authors discuss cases of terminal lucidity (which they term ‘paradoxical lucidity’) in which unexpected cognitive functions in patients with severe neurological deficits – dementias, organic brain disease and severe mental illnesses – briefly return around the time of death. In a 2019 paper they review this and related phenomena seeking potential biological mechanisms, and discuss the ethical implications and methodological challenges facing controlled investigations. They conclude that the phenomenon, if confirmed by more rigorously controlled research, challenges standard neurological models, carrying potentially profound implications for treatment of such conditions.8

Nahm’s delving into the literature of near-death experiences (NDEs) has resulted in numerous publications. In the aforementioned 2011 paper, he draws attention to the relationships and similarities between NDEs and unexplained physical changes during NDEs, reciprocally confirmed out-of-body experiences/crisis apparitions, shared NDEs and shared dreams, common content in NDEs, death-bed visions, reincarnation cases with intermission memories and after-death communications through mediums, terminal lucidity and some other phenomena related to death, showing how these phenomena all point at a single process.9

In 2020, Nahm co-authored a paper which used the existing NDE literature as well as an online survey on autoscopy in NDEs – seeing one’s body from a viewpoint outside it, usually above – to test the hypotheses that brain oxygen deprivation makes it impossible for NDEs to be experienced in real time and therefore they must be reconstructed after the brain has at least partially recovered. The findings suggested otherwise, and the co-authors recommended that future discussion and research on NDEs explanations should focus on two possible models: a neurophysiological model allowing for real-time NDEs, or a model which allows that ‘NDEs occur in relative independence from the prevailing neuro-physiological processes in the brain’.10

Nahm found that NDEs reported in ancient Rome share some features with current Asian cases, such as the subject learning their NDE was being caused by the wrong person having been designated to die, as well as featuring xenoglossy and an apparently correct precognitive prediction in one case.11 (See also Medieval Near-Death Experiences.)

Neuroscience posits that human mental functions are generated by brain structures, notably cell layers and tissues in the neocortex. Nahm and co-authors discuss cases in which significant physical deficiencies are found in the brains of individuals who outwardly perform normally or who even display special abilities. These include cases of hydrocephalus – in which accumulating cerebral fluid pushes the brain to the extreme margins close to the skull – and hemispherectomy – in which an entire hemisphere was removed because of conditions such as epilepsy. Nahm and co-authors also consider the abilities of ‘savants’ who display remarkable talents in the presence of compromised brain function. Explanatory models based on extreme brain plasticity and non-reductionist accounts of consciousness are discussed.12

In an afterword to James G Matlock’s Signs of Reincarnation (2019) Nahm discusses the importance of childhood reincarnation evidence for understanding evolution. He argues that, since such evidence tends to contradict standard materialism, a more holistic view of evolution needs to be available. Nahm describes an organismically-oriented and vitalist view, where evolutionary processes tap into a fundamental fabric of reality – the same foundations that drive the evidence for past lives.13

Despite extensive scientific interest, the homing abilities of animals remain largely mysterious. In a 2015 paper, Nahm discusses the work of two hitherto little-known researchers that include remarkable instances of dogs who repeatedly returned to their owners from unknown locations. One archive details the research of Edwin H Richardson with messenger dogs in World War I. The other concerns  more  systematic  experiments performed by Bernhard  Müller between 1953 and 1962 involving 75 dogs. Both authors refute normal sensory explanations for their observations. Nahm finds little consensus among animal experts for bird and mammal homing and argues that some underlying psi component should not be ruled out.14

Nahm reports on the activities of German physical medium Kai Mügge and the Felix Experimental Group (FEG), describing his observations during 21 sittings over a period of more than four years. The phenomena typically included unusual movements of a table, raps on the room walls and the ceiling, luminous and psychokinetic phenomena, and the appearance of putative ‘ectoplasm’ and apports. He concludes that most if not all of these occurrences were fraudulently produced.15

Nahm discusses the phenomenon of sudden hair whitening occurring within hours or days of emotionally traumatic experiences. Since developed hair has no metabolism, it should be impossible for such changes to occur through normal biological processes. He discusses 212 cases in the last 200 years, of which 46 are well-documented and authenticated by physicians. Nahm finds evidence for an anomalous process that may be need to be accounted for by non-causal modelling.16

In September 2021, Nahm published a paper revealing massive and longstanding plagiarism and data misrepresentation on the part of Argentinian parapsychologist Alejandro Parra. Parra had been suspected of plagiarism and urged to cease and desist by colleagues as far back as 1991, but it was not until Nahm’s carefully and extensively researched paper was published that his dishonesty was fully exposed, dating back even to his PhD dissertation. Contacted privately by Nahm prior to publication, Parra offered various excuses and even blamed his students for including stolen texts published under his own name, but continued to promote his books. Nahm concluded that none of Parra’s work is to be trusted unless very carefully checked.17

Parapsychologist Etzel Cardeña, in a commentary in the same journal issue as Nahm’s paper, pointed out how damaging Parra’s fraud was in a field upon which sceptics frequently pounce with accusations of fraud. Consequences for Parra have been severe: the BIAL Foundation cancelled a grant to Parra, the Parapsychological Association, of which he had been president and board member, expelled him, his employer the Universidad Abierta Interamericana fired him from all positions, and the publication of at least some of his future books was cancelled.18

Nahm has published two German-language books and numerous articles in German and English about the above topics and others in psychical research. A complete list of his works may be found on his website here.

With Weibel, A. (2020). The significance of autoscopies as a time marker for the occurrence of near-death experiences. Journal of Near-Death Studies 38, 26-50.

The Tibetan Book of the Dead: Its history and controversial aspects of its contents (2011). Journal of Near-Death Studies 29, 373-98.

Terminal lucidity in people with mental illness and other mental disability: An overview and implications for possible explanatory models (2009). Journal of Near-Death Studies 28, 87-106.

With Hassler, D. (2011). Thoughts about thought bundles: A commentary on Jürgen Keil’s paper ‘Questions of the reincarnation type’. Journal of Scientific Exploration 25, 305-18.

With Rousseau, D., & Greyson, B. (2017). Discrepancy between cerebral structures and cognitive functioning: A review. Journal of Nervous and Mental Disease 205, 967-72.

Mysterious ways: The riddle of the homing ability in dogs and other vertebrates (2015). Journal of the Society for Psychical Research 79, 140-55.

With Navarini, A.A. & Kelly, E.W. (2013). Canities subita: A reappraisal of evidence based on 196 case reports published in the medical literature. International Journal of Trichology 5, 63-68.

Godfrey, A. (2021). ‘The clouds cleared’: What terminal lucidity teaches us about life, death and dementia. The Guardian, 23 February.

Tsakiris, A. (2015). Alzheimer patient rises from deathbed, regains memory to recite poem, then passes away. Posted on Skeptiko: Science and Spirituality, 9 June. [Podcast, with transcripts of excerpts.]

Nahm, M. (2014). The development and the phenomena of a circle for physical mediumship. Journal of Scientific Exploration 28, 229-283.

Nahm, M. (2015). Mysterious ways: The riddle of the homing ability in dogs and other vertebrates. Journal of the Society of Psychical Research 79, 144-155.