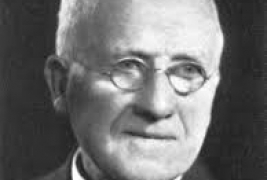 Herbert Henry Charles Thurston (1856-1939) was an English Jesuit Roman Catholic priest, scholar and active member in the Society for Psychical Research. He held a more positive view of psi than did other Roman Catholics in his lifetime, although he was sharply critical of Spiritualism.

Herbert Thurston was born in London on November 15, 1856. He was given a Jesuit education and received his BA from the University of London. He was ordained as a priest in the Society of Jesus in 1890. He wrote extensively on the saints, also about psychical research, and although some Catholics criticized him for being too sympathetic he was mainly known as a skeptic, because of his critical attitude towards the legends surrounding the saints. He wrote more than 800 articles.1 The books listed below relate, directly or indirectly, to psychical research.

Although sharply critical of superstition, especially regarding the saints,2 Thurston accepted the existence of psi and considered it in part a naturalistic phenomenon.3 With regard to survival, he doubted that mediums provide access to the dead in the afterlife, although he considered this possible. He criticized Spiritualism for its confidence that the entities with whom mediums communicate are only the dead: some ‘communications’ may originate in the medium’s subconscious, he felt, while many alleged communications appear to be self-contradictory.4 Thurston further warned that mediums may be communicating with demonic entities or other malevolent beings. He was also open to the possibility that communicators may be beings from another dimension. Thurston accepted poltergeist phenomena as genuine; however, he rejected the widely held modern view that the poltergeist agent, often a person entering puberty, is the sole cause of the phenomena. Rather, Thurston considered the agent to be a de facto medium and the poltergeist to be ‘a proof of the existence of a world of spiritual agencies, not cognoscible directly by our sense perception’.5

Thurston, H.G.C. (1933a). The church and spiritualism. (Milwaukee: The Bruce Publishing Company).

Thurston, H.G.C. (1933b). Superstition: a backward glance over nineteen centuries.(London: The Centenery Press).