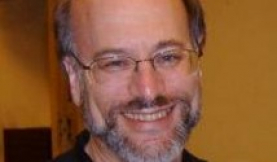 Loyd Auerbach is an American parapsychologist, mentalist and author, whose books aim to educate the public about the paranormal.  His research activity is mainly investigations of hauntings, reincarnation and other field phenomena.

Loyd Auerbach was born in 1956. His father Richard (Dick) Auerbach was an executive producer at NBC Sports and VideoSpec International.

Growing up outside of New York City, Auerbach graduated from Northwestern University in 1978 with a degree in cultural anthropology.  He holds a Master’s degree in parapsychology from John F. Kennedy University, now part of National University, where he continues to teach as an adjunct professor in media and publishing.

In 2010, he was appointed to the faculty of Atlantic University, teaching an online parapsychology graduate course. Since 2014 he has taught online parapsychology courses at the Rhine Research Center, and was appointed to its board of directors in 2012. He has served as president of the Forever Family Foundation since 2013 and is on the advisory board of the Windbridge Research Center.

In the 1980s, he briefly acted as public relations consultant to the American Society for Psychical Research. He wrote a column for Fate Magazine from 1991 to 2004.

Auerbach’s interest in magic and mentalism was encouraged by Charles Honorton and Marcello Truzzi in the early 1980s, leading him to perform professionally under the stage name Professor Paranormal. He joined the Psychic Entertainers Association in 1997 and became its president in 2001, holding the post until 2005.

Auerbach’s nine books about the paranormal include Psychic Dreaming (1991), Mind Over Matter (1996), The Ghost Detectives’ Guide to Haunted San Francisco (2011), and ESP, Hauntings and Poltergeists (1986/2016). He co-authored ESP Wars: East & West (2018). A book chapter1 co-written with Dominic Parker and Sheila Smith provides a comprehensive overview of parapsychology in the United States.

Auerbach has appeared on the Netflix series Surviving Death. His numerous other media appearances have included The New Thinking Allowed (YouTube), The UnXplained, ESPN’s SportsCenter, ABC’s The View, Oprah, Larry King Live, and Coast to Coast AM. He has occasionally worked as a consultant for television programs and motion pictures.

ESP Wars: East and West, co-authored with Edwin May, Victor Rubel and Joseph McMoneagle, describes the US government-sanctioned psychic spying program Stargate, which was aimed at countering Russian efforts to weaponize psi. The book details the successes, failures and politics involved in the classified programs of the both countries.2

In Hauntings and Poltergeists: A Ghost Hunter’s Guide, Auerbach writes from the perspective of both investigator and experiencer.3 He discusses parapsychological theories behind ghostly phenomena and their connection to other forms of psi. The book explains the nature of poltergeist and haunting experiences by referencing findings from modern-day parapsychological lab research.