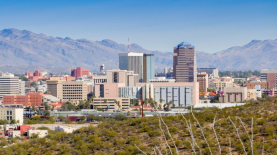 The Windbridge Research Center is a non-profit research organization based in Tucson, Arizona, dedicated to the rigorous scientific study of mental mediums (people who claim regular communication with the deceased).

The Windbridge Research Center is a non-profit US public charity co-founded in 2017 by husband-and-wife research team Mark Boccuzzi and Julie Beischel. In the same year, the Center took over the peer-reviewed research relating to life after death that had been conducted at the Windbridge Institute, LLC (also founded by them) since 2008. Boccuzzi volunteers as executive director and Beischel serves as director of research.

The Center’s main focus is rigorous scientific study of mental mediums, people who report experiencing regular communication with the deceased.1 It also provides free educational materials focused on dying, death, and what comes next,2 with the aim of easing suffering.

The Center serves four different, but potentially overlapping, populations: the general public; clinicians, including medical and mental health professionals; scientists, such as researchers and philosophers; and practitioners, such as mediums. It receives input from scientific, clinical, and community advisory boards.3

Specifically, its research interests are:

Currently, Windbridge Research Center studies focus on mediums and those to whom they give readings (sitters). It works with a team of Windbridge Certified Research Mediums (WCRMs), each of whom was screened over several months using an intensive eight-step, peer-reviewed screening and training procedure.4  Each WCRM agrees to donate a minimum of four hours per month to assist in various aspects of the research and to embrace a strong commitment to the values of scientific mediumship research.5 (Funding for the WCRM program has ended, and the Center is no longer screening or admitting new mediums.)

Some key findings are as follows:

In a study reported in 2015, twenty Windbridge-certified mediums participated in over a total of 86 readings with quintuple blinding (five levels). The highly-controlled study eliminated conventional explanations, including cold reading, rater bias, experimenter cueing and fraud. All analyses of the data retrieved statistically significant results with p-values ranging from 0.05 to 0.0001, a highly significant result. This work successfully replicated and extended previous findings and further demonstrated anomalous information reception.7

Beischel, together with colleagues at the Institute of Noetic Sciences (IONS), used EEG to monitor the brain activity of mediums trained at the Windbridge Institute. Each of six mediums engaged in four mental tasks: thinking about a living person known to them; fabricating a person and thinking about them; listening to information spoken by an experimenter; and mentally interacting with a deceased person they knew. Findings suggested that mental states associated with communication with the deceased were distinctly different from normal waking states.8

In a study reported in 2009, six certified research mediums were asked to describe, in as much detail as possible, their subjective experiences while engaged in both discarnate communication and psychic readings. The discarnate experiences centred around partial merging with the discarnate; auditory, visual, tactile, and olfactory information germane to the deceased individual; signs that contact was made; apparent independence of the medium from the discarnate; and the experience of multiple sensory modalities occurring simultaneously. Psychic readings produced reports of experiences of visual, auditory and tactile information pertinent to the client, as well as empathy and precognition. A comparison of the discarnate and psychic readings revealed clear-cut differences.9 A more recent, much larger qualitative-quantitative study builds on this research.10

In a paper11 and anthology chapter,12 Beischel and colleagues discuss the limitations of conventional grief counselling that emphasizes the separation of the living and deceased, with concomitant acceptance of the loved one’s death – which they say are largely devoid of proven benefits. They propose an alternative approach that treats the bonds between the living and deceased as real and a resource that can be channelled to the living (in both a literal and metaphorical sense).  The authors note that both spontaneous and induced experiences of after-death communication have been shown to be beneficial in the resolution of grief by demonstrating these continued bonds. These resources are aimed at improving understanding among grief counsellors and their clients regarding after-death communication and the idea of continuing bonds with the deceased.

A more recent paper discusses the research regarding the effects on grief of all four types of ADCs: spontaneous, facilitated, assisted, and requested.13 A large demand for alternative approaches to standardized grief counselling is the driving force behind a clinical study into the therapeutic potential of mediumship, for which Beischel is seeking funding.

An overview of mediumship research is provided here.

Information about other research can be found here.

See also the Psi Encyclopedia entry by Beischel on the history of mental mediumship research.

A mission of the Windbridge Research Center is to make research- and education-based materials freely available. These include fact sheets, short videos based on research findings, and Threshold: Journal of Interdisciplinary Consciousness Studies, a free, peer-reviewed, online-only, open access journal.

The Center maintains a list of peer-reviewed articles written or co-authored by its investigators.14

As well as maintaining an active social media presence, the Center presents at meetings, workshops and academic conferences, and provides a free monthly email newsletter. Its researchers regularly participate in media interviews.