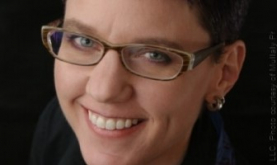 Julie Beischel is director of research and co-founder of the Windbridge Research Center, a 501(c)(3) public charity based in Arizona, which researches survival of consciousness and the therapeutic benefits of consulting mediums.

Julie Beischel was awarded a PhD in pharmacology and toxicology in 2003. She became interested in the question of survival of consciousness following a traumatic life event.1 She served in the University of Arizona’s psychology department as the William James Post-Doctoral Fellow in Mediumship and Survival Research in the Laboratory for Advances in Consciousness and Health. In 2008, she opened her own centre with the formation of the Windbridge Institute, which led to the founding of the (separate) Windbridge Research Center in July 2017.2

During her research Beischel certified a team of mediums, using a rigorous eight-step procedure that included screening, testing and training steps. The mediums moved with her to Windbridge, where she continued this work funded by a 2008 grant from the Bial Foundation. There are now about twenty Windbridge Certified Research Mediums, who are encouraged to donate at least four hours a month to assist the research program. The certification program is now closed and no further mediums are being certified.

Beischel’s first work iin parapsychology was testing the veridicality of mediumistic communications at the University of Arizona. In a tightly controlled triple-blinded experiment, eight students who had experienced the bereavement of either a parent or close friend were invited to rate blindly pairs of mediumistic transcripts – one from the purported deceased individual, the other from a matched control. Overall scoring was significantly in favour of some sort of anomalous information reception (AIR) – a neutral term used at Windbridge that acknowledges the source-of-psi problem: the inherent difficulty in ascribing discarnate or living psi influence to the data. The probability value was 0.007, although super-psi (high level psychic ability) masquerading as discarnate communications could not be ruled out.3

Following up the exploration of mediumship experiences, a comparison was made between psychic and discarnate readings.  In this study, six certified research mediums were asked to describe, with as much detail as possible, their subjective experiences while engaged in both discarnate communication and psychic readings. The discarnate experiences centred around partial merging with the discarnate; auditory, visual, tactile, and olfactory information germane to the deceased individual; signs that contact was made; apparent independence of the medium from the discarnate; and the experience of multiple sensory modalities occurring simultaneously. Psychic readings produced reports of experiences of visual, auditory and tactile information pertinent to the client, as well as empathy and precognition. A comparison of the discarnate and psychic readings revealed clear-cut differences.7 A more recent, much larger qualitative-quantitative study builds on this research.8

Modern mediumship research is becoming more holistic in nature with an emphasis on exploring the entire spectrum from phenomenology, reading accuracy, therapeutic potential and lastly psychophysiological correlations with mediumship performance. To explore this final aspect, data were collected from five Windbridge Certified Research Mediums. Against expectation, there were no significant hematological or psychophysiological changes between pre- and post- readings, but various additional analyses pointed to poor physical health outcomes for mediums, revealing highly significant differences in health status between mediums and controls.9

In a paper10 and anthology chapter,11 Beischel and colleagues discuss the limitations of conventional grief counselling that emphasises the separation of the living and deceased, with concomitant acceptance of the loved one’s death –which they say are largely devoid of proven benefits. They propose an alternative approach that treats the bonds between the living and deceased as real and a resource that can be channelled to the living (in both a literal and metaphorical sense).  The authors note that both spontaneous and induced experiences of after-death communication (ADC) have been shown to be beneficial in the resolution of grief by demonstrating these continued bonds. These resources are aimed at improving understanding among grief counsellors and their clients regarding after-death communication and the idea of continuing bonds with the deceased.

A more recent paper discusses the research regarding the effects on grief of all four types of ADCs: spontaneous, facilitated, assisted, and requested.12 A large demand for alternative approaches to standardized grief counselling is the driving force behind a clinical study into the therapeutic potential of mediumship, for which Beischel is seeking funding.

Rock, A., Beischel, J. (2008). Quantitative analysis of research mediums' conscious experiences during a discarnate reading versus a control task: A pilot study. Australian Journal of Parapsychology 8, 1445-2308.