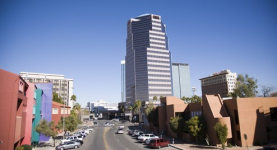 The Windbridge Institute, based in Tucson, Arizona, was founded in 2008 to conduct research on psi functioning, with an emphasis on real-world applications.

The Windbridge Institute, LLC, is an American research company founded in 2008 by husband-and-wife research team Mark Boccuzzi and Julie Beischel. The Institute has been dedicated to conducting applied research on phenomena currently unexplained within traditional scientific paradigms.

In 2017, the mediumship and related research moved to the newly created Windbridge Research Center, a non-profit organization whose mission is to ease suffering around dying, death, and what comes next.

Today, the activities of the Windbridge Institute include developing research, tools, and technologies that help normalize, optimize, and utilize psi functioning through the study and application of mindfulness, synchronicity, intuition, creativity and intention.

Beischel’s post-doctoral fellowship based on the study of mediums ended in 2017. She believed that there were still many important questions that needed to be explored, but failed to find a position at an existing organization – a result of the controversial nature of mediumship and lack of funding. Accordingly, Beischel and Boccuzzi planned a new research institute for applied research in human potential that would have a dual purpose: a platform for Beischel’s continued mediumship research and a home for Boccuzzi’s work in applied parapsychology.

In 2008, the Institute was launched with Beischel as director of research and Boccuzzi as director of operations. Boccuzzi notes, ‘A project as ambitious as the Windbridge Institute wasn’t created in a vacuum, and there were many people who helped get us up and running in those early days and continue to support us today’.1

This program, which moved to the Windbridge Research Center in 2017,2 focused on studying modern American, secular, mental mediums and modern mediumship. Under Beischel’s direction, the program consisted of three arms:

Research findings indicate that certain mediums can make accurate statements about dead people that they could not reasonably know and that the explanation best supported by the data is that at least some mediums are communicating with the dead.

See here for a complete list of current findings.

This program covers a wide range of projects, including:

Crowdsourcing psi  Explores the ability of groups of people under controlled conditions to accurately predict outcomes of future events.

Online psi games and apps  Develops and deploys free online tools to explore the relationship between mindfulness and psi performance. These include Cloud Blue (a simple, breath-focused meditation app), A Dog’s Tale (a slow-paced, meditative, forced-choice precognition activity presented as a retro-style role-playing game), and Simple Psi (a game that asks players to use their intention and mental focus to keep a moving target within the play area for as long as possible).

Intentional datasets  This exploratory project applies machine learning, data visualization, and other techniques to analyze data from random number generators. Data are collected during sessions in which operators place their mental focus on a specific idea or intention. The resulting datasets are used to influence technological and biological systems in ways consistent with those original intentions.

This program, which closed in 2010, attempted to apply noninvasive methods to explore psi in non-human animals. The program concluded that, given the current inability to identify the source of psi effects, ‘future psi research on non-human participants should be carefully considered and those in which the participants are deliberately stressed should be avoided entirely’.5

By 2016, the number and scope of the institute’s research projects had expanded to the point where the organization was having difficulty providing relevant information and services to its growing and diverse audiences. In response, Boccuzzi and Beischel founded the Windbridge Research Center, a public charity that conducts research and provides free educational materials, to be the new home of he afterlife and mediumship research program.6

After 2017, the Institute rebranded and updated its focus. Today, many of the studies in the basic and applied parapsychology research program continue. Main areas of research and development include mindfulness, synchronicity, intuition, creativity, and intention. The Institute’s goals are to:

The Institute maintains an active social media presence, presents at scientific conferences, provides a free monthly email newsletter, and produces an annual ‘Best of’ list highlighting the year’s significant contributions by other researchers and organizations in the field. The list acknowledges books, published research, films, and open-access resources related to the Institute’s mission.8

In 2019, the Institute launched the Psi Hacking Project, a ‘local and online community effort to connect makers, artists, tech hackers, citizen scientists, seekers, entrepreneurs, and the general public to the ever-expanding body of parapsychological research to encourage the development of new tools, technologies, and experiences’.9