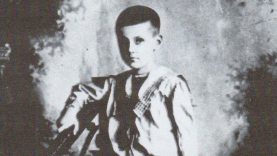 Miguel Alberto Mantilla was a Mexican who at age six exhibited a remarkable ability to calculate calendar dates and days at high speed, rarely making mistakes. His gift was studied for two years by researchers in North America and Europe. The case can be classified among those of William James Sidis, Jacques Inaudi, Vito Mangiamele and other famous super-fast arithmetical calculators of the past two centuries.

Miguel Alberto Mantilla Molina was born in San Juan Bautista, former capital of the state of Tabasco, Mexico, on 30 January 1904. His father Victor Manuel Mantilla, a Spanish-born bank manager, discovered Miguel’s ‘time mania’ early in 1910.  He, along with his wife and family acquaintances, repeatedly asked the child questions such as ‘On what date will the first Sunday of April be in 1918?’, or ‘In what year will Saturday May 25 be?’, and the answers were invariably found to be accurate, although not always immediately forthcoming.1

In March 1910, newspapers in Tabasco and Mexico City began to report this case of ‘chronomancy’, including sworn affidavits by Mantilla and witnesses – lawyers, scientists, and prominent men of San Juan Bautista – concerning Miguel’s feats.2

Mantilla said that he had received expressions of interest from Charles Richet, a French psychical investigator, but apparently this was not followed up. Mexican spiritualist researchers offered some analyses and conclusions.  Keen that more substantial research be carried out, Mantilla contacted James Hyslop,3 director and treasurer of the American Society for Psychical Research, supplying the following details.

Miguel was born with a [club foot], which was causing an enlargement of his right leg. He attended a school since the age of four, but the teachers had special instructions not to teach him anything, since his parents were concerned only with his physical development and not his intellectual training. He was capable of reading moderately and writing imperfectly.4

On one occasion, Mantilla said, Miguel declared how he ‘saw the months passing in a black ball which flitted about’, but afterwards said there was no such a ball. Miguel also said ‘he was too young to be able to explain’ if he made any calculations at all, later saying simply, ‘Do not ask me how I do it, because I do not know’.5

Mantilla declared that he purposely kept the boy from learning arithmetic so that his feats could not be explained in terms of ordinary calculation. Following the thought of FWH Myers, he believed that Miguel achieved them by accessing his ‘subliminal consciousness’ (see below). He further explained that Miguel’s answers were especially quick and accurate with regard to dates more than a hundred in the past or the future.6

Questioning other witnesses, Hyslop found no evidence that the process involved telepathy or clairvoyance. He thought the phenomena might be of a mediumistic type, at least ‘when associated with other phenomena suggesting unusual capacities’.7 However, an attempt at automatic writing on his first meeting with Miguel in May 1911 provided no evidence for this.8

Experiments with ‘chronomancy’ yielded highly significant results. In a first set, Hyslop named the year and the date of the month, and Miguel was to tell the day of the week on which the date fell, for example:

In the second set, the day of the week and the date in the month were given for Miguel to identify the corresponding year, for example:

A problem emerged with regard to the boy’s answers for dates that preceded the 1582 adoption of the Gregorian calendar. Thse at first sight appeared to be erroneous, but turned out to be correct following some complex arithmetical adjustments by Hyslop.9If the boy did not answer instantly it took him no more than a quarter of a minute. Reference to a two-century calendar confirmed the accuracy of all the answers, including one that Hyslop first believed to be wrong.10

Hyslop did not attempt to discover the process involved, merely stating that the accuracy of Miguel’s answers was unlikely to be a matter of chance.11 Having no reason to suspect any fraud or collusion between father and son, he thought that the evidence pointed to some ‘unusual’ source of information (although traces of any psychic power were ‘few and obscure’) and concluded that something ‘supernormal’ was involved that could, however, not be assigned a recognizable character.12

As far as is known, Miguel Mantilla’s gift was never again put to scientific tests, and it is not known how long it lasted. In adulthood, he was a successful civil engineer in Mexico.

Hyslop’s report was cited by psychical researchers and writers on mathematical methods.13 It was republished in a number of French publications.14

In 1912, H Addington Bruce referred to the case in an article about ‘lightning calculators’, where he argued that the ‘mental processes’ of such people depend on an ‘unusual facility of access to resources’ shared by everyone, and the profound study of their biographies would show that they manifest genius ‘in a low degree’.15

Other Theories and Speculations

FWH Myers, a co-founder of the British Society for Psychical Research, discussed the phenomenon of ‘calculating boys’ in his 1903  book Human Personality and its Survival of Bodily Death, linking it to other apparently involuntary ‘subliminal’ phenomena, such as hallucinations. He noted that it appears to operate without conscious effort, the answer simply appearing with no clue as to its origin. Myers’s ideas have recently been referenced by the authors of Irreducible Mind, which supports a ‘filter’ or ‘transmission’ view of consciousness that does not depend on the brain.16

Contemporary scientific specialists, including psychologists, neurologists and child educators concur that the phenomenon of child savantism, particularly of the autistic spectrum,17 has no paranormal origin.18

Some parapsychologists, by contrast, have considered such cases as possible evidence of reincarnation and past life memories.19

Hermelin, B. (2001). Bright splinters of the mind: A personal story of research with autistic savants, foreword by Sir Michael Rutter. London and Philadelphia: Jessica Kingsley Publishers.

Hyslop, J. (1912). Some instances of psychic phenomena in children. Journal of the American Society for Psychical Research 6/2, February, 83-106.