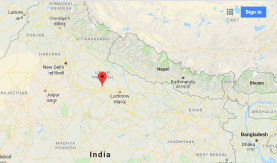 In this Indian reincarnation case, twin boys recalled the lives of two men, also twins, who were savagely murdered. The boys not only retained memories of their previous lives but were born with birthmarks that reflected the nature of their brutal deaths.

Ram Narain Diwedi, nicknamed Ramoo, and his twin brother Shesh Narain Diwedi, nicknamed Rajoo, were born in August 1964 to an Ayurvedic physician and his wife in Sham Nagara, a village in the northern Indian province of Uttar Pradesh. Before and during her pregnancy, their mother had dreams featuring two children, dreams which later were thought to have presaged the birth of the twins.

Aged three, the twins ran off toward a highway and had to be retrieved. When asked why they had done this, they said they were going home. Later that year they touched the feet of a man passing through their village, a customary sign of respect in India, but not with strangers. Scolded by their uncle, they said they recognized the man as a resident of the village Uncha Larpur, where they said they had lived before. They then stated that in their previous lives, Ramoo had been named ‘Bhimsen’ and Rajoo had been named ‘Bhism Pitamah’.

The twin boys went on to give an account of having both been murdered by a man named Jagannath with whom they had quarrelled. Pretending reconciliation, Jagannath invited the previous persons to his house in another village, Kurri, and deceptively treated them in a friendly and hospitable way. They were then attacked by numerous men, overpowered and killed.

When word of the twin boys’ apparent memories reached Uncha Larpur, in about 1971, relatives of the murdered twins, Bhimsen and Bhism Pitamah Tripathi, and other villagers including the alleged murderers themselves, came to Sham Nagara to visit them. Ramoo and Rajoo recognized most of these people.

Reincarnation research pioneer Ian Stevenson heard about the case in late 1971 while making inquiries about other cases at a police station in a nearby town, which had records of the double murder on file. His assistant LP Mehrotra visited both Sham Nagara and Uncha Larpur in July 1972, taking down statements from principal informants. Stevenson himself visited in March 1973 to examine the court records and interview Ramoo, Rajoo, their parents, their paternal uncle, the murdered twins’ older brother and mother, plus others associated with both sets of twins.

Later, Mehrotra and reincarnation researcher Erlendur Haraldsson interviewed Ramoo and Rajoo’s teacher, and performed psychological tests on Ramoo, the firstborn twin, and a peer matched for age, sex and social status, though the study was never published due to circumstances beyond the researchers’ control.1 Mehrotra corresponded further with the murdered twins’ older brother to clarify some details. Finally, Stevenson interviewed a man who had been their friend as well as Ramoo and Rajoo themselves, now aged nine, in October 1974. He published the case in his 1975 book Cases of the Reincarnation Type. Volume I: Ten Cases in India.2

In October 1974, the Indian reincarnation researcher Satwant Pasricha performed further interviews. Pasricha and Nicholas McClean-Rice researched the twins’ development in 1983, when they were nineteen. By blood-testing they determined the twins were dizygotic.

Stevenson’s investigation was somewhat hampered by Ramoo and Rajoo’s father’s attempt to suppress their memories by physical beatings. When that did not work, they were adjured not to share information with people outside the family. An exception was allowed in the case of Stevenson and Mehrotra in aid of the investigation, but the boys may have been less forthcoming than they would otherwise have been.

Bhimsen and Bhism Pitamah Tripathi were born in 1935 to a farming family. They were of the Brahmin caste, as also were Ramoo and Rajoo. On their father’s death, his land was divided equally between the twins and their brother. Bhimsen, who had gone to school and was literate, also worked part-time as an assistant secretary in Uncha Larpur. The twins were inseparable, at least until they married about a year apart. Bhimsen and his wife had three children; Bhism Pitamah and his wife had one.

The twins were reputed to be good-natured and loving, also strong and brave, the kind ‘who did not make trouble nor run from it’, in Stevenson’s words. At the murder trial it was claimed that they were police informers, which Stevenson noted was likely to have made them some enemies. A more probable cause of the murder, however, was a dispute over a land boundary between them and two men, Jagannath and Raja Ram of the village of Kurri, a quarrel which led to the destruction of some of these men’s property by the twins. It was about a month later when Jagannath and Raja Ram invited the twins to Jagannath’s house, feigning reconciliation.

Bhimsen and Bhism Pitamah were last seen alive on 28 April 1964. Their rope-bound bodies were found in a well on 2 May, and police found signs of strangulation. Due to decomposition, the pathologist who performed the post-mortem did not give a cause of death. The police arrested nine of the twins’ known enemies, but as all eyewitnesses had likely been participants, the prosecution could not gain sufficient evidence against, and they were all acquitted.

However, the murderers boasted to others about what they had done, and word got back to the victims’ family. The account that Stevenson gives, drawn from this information, is that first a blinding liquid, acidic or otherwise corrosive, was thrown into the victims’ eyes as the assailants tried to overpower them. One twin managed to break free and get out of the house, but realized his brother was still captive, and either waited or went back in and was recaptured. The twins were pinned to the floor with poles crossing their torsos and legs, then strangled with a post from a cot that was pressed against their throats. The bodies were first thrown into a watercourse, then retrieved and dumped in the well for better concealment.

Observers reported that Ramoo related more past-life memories than Rajoo did, an imbalance which Stevenson notes is typical of twin cases he has studied.3 However, he tabulated both twins’ statements and recognitions in one table.4 They made the following accurate or mostly-accurate statements, verified either by Bhimsen and Bhism Pitamah’s family members (albeit sometimes second-hand) or police records:

Among visitors from Uncha Larpur, Ramoo and Rajoo recognized Shiv Narain, the man whose feet they had touched, their former brother, their former mother, two former sisters, two of Bhimsen’s sons, Bhism Pitamah’s son, and a friend. At one point, some of the alleged murderers visited and were recognized by Ramoo and Rajoo, but Stevenson was unable to learn details of the encounter. He speculated that, in spite of the twins’ memories not being admissible in court as evidence, an ‘eerie blend of anxiety and curiosity’ might have prompted the murderers to visit the young incarnations of their victims.5 While the father of Ramoo and Rajoo claimed that he did not fear reprisals from the murderers, his brother told Stevenson that both parents actually did have this concern.

Both twins had birthmarks unlike any Stevenson had seen in some two hundred such cases he had studied by this time. Streaks of increased pigmentation, about two millimetres wide, ran horizontally and across their torsos and abdomens, spaced irregularly. According to their mother and paternal uncle, these marks were present from birth. It was never determined precisely what marks had been left by the killing of the Tripathi twins, owing to the bodies having decomposed.

Stevenson’s initial view was that the birthmarks corresponded either to the poles the murderers had used to pin down the twins or the ropes used to bind the bodies; after further review he decided it was the former.6

The twins displayed a desire to return to Uncha Larpur from an early age. They tended to talk about their past lives when visitors from their former home village were present. They displayed some of the combativeness for which the previous persons were known; at one point they rushed at and threatened a person who taunted them for a defeat in a past-life quarrel, and in another incident Ramoo had to be stopped from throwing a brick at someone from Uncha Larpur who had said something he felt was insulting.

While the twins were with their former children, they behaved paternally toward them, calling their former sons ‘son’. They showed concern about their previous house falling into disrepair, and wept upon meeting their former mother, as did she. They were very close and liked to do everything together, as Bhimsen and Bhism Pitamah had.

Stevenson noted that the villages of Sham Nagara and Uncha Larpur were about sixteen kilometers apart. However, at this time there was little communication between them: Sham Nagara had barely a hundred residents, too small to attract visitors from elsewhere. Members of the two families might have crossed paths in a nearby town to which villagers would travel to shop. However, Stevenson saw no evidence of the frequent contacts that would be needed for the twins to acquire so much detailed information by normal means.

Stevenson became satisfied that the two families had had no prior acquaintance, and that no one else could have passed information to Ramoo and Rajoo without their family knowing it. Stevenson assumed that news of the murder in the one village would have reached the other before the twins began mentioning it; while the twins’ uncle said this was not the case, their mother said she had heard of it, but had not connected it with her twin sons until they began talking about it.

Stevenson noted that the Sharma family showed no sign of wanting publicity for the case, but rather tried to suppress it, anxious about reprisals from the murderers, ruling out attention-seeking or profit as motivations for fraud.

Ramoo and Rajoo were only eleven years old when Stevenson published his study, so there is little information about their adult lives.

In 1972, at the age of eight, they still remembered some details of their previous lives, such as the name of their former home village and their own former names, but had forgotten or confused other details. Describing the murder, Ramoo now incorrectly stated that they had been stabbed, which no one involved had ever claimed and records do not show.

In March of 1973 Ramoo and Rajoo were attending school, somewhat behind their age group. Their father said confidently that they had stopped mentioning their previous lives. Their paternal uncle, who was less dismissive of the boys’ memories, said they were still talking about them to each other.

Haraldsson, E. (2003), Children who speak of past-life experiences: Is there a psychological explanation? Psychology and Psychotherapy: Theory, Research and Practice 76, 55-67. .

Stevenson, I. (1975). Cases of the Reincarnation Type. Volume I: Ten Cases in India. Charlottesville: University Press of Virginia.

Stevenson, I. (1997). Reincarnation and Biology: A Contribution to the Etiology of Birthmarks and Birth Defects. Volume 1: Birthmarks. Westport, Connecticut, USA: Praeger.