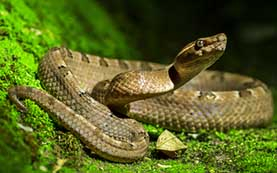 Spontaneous ‘past life’ memories in children are often accompanied by phobias that correspond with remembered traumas, especially those that resulted in death.  This article summarizes research findings that provide evidence of such a link.

In a 1990 study, pioneering reincarnation researcher Ian Stevenson defines phobias as ‘irrational fears the magnitude of which far exceeds the strength of the observable stimulus’. Childhood phobias are extremely common in the general population, he states, citing three surveys showing incidences of 90% between the ages of two and fourteen years, 58% between six and twelve and 22% between two and seven, respectively.1

In an earlier work, Stevenson writes that while many of these fears can be traced to a frightening event experienced by the child, suggestions by a parent, or imitation of another person manifesting the phobia, for many, ‘none of these common explanations apply because an appropriately formative event or influence from surrounding persons cannot be discovered’.2 This tendency was noticed as long ago as in the 1890s, Stevenson notes, citing nineteenth-century psychologist G Stanley Hall, who suggested a remote origin for such inexplicable fears and referred to Plato’s notion of metempsychosis (reincarnation), without actually offering it as explanation.

In his own research, Stevenson quickly found that children who remembered past lives often showed phobias that corresponded to traumas that emerged in their statements about their past lives, especially death. Other researchers also found the same when analysing the behavioural aspects of investigated child cases.

Stevenson and colleagues found that of 387 subjects who recalled a previous life, 141 (36%) had suffered at least one related phobia. Cultural variations were found; among solved cases (cases in which the child’s previous incarnation has been identified with reasonable certainty), the lowest incidence was found in Indian cases (16%) and the highest in the Druze sect in Lebanon (51%).3

Phobias among children who remembered past lives, Stevenson found, ‘almost always’ correspond with the way in which their previous life ended, and mostly relate to violent deaths, occurring much more rarely after natural deaths.4 However, there are exceptions, as in the case of Parmod Sharma, whose previous incarnation had died of gastroenteritis after gorging on contaminated yogurt, and who himself was averse to yogurt.5

Stevenson found that, among 47 subjects who seemingly drowned in a previous incarnation, thirty (64%) exhibited a phobia of water. A 1993 study showed that in fifty clinical cases of childhood phobia of water in the general population, in 28 (56%) the parents knew of no traumatic experience or influence that could explain it; the fear arose at the moment of the child’s first contact with water.6 Such cases might be explained by past-life drownings, Stevenson suggested.

Similarly, among thirty individuals who had seemingly died of a snake bite in the previous incarnation, thirteen (43%) exhibited a phobia of snakes.7 In addition, ten (40%) had birthmarks that were related either to the wound or to attempts to treat it.8

U Po Thwai of Myanmar recalled having been a snake-charmer in his previous life, which ended when a snake bit him; unable to get emergency aid, he died the next day. He started his new life with a love for snakes; as a young child he would catch small snakes and play snake-charmer with them. However, between the ages of sixteen and eighteen, he experienced hallucinations of snakes and his fascination changed to terror. This phobia lasted at least until middle age.9

Examples of Generalization or Transfer

As a young girl, Daw Aye Myint of Myanmar had a fear of all men of around 25, the age of the man who murdered her in her previous incarnation.10

Maung Nyunt, also of Myanmar, died when he fell from a pony-cart he had been driving in his previous life. In his current life, he exhibited a fear of driving pony-carts, and of heights generally.11

Ngozi Uduji, a Nigerian Igbo, was identified through a birth defect as the reincarnation of a cousin of her father who had been killed by bombing in the Biafran War. She feared aeroplanes, the sight and sound of guns and white men, possibly remembering white men who served as mercenary aeroplane pilots for the Nigerian Army.12

Ma Myint Thein of Myanmar was born with fingers missing and deformed. In early childhood she stated that she had been murdered by men with swords and indicated the spot where it had happened.13

Necati Çaylak of Turkey recalled the life of a man who had died in a car accident on a bridge. As a young child he cried upon first seeing the bridge and appeared afraid to cross over it. The fear lasted until he was around ten years old.14

In some cases, Stevenson notes, phobias manifest before the child speaks of the past life or is even able to speak at all. As an infant, Shamlinie Prema of Sri Lanka manifested an extreme dislike of being bathed, struggling so hard that it took three people to hold her. She also showed a fear of buses. When she could talk she began speaking of a past life, eventually identified as that of a girl who had drowned at the age of eleven after jumping out of the way of a bus into a rice paddy.15

Sujith Lakmal Jayaratne of Sri Lanka showed a fear of lorries (trucks) at eight months of age; the English loan-word ‘lorry’ was among the first words he uttered. When able to talk in sentences, he described having died after being run over by a lorry when he drunkenly stepped into the road. His many other statements relating to a past life identified it as that of an individual who had died in this way.16

Phobias in Cases Without Memories

In some researched cases, the origin of a phobia has been attributed to past life memories by the individual’s relatives rather than by the individual. Derek Pitnov, a member of the Alaskan Tlingit, had a diamond-shaped birthmark which, according to local elderwomen, resembled the spear-wound that killed his great-great-grand-uncle Chak-nik-kooh. From childhood, Pitnov exhibited a phobia of bladed weapons: he would not play with knives and intensely disliked bayonet drill.17

A past life was identified in the case of Maung Sein Nyunt of Myanmar through an announcing dream experienced by his mother, a birthmark similar to a blemish on the skin of the previous person, and a phobia: In the previous life he had drowned while swimming in a lake, and in his current life he showed a fear of water until his mid-teens.18

Daw Tin Hla of Myanmar recalled the life of a man who had been brutally murdered with a sword, the first blows slashing off his fingers and the final one striking his neck. As well as being born with missing fingers, the girl was afflicted with multiple related phobias. Her fear of blood was so severe it made her physically ill, to the extent that she found herself unable to aid a friend with an injured hand. She dreaded swords and large knives that could be used as weapons, although she was unafraid of kitchen knives. She felt uneasy if anyone touched her on the neck. In any group she refused to be at the rear, preferring to be in the middle and so protected by other people in case of attack. These phobias persisted well into adulthood.19

Stevenson writes that childhood phobias relating to past deaths tend to be strongest while the children are most frequently speaking of their memories, usually between the ages of two and four years. They tend to fade along with the memories themselves as the child gets older, but can sometimes persist. Stevenson cites the case of a young child who had a marked fear of the person who murdered his previous incarnation. Aged eleven, he still feared the murderer but could not remember why; at thirteen, this was no longer the case, but he remembered that he had feared him earlier.

The researchers checked for conflicts and signs of neglect or abuse which might explain these findings, but found nothing remarkable. Haraldsson notes that past-life related phobias clearly contributed to these scores, as did apparent changes of personality as the children shifted back and forth between reliving the previous and living the current life.22 Experts on post-traumatic stress disorder (PTSD) pointed out that such characteristics are common among people who have suffered identifiable traumas. According to the World Health Organization (WHO), a diagnosis of PTSD requires three criteria:

Further indications are provided by an American study by reincarnation researcher Jim Tucker and FD Nidiffer, in which two of fifteen participating children who remembered a previous life showed significant dissociative behaviour.23 Elsewhere, Tucker writes: ‘In the cases in which the previous person died an unnatural death, over 35% of the children show an intense fear of the mode of death, the kind of avoidant behaviour that is a part of the official DSM [Diagnostic and Statistical Manual of Mental Disorders] criteria for PTSD’.24

In her book Children’s Past Lives, regressionist and child reincarnation researcher Carol Bowman offers advice to parents whose children are troubled by phobias and other painful emotions arising from past lives. She emphasizes that parents should be open-minded, non-judgmental and calm, and recommends gently eliciting the story, especially if it includes death, to learn what might be causing the symptoms. However, parents should not insist if the child becomes reluctant to speak, or probe too hard while the child is emotional.25

Bowman strongly advises allowing the release of emotions rather than discouraging it.26 She also cautions parents not to reject accounts of death as dangerous or morbid or try to suppress them, but rather recommends helping the child stay with the memories and emotions while they are present, as potential healing opportunities.27

Cook, E.W., Pasricha, S., Samararatne, G., Maung, W., & Stevenson, I. (1983). A review and analysis of “unsolved” cases of the reincarnation type: Part II, A comparison of features of solved and unsolved cases. Journal of the American Society for Psychical Research 77, 115-35.

Haraldsson, E. (2003). Children who speak of past-life experiences: Is there a psychological explanation? Psychology and Psychotherapy: Theory Research and Practice 76/1, 55-67.

Stevenson, I. (1997a). Reincarnation and Biology: A Contribution to the Etiology of Birthmarks and Birth Defects (vol. 1.) Westport, Connecticut, USA: Praeger.

Stevenson, I. (1997b). Reincarnation and Biology: A Contribution to the Etiology of Birthmarks and Birth Defects (vol. 2.) Westport, Connecticut, USA: Praeger.