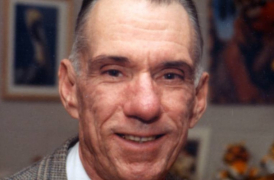 Robert Jahn was a plasma physicist who made notable contributions to the science of rocket propulsion. He was professor of mechanical and aerospace engineering at Princeton, where he also founded and ran the PEAR anomalies research laboratory, specializing in the study of mind-machine interaction.

Robert George Jahn (1930-2017) was the founder and director of Princeton Engineering Anomalies Research (PEAR) at Princeton University. He held the rank of professor in the Department of Mechanical and Aerospace Engineering, and was appointed dean of Princeton's School of Engineering and Applied Science in 1971.

In 1979, serendipitous events motivated him to establish a research program to study human consciousness and its intersections with the physical world. Jahn gathered a multidisciplinary team to pursue rigorous research on psi phenomena including anomalous acquisition of information and anomalous mind-machine interactions. The research progressed from efforts to establish that there was a question deserving a high technology assessment, to a progressively refined search for parameters that could inform efforts to explain small but persistent anomalous effects.

A fundamental focus was on potential models and theoretical explanations derived from the empirical findings. The PEAR lab continued for almost three decades, closing in 2007; it left a deep legacy of strong experiments and thoughtful modeling, and a substantial number of offshoots and follow-on projects around the world.

Robert Jahn was born April 1, 1930 in Kearny, NJ and died November 15, 2017 at his home in Princeton, NJ. He spent much of his childhood in Wilmington, DE. After graduating from the Tower Hill School, he earned a bachelor’s degree in mechanical engineering with highest honors from Princeton University in 1951, followed by a PhD in physics, also from Princeton, in 1955. After teaching at Lehigh University and the California Institute of Technology, Jahn joined the faculty at Princeton in 1962, and founded the Electric Propulsion and Plasma Dynamics Laboratory, a major program that quickly achieved international stature. Now the oldest continuously-funded laboratory at Princeton University, this program still attracts some of the brightest graduate students from around the world. He presided over major research programs in advanced aerospace propulsion systems in cooperation with NASA and the U.S. Air Force.

In 1971, Jahn was appointed dean of Princeton’s School of Engineering and Applied Science. Under his leadership the School substantially expanded its curriculum, faculty, and student body and increased its outreach programs and the number of professional fields its graduates entered. Nearly all of the engineering departments were ranked in the top five nationally. In 1986 he was named dean emeritus, and returned to full-time research and teaching.

Jahn authored or co-authored five books and several hundred publications in various technical fields. His textbook Physics of Electric Propulsion, first published in 1968, is still a primary reference in the field. Margins of Reality, co-authored with Brenda Dunne and published in 1987, summarized and interpreted nearly a decade of intense research, expanding our understanding of subtle aspects of human consciousness.

Jahn’s career touched and influenced the farthest reaches of science, from the physics of electric propulsion for spacecraft to the extended capacities of human consciousness. A partial listing of his accomplishments and honors gives a hint of his breadth of interests. As dean of the School of Engineering at Princeton, Jahn was a highly respected academic leader. He was a fellow of the American Physical Society and of the American Institute of Aeronautics and Astronautics, and an influential member of numerous other technical organizations. He was chairman of of the International Consciousness Research Laboratories consortium and he was a member of the board of directors at Hercules, Inc and chairman of its Technology Committee. He was Chairman of the Board of Trustees of Associated Universities, Inc. This is a small sample of the long list of Jahn’s achievements, but it is safe to say that with all his extraordinary contributions in science and technology, his deepest feelings of accomplishment were for the study of consciousness at the frontiers of our understanding.

The circumstances that led Jahn to create the PEAR laboratory in 1979 illustrate his unusual character and his deep commitment to science in the service of understanding. While welcoming new students he mentioned that an important step would be an independent project on the topic of their choice. Two years later a student in electrical engineering and computer science came to him for help when she discovered that none of her professors would monitor her work attempting to replicate Helmut Schmidt’s psychokinesis experiments. That was a bridge too far for her faculty, but not for Jahn. He encouraged her to study the relevant professional literature and organizations, and helped her design a fully rigorous experiment.

Her results, and the background of literature and conference reports she assembled, persuaded Jahn to build a high tech lab focused on the possibility that consciousness might interact directly with physical systems. Careful experiments might reveal some fundamental error in what looked like good, though sparsely supported research. Alternatively, results from mind-machine experiments might point to aspects of the world that were not yet accommodated in scientific models. Jahn attended professional conferences himself to learn more and to meet people engaged in the work. He found a kindred spirit in Brenda Dunne and persuaded her to help build a laboratory. He turned to friends in the engineering and technology community and the ranks of Princeton alumni to find support for a technically sophisticated laboratory. Major supporters in the early years included James S McDonnell, founder of McDonnell Douglas Aircraft, and philanthropist Laurance Rockefeller, both fellow Princeton alumni.

Jahn felt this area of research was potentially important for the future of high science and technology, and for broader cultural evolution as well. The PEAR lab would be a home for researchers attempting rigorous scientific study of interactions of human consciousness with physical systems and information fields. Jahn’s personal and political acumen generated a strong base of support, both academically and financially, and the lab became the leading academic research facility of its kind, with a large base of student and public interest throughout the world.

Much of his time was spent acquiring financial support and protecting the lab. To Jahn’s regret, he had to give considerable time and energy to defending PEAR from attacks by critics inside and outside the university. He welcomed informed skepticism because it could help strengthen protocols and experimental designs, but he was dismayed by the numerous uninformed criticisms of PEAR’s work by people who never visited the lab or read the scientific reports. He didn’t complain about his role, but he did lament the missed opportunities to ‘get his hands dirty’ running actual experiments.

Over nearly three decades, PEAR was acknowledged as one of the most productive psi research centers in the field. Together with Brenda Dunne, who managed the lab, and a team of scientists from several fields, Jahn broke new ground while also confirming and replicating research from other scientists around the world. The lab became a beacon for people with a professional interest in psi research, and equally for those with a personal interest in subtle aspects of consciousness. Among many visitors were Nobel prize winners, celebrities, mathematicians and musicians. People looking for a solid source of information and an opportunity to directly experience psychic research could stop in to see, and perhaps even participate in, a controlled scientific experiment.

The PEAR lab focused on two empirical domains, one assessing mind-machine interaction (MMI) and one looking at remote viewing, most notably precognitive remote perception (PRP). A third aspect was theory and modeling, which was especially important to Jahn. The mission of the lab was to first identify and confirm a phenomenon that needed attention, then to explore its dimensions and define its parameters. With such a foundation an explanatory structure could be constructed.

Over its tenure, the lab built a number of highly refined physical experiments; while others contributed, the seminal ideas often originated with Jahn. By far the best known is the classic random event generator (REG) whose behavior participants attempted to influence by intention alone, replicating and extending the research stimulated by Helmut Schmidt. The REG (also called RNG) instruments developed through three generations, eventually allowing expansion into the field for ‘natural’ experiments looking at group consciousness by means of miniaturized REG devices and palmtop computers that collected continuous, indexed data in numinous as well as mundane situations.

Jahn’s aesthetic sense ensured that the physical experiments were not only precise, but beautiful. The Pinball Machine, formally known as the Random Mechanical Cascade (RMC), was worthy of a place in a technology museum, and the Linear Pendulum apparatus with its quartz crystal and precisely machined brass components would be at home in a great modern art gallery. He and Brenda agreed that the place where people would be asked to attempt ‘impossible’ tasks should be a comfortable, warm environment. The PEAR program was designed to ensure that the white lab coat and the white turban were equally influential, manifesting an operating assumption that successful mind-machine experiments would have to comprise a mutually respectful combination of the aesthetic and the scientific.

Robert Jahn was a top tier officer at a major Ivy League university and at the same time a world class physicist running a NASA-funded plasma propulsion laboratory. The drives he envisioned are now powering spacecraft exploring the solar system. He was internationally influential in science and engineering, yet he commands our attention here because he was a creative and broad-spectrum thinker who somehow escaped the dogmas of ‘scientific’ education far enough to consider with equanimity the mysteries of mind as a part of the physical world; it was this expansive view that produced the PEAR lab, with its wide-reaching influence on public perceptions of modern psi research. He was a thought leader, a careful scientist who understood the challenges of overcoming biases about research on subtle interactions of consciousness with its environment. He knew that any positive conclusions would have to be defended, and that only impeccable protocols could assuage serious skepticism. But it was equally clear that the implications of these experiments were important for both science and society, and to Jahn personally. When asked what motivated him to create a psi research lab, he said: ‘I have accumulated a substantial pile of blue chips as a high technologist, and I am planning to spend them in research that matters deeply on the human scale.’

In the early 1980s, Jahn was one of the prominent academics who came together to create the Society for Scientific Exploration, and he served as SSE’s vice president for more than three decades. His was a voice on the SSE Council that was listened to with special attention, because he was himself a talented listener, able to summarize what was important for decisions that would affect the course of SSE’s growth and its value to the research community. The SSE remains committed to its original mandate to provide a forum for researchers in areas that have been excluded from canonical societies and journals.

Jahn’s foray into the world of consciousness research provided impetus and background for a number of substantial projects. The Global Consciousness Project, created by PEAR researcher Dr Roger Nelson, extended the group consciousness experiments to global dimensions by means of a network of REG devices placed around the world. A 20-year history of continuous random data from this project shows non-random structure correlated with great events in the world.

The PEAR work also led to a semi-commercial venture by a small company called Psyleron Inc, which manufactured and sold hardware and software based on PEAR designs to people wishing to replicate the Princeton experiments. In a direct extension of the lab programs, Jahn and Dunne created a non-profit called International Consciousness Research Laboratories (ICRL) to carry on the work of PEAR independently, especially in education and publication of relevant and related work.

R. G. Jahn,  B. J. Dunne, (1987) Margins of Reality: The Role of Consciousness in the Physical World, Harcourt Brace Jovanovich.