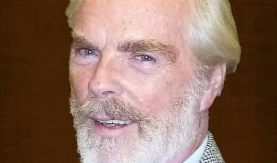 Roger D Nelson is an experimental psychologist and psi researcher. He was research co-ordinator at Princeton’s PEAR laboratory, where he worked for two decades, and is founder and director of the long-running Global Consciousness Project.

Roger Nelson became interested in psi research as a teenager after reading Extrasensory Perception After 60 Years by JB Rhine and JG Pratt.1  He gained a PhD at New York University. In 1980, he moved to Princeton from northern Vermont, where he was professor of psychology at Johnson State College, to join the Princeton Engineering Anomalies Research lab (PEAR).  There he helped develop instruments, methodologies and applications of the mind-matter interaction program.  Running alongside the main PEAR program, Nelson developed the field-REG approach, in which portable random event generators were situated near emotionally-charged public events to investigate collective consciousness effects. Eventually this program led to the development of Nelson’s Global Consciousness Project (GCP), in which he remains involved.

Nelson’s work integrates consciousness research and parapsychology, and looks to quantum physics, information fields, and entanglement to help explain anomalous effects of consciousness documented in rigorous experiments. His public presentations focus on implications of research showing we are all interconnected, and on our potential for conscious evolution.

Nelson is a long-time board member and past president of the Parapsychological Association, and is a council member of the Society for Scientific Exploration, serving as an associate editor of its journal. He is author or co-author of many scientific papers and book chapters on parapsychological research, as well as popular articles and presentations about the GCP.

Much of the research at the PEAR lab focused on psychokinesis, using mechanical devices.

Nelson reported experiments performed with a Random Mechanical Cascade (RMC). This is an oversized Galton board (a common statistical demonstration device), consisting of 9000 polystyrene balls that are dropped through an array of 330 pegs and scatter into 19 collecting bins, producing a typical Gaussian distribution curve. Participants attempt to shift the average of the ball distribution to the right or left for the duration of a fifteen-minute run. Six out of 25 participants achieved statistically significant effects on the ball distributions, when only one person would be expected to do so by chance.  The overall p value across 3300 runs was 10-4– highly significant. The effect came entirely from runs where participants aimed to shift balls to the left; comprehensive control tests ruled out normal explanations for such a strange result. In addition to significant effects of intention, there was also far greater variation in the distribution of left-intended runs relative to baseline (p = 0.003) although not for right intended runs (p = 0.2). Also of note: individuals’ idiosyncratic effects were replicated on other devices such as random number generators.2

Nelson reported over 1500 psychokinesis (PK) runs on a linear pendulum generated by 42 participants, who were asked to either increase (HI aim) or decrease (LOW aim) the amplitude of a swinging glass sphere.  Five individuals achieved a significant difference between the two levels; the difference between intention and baseline runs was also statistically significant for five other participants. The overall PK effect was reduced to non-significance by strong negative performances by several participants. However, analysis of the variance (that takes into consideration both negative and positive scores) revealed significant structure in the database (p = 0.025). More refined analyses indicated superiority for male participants, and that trials in which participants were instructed to aim high or low were more successful than when participants could choose the direction themselves.3

Nelson and colleagues reported a summary of the PEAR program in the first twelve years, with 100 participants and 1000 experimental series employing four different random devices. The magnitude of the effect is extremely small, around one part in 10,000. However, because the amount of data is so vast, this tiny effect represents astronomical odds against chance (p = 3.5 x 10-13). Additionally, the data displayed highly significant disparities between female and male operator performances, where males tended to succeed in their intentions. Consistent serial position effects were seen in individual and collective results, in which the first and second runs gave the largest effect sizes, with declines in subsequent runs, followed by a recovery in the last runs. The effects were not restricted to locally-generated data: experiments that probed distance influence – some in which participants were separated from the RNG by thousands of miles – were just as successful.4

Nelson and Dean Radin reviewed the accumulated mind-matter RNG database, which at that time encompassed 515 experiments by 91 researchers. The overall effect size was miniscule at 1%, but over such a huge database reached huge odds against chance (p = 10*10-35). A conservative estimate of a selective reporting effect, potentially caused by limiting publication to successful studies only, indicated that all 91 researchers would have each had to suppress 29 failed studies to reduce the overall effect to non-significance. Variations in methodological quality were not related to outcomes, although quality was observed to have improved markedly over the years. Nelson and Radin concluded that RNG studies continue to provide persuasive evidence of mind-matter interaction effects under extremely well controlled conditions.5

In the early 1990s, the PEAR team took RNGs outside the laboratory to test the proposition that they might pick up fluctuations in group consciousness. Devices were left operating in an area of collective attention, such as a sports event or concert. Analysis of 61 experiments yielded a composite extremely significant result ( p = 2.2 x 10-6) compared to a p value of  0.91 for events of low collective attention, such as business meetings.6

Further analysis appeared to confirm the presence of deviations from purely random behaviour that correlated with tragedies and celebrations of international significance. For instance composite data gathered on  September 6, 1997, the date of the funeral of Princess Diana, showed deviations that would happen by chance only once in 100 repetitions of such an experiment.7  This led to the creation of the Global Consciousness Project, led by Nelson, with the creation of a permanent network around the world, collecting data continuously.

In a recent study, Nelson analyzed sequences of random data for six years from August 2004, looking at the data structure around New Year’s Eve countdowns.  He predicted that the average trial score would deviate from chance and that the variation across devices would be reduced around midnight. Analysis of the six years combined revealed the mean was indeed marginally shifted (p = 0.053); the variance was even more strongly affected (p = 0.022). Overall, the combined probability for both of these measures is p = 0.001.8

For details of this research see Global Consciousness Project.

Nelson reports on remote viewing experiments conducted by himself and PEAR colleagues in which the targets were to be chosen in the near future. In a typical precognitive remote perception (PRP) trial, the viewer writes down briefly her mentation and completes a 30-item descriptor list that asks a series of binary questions, such as: ‘is your impression mainly light or dark?’; ‘are there animals in your impression or not?’ Shortly afterwards, a participant acting as agent records impressions of the target using the same checklist. Both checklists are matched to arrive at a statistical measure of correspondence. There was a high degree of significance across 334 trials (p = 10* 10-11).9

To test whether healing ‘energy’ could affect both RNG output and injured animals, Nelson arranged for a device to be set up in an energy healer’s practice, with a second device situation in a library as a control. The library RNG performed well within chance. The healing RNG registered significant deviation on 47 out of 51 days (p = 0.0005). Secondary analyses of the healing practice data showed no significant difference between healing and non-healing sessions (p = 0.182, not significant) or in RNG behaviour between the high- and low-attention situations.10 This suggested that simply being present in the healer’s office was sufficient to cause the deviations from chance behaviour, as if ‘residual’ energy from a healing continued to have an influence. Such ‘linger’ effects have been reported elsewhere in parapsychology.11