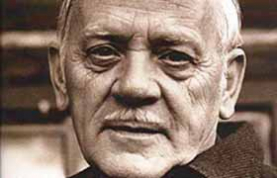 Robert Monroe (1915–1995) was an American radio broadcast executive and entrepreneur who became adept in out-of-body experiences. His patented Hemi-Sync technology, a means of inducing such states, is the basis of consciousness training programs offered at his research centre, The Monroe Institute (TMI). He wrote about these activities and experiences in three books: Journeys Out of the Body (1971), Far Journeys (1985) and Ultimate Journey (1994).

Robert Allen Monroe was born 30 October 1915 in Lexington, Kentucky, USA1 His father was a college professor and travel entrepreneur, his mother a doctor. His parents freely allowed him to pursue his interests, which included music, drama, trains, cars and aircraft. Later he expressed gratitude that his parents had not given him a strict religious indoctrination which would have been an obstacle to his consciousness explorations.

Monroe took pre-med courses at Ohio State College, switched to mechanical engineering, then dropped out aged seventeen. He turned to the hobo’s life of hitching rides on trains and took odd jobs, including a short stint as a newspaper reporter. After a year he returned to Lexington and re-entered college, where he worked on the college newspaper and radio station, then partnered with his first wife in a brief venture running a theatre company.

Monroe’s university radio experience landed him a job as a radio writer in Cleveland, Ohio, then another in Cincinnati, Ohio, where he learned all aspects of radio production. After a spell as a freelance writer, he got a break when NBC began broadcasting his show Rocky Gordon five days a week, enabling him at age 25 to purchase an airplane. He was then hired by the National Aeronautic Association to produce a weekly radio show on aviation.

Monroe became a major figure in radio in the 1940s and 50s; he produced shows such as Take a Number and Name That Tune, and acquired ownership of numerous radio stations. He was an innovator in sound technology, being one of the first to use magnetic tape.

Monroe describes the start of his experiences in the first of three books on out-of-body experiences (OBEs), Journeys Out of the Body.2 This occurred the spring of 1958, after he been trying to increase mental retention by listening to a tape while other sensory inputs were minimized: he suffered a severe cramp in the solar plexus which lasted for ten and a half hours. About three weeks later, following a brief sleep, he felt a sensation of being struck by an invisible beam of warm light, which paralyzed him and made his body vibrate violently. He was able to force himself to move after a few seconds.

This happened nine more times over the following six weeks. He then decided not to fight the phenomenon, whatever it was. On one occasion several months later, as the vibration started he pushed his fingers into the rug beneath his bed, and felt them touch the floor, then the ceiling beneath, then water below. The next time the phenomenon occurred, he found himself floating against the ceiling of his bedroom; looking down, he saw himself sleeping in his bed next to his wife.

As Monroe became more able to control this movement, he travelled further and was able to verify events he had seen while in the out-of-body state.  Many such accounts are described in his three books.

A few months after the onset of the phenomenon, Monroe suffered a heart attack and spent three weeks in hospital. During this time, his wife made copies of his notes and gave them to parapsychologist Andrija Puharich, who mentioned them in a book. However, Puharich had misunderstood the experiences to be the result of an addiction to glue-sniffing, and though a pseudonym had been used, Monroe’s reputation was damaged.

In the early 1960s, Monroe lost two close friends to death, and experimented to see if he might contact them in an out-of-body state. He reported that he visited and communicated with the spirit of one and also saw the other.

In the mid-1960s, Puharich introduced Monroe to parapsychologist Charles Tart, who had just received his PhD and had developed an interest in altered states of consciousness. Monroe participated in a series of tests supervised by Tart in which subjects who were able to move out of body at will were challenged to read numbers that were not visible from the bed where they lay. He did not succeed at this, although he had an experience that included veridical elements, as described by Tart.3

After the publication of Monroe’s first book in 1971, he and his third wife Nancy (née Penn) moved to an upscale property in Whistlefield, Virginia, where he built a small research laboratory. Having experimented with ‘sleep-learning’ through aural stimulus during sleep, Monroe now sought a sound technology that would stimulate OBEs. He had little success until one of his scientists came across a magazine article about binaural beats, the sound fluctuations that result when two slightly-different tones are heard in the ears. Monroe’s research team created audiotapes with binaural beats at the low frequencies that correspond to brainwave frequency at altered states of consciousness. At certain frequencies the right and left hemispheres synchronized, and experiment showed this did indeed produce OBEs.

Interest in this technique burgeoned, and Monroe decided to abandon his career in radio and TV, selling off the last of his interests. In 1975, he received the first of several patents for what would come to be called Hemi-Sync technology.4 The first Gateway program for personal consciousness exploration was held in 1977 with forty participants.

As interest grew, in 1977 he renamed his organization The Monroe Institute and moved it to a larger property, offering programs on an variety of specialized topics.

Joe McMoneagle, a leading remote viewer in the US Army’s Star Gate program, participated in a Gateway course in 1982, finding that it improved his preparation time for viewing and made his results more reliable. He later married Monroe’s stepdaughter Nancy ‘Scooter’ Lea, who became a key figure in the growth of TMI, serving as director from 1983 until 1991, when she fell out with Monroe.

Monroe’s wife Nancy died in 1992. He described having twice to visit her in the afterlife, but was so upset by the experience that he quit OBEs altogether. His physical and mental health deteriorated, a cause of his estrangement from Lea. He died on 17 March 1995, aged 79, having reconciled with her and with his stepdaughter Laurie.

Monroe’s descriptions of what he witnessed during OBEs are so prolific, complex and various that they defy summarization. The best sources are his books, which distill the notes of hundreds of experiences that occurred over a period of 35 years.

In Journeys Out of the Body, Monroe categorized his destinations into three ‘locales’, and calculated the percentage of his visits spent in each:

Monroe later simplified this schema to two categories: ‘local traffic’ or places nearby (that is, in the material world), and ‘interstate’ or highway,6 meaning places more distant and immaterial.

Monroe did not refer either to an immortal soul or to reincarnation, but was certain of survival beyond physical death: in the OBE state he met deceased persons and revisited apparent previous lives of his own. His cosmology includes heaven or hell only as part of what he called ‘the belief system territories’,7 in which strong believers receive rewards or penalties according to their beliefs. He felt that it was possible for human minds to refuse to see or accept that they have left a body, and therefore be ‘unable to free themselves from the ties of the earth life system,’8 remaining stuck in limbo until they realize their situation.

Hemi-Sync is fully explained by TMI researcher F Holmes Atwater in a paper published by the Journal for Scientific Exploration,9 and in more accessible terms in a 2007 biography of Monroe by Ronald Russell.10 Atwater writes: ‘individuals in an environment of restricted stimulation willfully focus attention on a combination of multiplexed audio binaural beats that are mixed with music, pink sound,11 and/or assorted natural sounds. In most cases the process also includes breathing exercises, guided relaxation, affirmation, and visualization’.12

The binaural beats cause the brainwaves to match their frequency, Atwater writes, and this can be measured by electroencephalography, regulating neuronal impulses to produce a desired state of consciousness, as attested by thousands of TMI clients. He cites scientific studies that show it promotes sensory integration, relaxation, meditation, stress reduction, pain management, improved sleep, health care, enriched learning and enhanced memory, creativity, remote viewing, telepathy and OBEs.13

Numerous readers of Monroe’s books have expressed gratitude to him for giving voice and context to their own experiences and for providing reassurance that OBEs are normal and not indicative of mental illness.

The Monroe Institute continues under current president and executive director Nancy McMoneagle, offering residential and online programs created by Monroe and others that use the Hemi-Sync technology. These are now available in the USA, Canada, France, Germany, Spain, Italy, Greece, Belgium and Romania. From the initiatory program Gateway Voyage, they diverge into various topics including healing, psychokinesis, remote viewing, lucid dreaming, near-death experiences and facing death. See www.monroeinstitute.org for information including articles, ebooks, audio and video. Hemi-Sync meditations for applications such as improving sleep and weight loss can be purchased either in MP3 or CD format at the website www.hemi-sync.com .

Robert Monroe’s Out of Body Experiences (Monroe in 1992 recounts events leading to the foundation of The Monroe Institute -1 hour).

Monroe’s welcome talk to a Gateway Voyage group, filmed in the 1970s.

Monroe’s Wednesday talk for Gateway Voyage participants (after they had first experienced other realities), filmed in 1990.

A collection mostly about Catapult: The Biography of Robert Monroe by Bayard Stockton, containing notes, correspondence and material on Monroe and TMI, is held by the University of California in Santa Barbara; see here.