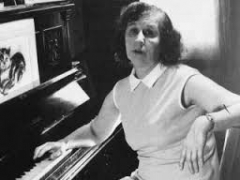 Rosemary Brown was a twentieth-century British medium who specialized in musical compositions. Over two decades she produced several hundred mainly classical pieces that she said were dictated to her by deceased composers. Her claims were controversial, although the pieces were acknowledged by many to have high artistic merit.

Rosemary Brown (née Dickeson) was born on 27 July, 1916, and brought up in Balham, South-West London, where her parents managed an assembly hall. She attended the local grammar school, to which she won a scholarship. Her childhood was marred by a bad-tempered father, but her later life was more comfortable as a result of a harmonious marriage to Charles Brown, a journalist and fellow Spiritualist, that produced two children. However Charles died in 1961 and the family's later years together were clouded by poverty. The deaths of her husband and her mother further stimulated Brown’s interest in Spiritualism. She was employed in a school kitchen until her growing fame enabled her to follow her mediumistic and musical activities. She never became rich, but earned enough eventually to employ an agent to manage her concert appearances. By temperament Brown was a mild, genuine character, not at all flamboyant. She died in 2001.

In her 1971 memoir Unfinished Symphonies: Voices from the Beyond Brown described as a child ‘seeing the spirits of the so called dead’.1 One, whom she later identified as the Hungarian composer Liszt, appeared to her when she was aged seven promising to return when she had grown up and ‘give her music’. She continued to experience ESP and see ‘spirits’ while at school, but realised that these psychic visitations made her different her from other people and kept them mainly to herself.

Brown’s mother played the piano occasionally and the household radio was sometimes tuned in to ‘easy listening’ programmes. As a child she attended ballet classes where she came into contact with some of the lighter classics. By her own account she received piano lessons for a ‘year or so’ until they had to be suspended because of financial constraints.2 In her teens she had two school terms of piano lessons, and at the age of 35 she took a further year of lessons.

At this time she was invited to play the organ for Balham Spiritualists’ Church, a task that involved several services each week and required considerable practice. One afternoon in March 1964, when Brown was recovering from an accident at work, she said Liszt appeared to her very vividly and took over her hands as she played the piano, playing music that was not of her own creation. She described the experience being as easy ‘as putting on a pair of gloves’3. Brown began to write down pieces at Liszt’s dictation. During one of her practice sessions she was overheard playing one of these pieces, and as a result was invited to play to the Wimbledon branch of the Churches Fellowship for Psychical Studies. Word soon spread among the Spiritualist movement and mediums who witnessed her performances named other composers who they said they ‘saw’ with Brown.

Brown also claimed that Liszt became insistent that the music should be conveyed to a wider audience. This became possible when Sir George Trevelyan, a member of the Church Fellowship, showed some of her scores to Mary Firth, a musical director at a college for further education. Firth was impressed and in 1968 helped to start up a fund for Brown to enable her to devote all her time to the music. Brown gratefully accepted the offer, but ended the arrangement after two years, feeling it placed her under an obligation  In 1969 Firth herself recorded a selection of Brown’s piano works.5

Brown now started taking piano lessons again, in order to be able to play the composers’ music to a higher standard. A recording contract was made with Philips, with the music played by pianist Peter Katin. A BBC Radio 3 broadcast with Geoffrey Skelton and Daniel Snowman followed in May 1970.6 Responding to claims that her compositions were based on cryptomnesia – unconscious memories of composers’ works - she agreed to be studied by Wilhelm Tenhaeff, director of the Institute of Parapsychology at Utrecht University, the Netherlands. Tenhaeff  reported that he was ‘unable to find a single mental aberration, neither did our psycho-diagnostic examination give reason to conclude any deviation whatsoever’.7 In 1973 she received further support from concert pianist John Lill and composer Richard Rodney Bennett. In 1975 the composer Alan Hovhaness orchestrated the first part of her Beethoven ‘Symphony’ using Brown’s piano score. This did not include the normal dynamics, tonal markings, phrasing and other performance details owing to Brown’s lack of technical musical knowledge, a characteristic that for Mary Firth marked her out as being most unmusical.8

By 1986 Brown claimed to have transmitted more than six hundred compositions9 by deceased composers. A German recording had been made in addition to the earlier Philips recording.10 She performed in London venues such as the Queen Elizabeth Hall, the Purcell Room and the Wigmore Hall, and featured in popular radio programmes such as Start the Week with Richard Baker.

Brown also received communications of relevance to other musicians. For instance Debussy was said to have given advice to pianist Richard Rodney Bennett concerning his performance of a prelude by the composer. Other compositions included a piece called Henrietta, said to have been dictated by Fats Waller, an unspecified item from Gershwin, and a song by the entertainer Gracie Fields. She received details about an unfinished opera by Viktor Ullmann named Der Kaiser von Atlantis with the libretto by Peter Kein, both of whom died in Auschwitz. A copy of the score was conveyed to Kerry Woodward, director of the Netherlands Chamber Choir, who through her was said to have received advice for amendments from the dead composer.11

In later years a growing number of non-musicians appeared to Brown. She reported:

After Brown began taking art classes she said she received communications from artists such as Turner, Blake and Van Gogh. She also claimed to have some experience of healing.13

In her lifetime the true origin of Brown’s music was the subject of controversy. At one point her original supporters Dr and Mrs Firth expressed doubts, suggesting that her works were merely influenced by the styles of the great composers, although they later withdrew these remarks.14

Vernon Harrison, a member of both the Liszt Society and the Society for Psychical Research, commented that Brown’s Liszt pieces were ‘not good enough to carry conviction that they emanate from the sources to which she attributes them ... but they are too good to dismiss lightly’.15 He was especially impressed with the Liszt item Grübelei which was partly dictated on 29 May 1969 in the presence of a BBC television crew filming Mrs Brown and the Composers.

Endorsements of Brown were given by leading professional musicians, including the concert pianist John Lill, and the composer Richard Rodney Bennett, who argued that it would have been impossible for a person of Brown’s limited talent to produce such music on her own. Hephzibah Menuhin suggested the music seemed to come from the composers’ early days. Leonard Bernstein was particularly impressed with the Chopin piece Fantaisie Impromptu. Humphrey Searle praised the Schubert piece Moment Musical in G minor, and with regard to the Liszt item Grübelei he stated, ‘It is the sort of piece Liszt could well have written, particularly during the last fifteen years of his life’.16

The concert pianists Robin Stone and Howard Shelley played her music, the latter stating her ‘Schubert’ contained the composer’s ‘essence’. Critic Derek Watson was impressed with her knowledge of Bruckner.

Some musicians have been more cautious in their assessment of Brown, and others totally unconvinced.

The critic Denis Matthews described her music as mainly ‘charming pastiches’ with naive manifestations of style. He claimed that her Beethoven largo e maestoso movement was a vague memory of the largo e mesto from the D major Sonata op. 10 no. 3 with a misremembered maestoso instead of mesto. He felt her Bach prelude based on the C minor from The 48 lost its harmonic progression, while a Chopin study was a ‘pale shadow’ of op.10 no. 4 in C sharp minor. In short, Matthews suggested that, far from tapping into a psychic source, Brown was re-creating compositions using her own conventional skills.17

David Scott Rogo, a musician and psychical investigator, attempted an experiment to establish whether Brown could produce music beyond her personal tastes. He asked her to produce either a Monteverdi madrigal, a Machaut choral piece, or (ideally) a dodecaphonic piece by Schoenberg or Webern. Brown declined, arguing that she needed to be on the same wavelength as the composer she was attempting to channel. Commenting on Brown’s work, Scott Rogo expressed disappointment with the similarity of the musical forms; he also criticized the over-use of sequences in the melodic line and the symmetrical measurement in the barring and phrasing.

Melvyn Willin, a musician and paramusicologist, made a study of Brown’s pieces and found them to lack textures and details that would have been characteristic of their supposed composers. Leading musicologists in British universities contacted by Willin were similarly unimpressed.18

It could be argued that the essence of nineteenth century music is harmony, yet despite this, many of her dictations exhibit a greater reliance on melody. For example her Grieg’s Shepherd Piping and Schumann’s Longing exhibit this discrepancy. Brown admitted that with at least two of the works, Debussy’s Danse exotique and Le Paon, she was left to write in the accompaniments herself, hence the use of harmonies that lack technical sophistication.19

Alleged contact with John Lennon produced three songs. However Lennon’s son Julian refused to be involved with them, while Bill Barry, an expert on Lennon lyrics commented, ‘John never wrote songs as bad as that’.20

Rosalind Heywood, a writer on ESP and a member of the Society for Psychical Research, created a psychological profile of Brown, concluding that the medium was driven to the automatic production of material beyond her normal capacity by feelings of frustration at her unused artistic capability.21 Heywood pointed out that Brown’s mediumistic ability developed after the death of a close member of the family – as had also been the case with mediums such as Margaret Verrall and ‘Mrs Willett’, who had been involved in investigations by the SPR in the early twentieth century. Heywood surmised that the show of ‘taking dictation’ might have been an unconscious ruse to evade direct responsibility. Similarly, psychologist Robert Kastenbaum explored the idea that the personalities Brown identified as deceased composers were actually secondary personalities, constructions of her unconscious mind.22

More straightforward accusations of fraud have been made by critics arguing that Brown engaged in covert music tuition in order to achieve the results she displayed, but without attempting seriously to substantiate these claims.23

Brown has been compared to Matthew Manning, a British medium who in his teens effortlessly produced drawings and paintings he believed were actually conveyed through him by deceased artists. Neither had previously shown any particular talent or was supported by professional training. Yet the works produced by both were of exceptional quality. There have been many musical mediums since the 1980s, but Brown remains unique for the sheer quantity of her output, even if the quality is held by some to fall short of the vision possessed by composers she believed were responsible.24