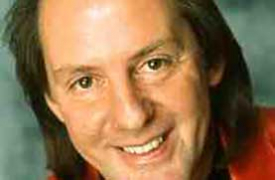 In his early teens, Matthew Manning (b 1955) became the centre of poltergeist activity in his family home and at his boarding school. He later found media fame for metal bending and similar psychokinetic feats and was often compared to Uri Geller. He also participated in numerous scientific experiments. In mid-life he turned his back on psychic activity as entertainment to focus on his work as a healer.

Matthew Manning was born on August 17, 1955, the eldest of three siblings. The family lived in Shelford, near Cambridge.

In 1967, the family began to experience unexplained disturbances, first noticed by his father Derek, an architect who was interested in psychical research. Ornamental objects were found to have been displaced, then were seen to move on their own. Rapping noises were heard. Doors opened and closed inexplicably. An investigator from the Cambridge Society for Psychical Research, ARG Owen, visited the house and concluded that the incidents were psychokinetic, and that they were focused on Matthew.

In 1968, the family moved to Queens House, Linton, Cambridgeshire, which had been built in 1731. Manning attended Oakham Public School in Rutland as a boarder.

When Manning returned home in July 1970, he again found himself the centre of poltergeist-type disturbances, such as footsteps, raps and doors opening. His bed moved at night, and sometimes levitated. Objects were thrown around him. The disturbances became so violent that he refused to sleep in his own room.1  Child-like scribbling appeared on the walls, one stating ‘Matthew Beware’.

The disturbances continued after his return to boarding school: his bed moved in the dormitory; objects such as screws, pebbles, cutlery, glass were thrown around; pools of water appeared; and icy chills were felt. These phenomena were witnessed by other schoolchildren. In 2014, former classmate Jon Willis described the disturbances as follows:

There were 24 of us in bunk beds. Things just started to happen. Water appeared from nowhere. I remember my bed moving when there was nobody near it. On one occasion this pile of dinner plates came crashing down, out of thin air, and shattered on the floor. Where they came from, who knows? Matthew was frightened. I was bloody terrified. It was the sort of experience that, unless you've been through it, you can't begin to comprehend.2

John Buchanan, the head teacher, wanted to have Manning removed from the school, but was persuaded not to do so by the school matron and by George Owen. Manning was instead taken to a psychiatric hospital; there he was instructed to use a ritual to remove the paranormal activity, but this had no effect.3

Characteristics of the Phenomena

The phenomena, which began in July 1970, and climaxed in the Spring of the following year, included the following.

During a holiday visit home in May 1971, Manning ‘heard’ a spirit who identified herself as ‘Henrietta Webb(e)’ and told him she died of a fever in 1673. He also experienced a vision of how the house had looked in 1731. The following month, he started to experience involuntary episodes of automatic writing, producing text in a calligraphy quite different from his own. The writer purported to be one ‘Robert Webbe’. In addition, signatures and dates in different handwriting began to appear on the panels and ceiling of his bedroom, at times when the room was empty; the number eventually totalled 616. This new activity coincided with a decline in the earlier poltergeist phenomena.

Scrutiny of parish records revealed that a family named Webbe had lived in the house during the eighteenth century, although this detail could not be considered evidential, as the name ‘John Webbe 1731’ was scratched into a brick in the house.4

Manning’s mother suggested he try automatic drawing, calling on the inspiration of a deceased artist. Since he lacked any artistic talent, she reasoned, a drawing that showed superior ability to his own would help to confirm the independent origin of the productions. As a result, he started to produce high quality pastiches of the work of celebrated artists, among them Dürer, Picasso, Beardsley, Da Vinci and Goya. Some were copies of existing works; others were originals. All were typically produced at high speed. He also created complicated Arabic scripts.

In April of 1972 a communicator calling himself Thomas Penn made himself known to Manning, providing correct diagnoses of people’s ailments when given their date of birth.

Manning abandoned plans to study psychology at Sussex University to write a book about these experiences. He started writing in 1973 with the working title Open to Suggestion, later changed to The Link.

He now travelled widely, giving demonstrations and submitting to investigation by scientists. He attended a conference for psychokinesis phenomena in Toronto in 1974 at the invitation of George Owen and the New Horizons Research Foundation, carrying out metal bending feats of the kind popularized by Uri Geller. In June of that year, he psychokinetically bent or split objects while an EEG machine recorded abnormal brain activity, observed by professors J Allen Hynek, Brian Josephson and Michael Persinger, among others. Kirlian photography carried out by Professor Douglas Dean during these activities displayed anomalies. In one experiment observed by Josephson a compass needle moved without contact.

Later experiments in Amsterdam were unsuccessful, and the experimenters felt that Matthew was more influenced by commercial than scientific interests.5 However, they reported an anomaly in the malfunctioning of a random number generator that became ‘stuck in a loop’,6 a common occurrence in his presence.

In 1976, Matthew participated in laboratory experiments with Dr Nils-Olof Jacobson and Jan Fjellander in Stockholm and Georg Wikman in Gothenburg, positively influencing the growth of seeds.7

By this time Manning had acquired an agent, Peter Bander, and was becoming involved in media activities. An appearance on The Frost Interview launched his career as a celebrity psychic; a subsequent tour of the US with numerous television appearances made his book a best-seller.  Further tours to the US followed, also to Spain and Japan. In 1977 he published a second book, In the Minds of Millions.8

I spoke to one of his former patients, who told me that she first went to Manning more than 20 years ago, suffering from breast cancer. "The doctors gave me three to six months," she said. "They told me that further treatment would be useless. Matthew was my last chance. I went to see him regularly for about a year. The heat from his hands," she added, "was phenomenal. When he put them near me I felt a shooting pain. When I looked at my skin afterwards, where his hands had been. I had marks, as if a flat iron had been pressed against me."

Throughout the 1980s, Manning lived an extravagant hard-drinking lifestyle, socializing with celebrities. He began to turn his back on this following his divorce in 1995. He remarried in 1998 and re-located from Suffolk to the west of England, where he holds healing circles and workshops. He has produced CDs of meditational music and books about his life and work.

Manning collaborated in numerous controlled experiments between 1977 and 1981, mainly in the US.

In an experiment carried out with Fred Lorenz, an animal physiology researcher at the University of California, heightened ‘healing’ activity was observed after he attempted to energize the nerves in frog skin.9

Mechanical coin-spinning experiments were carried out with Charles Tart and John Palmer at the University of California. An anomalous displacement effect was observed,10 but little evidence of psi.

In ESP experiments supervised by James Hickman and Jeffrey Mishlove at the Washington Research Centre in San Francisco,11 Manning was able to discover water or target pictures hidden in sealed containers.

A final experiment in California was a successful repeat of the seed test that he had done in Sweden the year before, with stronger growth observed from the seeds he had ‘energized’.

Manning was tested in experiments by William Braud and others in the Mind Science Foundation Laboratory, San Antonio, Texas. Initial tests in clairvoyance failed, but he was more engaged by later successful tests involving influences on biological systems. In one test supervised by John Kmetz, Manning attempted to kill cancer cells contained in a sealed flask: in 27 out of 30 trials the number of dead cells in the flask increased by between 200% and 1200%. These results were called into question when it was discovered that a similar effect could be achieved by shaking or dropping the flask; however, Braud emphasized that Manning had been closely scrutinized during the tests and was not observed making any such movements.12  They conclude as follows:

Throughout his visit, Matthew Manning exhibited ‘lightning flashes’ of dramatic psi. But even the background of these ‘flashes’ amounted to a consistent, sustained manifestation of extra-chance performance. Thus, M.M. seemed to differ from our typical volunteer subjects in that (a) he tended to perform well on a wide variety of tasks with sustained and consistent extra-chance scoring, and (b) the best of his ‘hits’ (his ‘lightning flashes’) were perhaps more impressive than those of the typical volunteer subject (e.g., his 1,200 per cent change score in Kmetz's cancer cell experiment, some of the correspondences in our slide-drawing experiment, his run of several perfect scores in our canister experiments).13

During a new visit to the New Horizons Research Foundation in Toronto, photographs of Manning were taken that ‘appeared to show diffraction rings (alternating light and dark circular bands) that could be ascribed to the emission of very high-frequency electromagnetic radiation in the microwave to far infra-red region of the spectrum’.14

In 1978, Manning was tested in London by Anita Gregory, Mary Rose Barrington and other members of the Society for Psychical Research. The investigation mainly employed ‘machine tests’ like those previously undertaken with Rudi Schneider, although Manning himself would have preferred tests on biological systems which had proved successful earlier and which he felt were more relevant to his activity as a healer. The results were found to be mainly positive, but the report published in 1982 was inconclusive. Disillusioned, Manning decided now to stop participating in laboratory tests and devote his time to healing.15

The signatures that appeared on the wall at Manning’s family home, together with selected automatic writings and drawings, were the subject of an investigation by Vernon Harrison, a handwriting expert. His detailed report was published by the Society for Psychical Research in 1994. Harrison concluded that the likelihood of hoax was small and that that the writings were genuinely paranormal.16 By contrast, sceptic investigator Joe Nickell maintained in a magazine article that the phenomena were fraudulent.17 (Article in preparation).

Manning has been a frequent target of criticism by sceptic James Randi. In 1977, the Sunday Mirror carried out a public test in which Manning mentally transmitted images from the top of London’s Post Office Tower and members of the public were invited to mail in their impressions. A statistical expert judged the results to be significantly above chance expectation.  Randi wrote to complain that the paper’s accounts contained ‘gross errors’ and ‘falsehoods’,18 and suggested that Manning could have cheated by sending much of the mail himself. This controversy was reported at length in the newspaper Psychic News in 1977.19

Harrison, Vernon (1994). The Signatures on the Walls of Queen’s House, Linton, Cambridgeshire and Some of the Automatic Scripts and Drawings of Matthew Manning: An Appraisal. Proceedings of the Society for Psychical Research 58.

Tart, Charles and Palmer, John (1979). Some psi experiments with Matthew Manning. Journal of the Society for Psychical Research 50, 224-228.