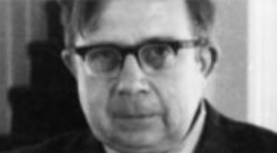 ARG Owen (1919-2003) was a mathematics professor and parapsychologist, notable for his poltergeist research and, with his wife Iris Owen, for the landmark ‘Philip’ experiment that generated both psychokinetic phenomena and communications with an invented deceased individual.

Alan Robert George Owen (known as George) was born on 4 July 1919 in Bristol. He attended a local grammar school, then Trinity College, Cambridge, gaining a first-class degree in mathematics and physics in 1940.1

During the 1960s, in addition to his academic duties, Owen pursued his developing interests in psychical research. In 1961 he investigated a poltergeist-type case in Scotland  and in 1967 visited the Manning family in Cambridge to learn about phenomena being generated by Matthew Manning, a schoolboy who later became known as a psychic and healer (see below).

The Owens emigrated to Canada in 1970 after George was invited to direct the New Horizons Research Foundation, a non-profit organization set up in Toronto to promote research on the frontiers of science. He was editor of the journal New Horizons from 1972 to 1977. In 1975 he founded the Toronto Society for Psychical Research to investigate ESP and psychokinetic phenomena.  For a period of five years (1975-80) he investigated a variety of psychical phenomena, continuing with his posts in both organizations until 1984.

Owen’s description of the Sauchie poltergeist case and analysis of historical cases, described in his book Can we Explain the Poltergeist? (1964), won him the William McDougall Award of the Parapsychology Laboratory of Duke University for distinguished work in parapsychology.

Owen travelled to Sauchie, Scotland in early 1961 to interview witnesses of poltergeist-type phenomena that had occurred in the household of an Irish family.2 The disturbances, anomalous rapping sounds and movements of furniture, were associated with eleven-year-old Virginia Campbell and witnessed by family members and neighbours, also a local vicar, doctor and school teacher. Owen found their reports credible and concluded that hallucination and hoaxing were not viable explanations. He found no reason to attribute the phenomena to a discarnate agency, speculating that the effects resulted from the emotional stress and physical changes in Virginia occurring as a result of entering pubescence. (See Sauchie Poltergeist)

Owen’s 1964 book Can We Explain the Poltergeist? provides a comprehensive analysis of reported poltergeist-type phenomena and potential normal and paranormal causes. Numerous examples are cited, as described by a reviewer:

[H]e lists, dating from ca. 1665-1961, 30 cases which he regards as probably spurious. He further quotes 20 of the older cases in which rank knavery seems to be indicated with relative certainty, and a further 34 cases mostly of a later date in which modern research has continued to expose a variety of human motives which can and do lead to spurious poltergeist phenomena. On the other hand the evidence for deliberate trickery is sometimes inconclusive and a review, of Podmore cases for example, may lead to their rehabilitation (such as the Worksop case) as being genuine and well-attested. We may also with fair confidence accept the Ham case.

Part II is headed ‘Some Genuine Poltergeists’ and Dr Owen lists 36 cases as having at least one witness of credit and showing either noises or object movements or both. He claims that these cases suffice to establish the reality of the classic poltergeist haunting, though they are not claimed to be all of equal evidential value.3

During his childhood the British psychic Matthew Manning (born 1955) seemed to be the focus of poltergeist-type effects, which led to him producing automatic writing and artworks credited to deceased entities. Many such incidents were witnessed over an extended period by his family and staff and pupils at his boarding school. Owen visited the family in 1967 and his findings were described by Manning in his own book on these early experiences.4

In 1974 Owen invited Manning to Toronto, where he gave informal demonstrations, moving a compass needle without physical contact and bending metal objects whilst being monitored by an EEG machine. (See Matthew Manning)

Similar tests were carried out with Uri Geller under the Owens’ supervision with outcomes they believed to be ‘genuine and paranormal’.5

In 1972 a group of members of the Toronto Society for Psychical Research, carried out an experiment in psychokinesis, which was led by Iris and attended by George,  They invented a fictitious character named Philip Aylesford, an English seventeenth-century aristocrat with a sensational backstory that included a beautiful mistress who was burned at the stake and spying activities for the king, and ended with his suicide aged thirty.  The sessions resembled a spiritualist séance with the exception that none of the participants claimed psychic abilities. Early efforts to make contact with ‘Philip’ through meditation failed, but after the protocols were changed to a more lighthearted approach the sessions generated raps and vigorous table movements. Communications from a putative deceased entity were received by means of raps, and these tended to correspond to the details that the group had invented.

Reminiscences by friends and associates of the Owens have been published by John Colombo,6 including contributions by William Roll, John Beloff, Michael Persinger and Guy Lyon Playfair. The book also contains chapters by ARG Owen on the history and activities of the New Horizons Research Foundation and the Toronto Society for Psychical Research. In a concluding chapter, Owen, reflects on his thinking and activities in psychical research.

Can We Explain the Poltergeist? (1964). New York: Garrett Publications.