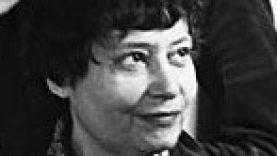 Anita Kohsen Gregory (1925-1984) was a German-born linguist and psychical researcher living in Britain, who investigated and wrote about parapsychological phenomena.

Anita Gregory was born Anita Kohsen on 9 June 1925 in Berlin into a Jewish family. She was sent to a convent in Belgium before joining her mother in exile in England. During the war she took a degree in languages at Birkbeck College, London and then read politics, philosophy, economics, psychology and physiology at St Hugh’s College, Oxford.

In 1954 she married Clive Gregory, emeritus director of the University of London Observatory. From 1971 until 1984 she taught courses in education, psychology and psychical research at the School of Education in the Polytechnic of North London.

In 1949 Gregory heard the philosopher William Brown sympathetically discuss alleged paranormal phenomena produced by Rudi Schneider, an Austrian medium, and subsequently attended a sitting. There she met Clive Gregory, with whom she collaborated on a book, Physical and Psychological Research: An analysis of belief (1954), on the relationship between relativity, psycho-analysis and psychical research. The couple went on to found the Institute for the Study of Mental Images which produced occasional publications from 1957, followed by their own journal Cosmos from 1961.

In 1966 Gregory was awarded a Perrott-Warrick scholarship to study the investigations of Rudi Schneider.  This led to a PhD awarded by London Metropolitan University on problems in investigating psychokinesis in special subjects. She was awarded the gold medal of Swiss Vereinigung für Parapsychology (Parapsychology Union) of Zurich in 1972. In 1980 she joined the council of the Society for Psychical Research, serving for five years as honorary secretary.

Gregory (writing as Kohsen) translated Russian researcher LL Vasiliev’s writings into English for publication under the title Experiments in Distant Influence in 1963.1She also edited the writings of Cyril Burt, published by Weidenfeld and Nicolson in 1975.

The Strange case of Rudi Schneider, a revised and reduced version of a monograph published in the Annals of Science,2 describes the investigations carried out with Schneider, notably by Schrenck-Notzing and Harry Price.  It focuses in particular on claims by Price to have discovered Schneider in fraudulent activity, arguing that these were unsubstantiated and may have been prompted by professional jealousy.3

Gregory organized experiments with Matthew Manning, who first attracted attention as the focus of poltergeist-type activity during his teens. The experiments included attempts to psychically stimulate the growth of beans and influence a pendulum.  Positive results were obtained, but the SPR’s report, published in 1982, was cautiously inconclusive.4 Disillusioned, Manning decided to stop participating in laboratory tests and instead work as a professional healer.’5 (See Matthew Manning)

Gregory made several visits to the house in Enfield which was the centre of alleged poltergeist-type disturbances in 1977-8.  She was critical of the investigation being carried out by fellow SPR researchers Maurice Grosse and Guy Lyon Playfair, insisting that the pair lacked professionalism and allowed themselves to be duped by a hoax. Her PhD thesis devoted a chapter to the case, and the controversy aired in the SPR journal.6 Another SPR colleague commented, ‘[T]he human problems which inevitably arise in any alleged poltergeist outbreak and were particularly fraught at Enfield were of the greatest interest to her and they were just the sort of thing which she, as a psychologist, could discuss with such consummate skill and understanding’.7

A New Theoretical Basis for Psi (1956, with C. Gregory). Hants: The Institute for the Study of Mental Images.

The O-Structure, An Introduction to Psychophysical Cosmology (1958, with C. Gregory). Hants: The Institute for the Study of Mental Images.

ESP and Psychology (1975) by C. Burt. Edited by A. Gregory. London: Weidenfeld & Nicolson.

A cosmological approach to a theory of mental images (1958, with C. Gregory). Proceedings of the Society for Psychical Research 52, 33-52.

London experiments with Matthew Manning. Edited A. Gregory (1982). Proceedings of the Society for Psychical Research 56, 283-366.

Stella C. – an account of some original experiments in psychical research (1973) by H. Price.  Journal of the Society for Psychical Research 47, 265-67.

The Geller Papers. Scientific Observations on the Paranormal Powers of Uri Geller (1977) by C. Panati. Journal of the Society for Psychical Research 49, 537-40.

Natural and Supernatural: A History of the Paranormal from Earliest times to 1914 (1978) by B. Inglis. Journal of the Society for Psychical Research 49, 826-28.