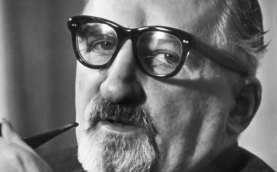 Wilhelm Tenhaeff (1894-1981) was a Dutch psychologist and parapsychologist, holder of the world's first chair in parapsychology at the University of Utrecht. He became well-known through his research and writings about the Dutch psychic detective and healer Gerard Croiset.

Wilhelm Heinrich Carl Tenhaeff was born in Rotterdam on 18 January 1894. His father was the director of a Rhine shipping company and intended his son to follow in his footsteps. However, Wilhelm became fascinated by the paranormal and gave up working in his father’s office to study psychology at Utrecht University from 1925. Inspired by his tutor, experimental psychologist FMJA Roels, he passed his master’s degree and started teaching an introductory psychology course there.

Together with PA Dietz, Tenhaeff founded the Tijdschrift voor Parapsychologie (Journal for Parapsychology) in 1928 and revived the Dutch Society for Psychical Research, which had been founded by G Heymans in 1920. He served as its secretary from 1930 to 1938 and as a council member from 1945. He was an honorary associate member of the Society for Psychical Research in 1936.

Having acquired his PhD at the end of 1933 Tenhaeff was ‘granted permission to teach parapsychology as a private teacher’ – a major breakthrough since the subject was not taken seriously in academic circles.1

During World War II he went into hiding to avoid arrest, having refused to co-operate at the university with the occupying German forces. The occupiers also stole the Dutch SPR’s money and assets.2

A teaching assignment in parapsychology in 1951 led to the founding of the Parapsychological Institute of the Utrecht State University. In March 1953 he received the special appointment of professor of parapsychology, the first to be granted anywhere in the world. He continued in the post until 1978 when he was succeeded by Henri van Praag.

Controversy concerning the appointment was voiced by Brian Millar, who undertook  extensive parapsychological research under John Beloff at the University of Edinburgh and then at the University of Utrecht. According to Millar, an offer by a private donor to fund the chair was withdrawn, following which the post was downgraded and funded by the Dutch SPR.3

Tenhaeff discovered Gerard Croiset in 1945 when Croiset was running a healing clinic. After testing, he concluded that Croiset possessed psychic abilities that might be of use to the police in solving crimes – notably in locating missing children.4 These activities made Croiset internationally well-known. In 1956 he moved to Utrecht to be closer to Tenhaeff, who frequently published research about Croiset in the Dutch Journal of Parapsychology.

In Tenhaeff’s ‘chair test’, Croiset was asked to provide information about the person who would sit on a randomly chosen chair at a future public event. Following the event, Croiset’s predictions were matched with the individual who had used the chair, and were often found to be accurate.5 Other researchers questioned the protocols used in this test, however.6

Recently discovered reports provide details of experiments carried out in the institute between January and September 1951, before its official opening, although these are marred by a lack of detail.7

Documents concerning Tenhaeff’s work are kept in the archives of the University of Utrecht. Some of his correspondence is held in the Special Collections department of the Koninklijke Bibliotheek in The Hague. Material relating to Croiset is maintained at the Johan Borgman Foundation in Utrecht.

Contacts with the Other Side: A Report on Spiritualism (1974). Berlin: Berlin University.

A well-evidenced precognitive dream (1939). Journal of the Society for Psychical Research 31, 2-6.

Seat experiments with Gerard Croiset (1960). Proceedings of the Parapsychological Institute of the State University of Utrecht 1, 53-65.

On the personality structure of paragnosts (1962). Proceedings of the Parapsychological Institute of the State University of Utrecht 2, 1-79.

Hoebens, P.H. (1986). Comparisons of reports of the ‘Denver’ chair test: A critical examination of the methods of W.H.C. Tenhaeff. Journal of the Society for Psychical Research 53, 311-20.

Kramer, W. and Luijtelaar, M. van (2016). An analysis of a series of experiments performed in 1951 in the Netherlands first parapsychological institute. Paranormal Review 78, 18-23.

Millar, B. (2017). The occult life of an extraordinary ex-parapsychologist. An interview with Brian Millar. Paranormal Review 81, 14.

Tenhaeff, W.H.C. (1953). Psychoscopic experiments on behalf of the police. Conference report no. 41. Paper presented at the First International Conference of Parapsychological Studies, Utrecht.