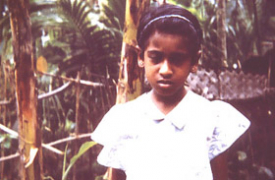 Thusita Silva recalled a life in a town far from where she lived in Sri Lanka. Thusita’s statements about her previous life, that ended by drowning when she fell off a footbridge, were recorded in writing by Erlendur Haraldsson and his associates before they attempted to verify the details.

Religions and Ethnicities of Sri Lanka

Thusita (a pseudonym) was born in 1982 in the small town of Elpitiya in southwestern Sri Lanka; her family moved later to Panadura near the western coast.

At the age of two and a half Thusita started to speak about a life in Akuressa, a town some thirty miles distant from Elpitiya and 78 miles from Panadura. Sometime after this, her only (and several years older) brother travelled to Akuressa but failed to find anyone that corresponded to her statements. On his return he scolded Thusita for telling lies.

Describing how the previous life ended, Thusita said she had fallen from a narrow suspension footbridge into a river and drowned. Her husband had thrown himself into the river to try to save her and had almost drowned too. The footbridge was near her old house.

She made several further statements:

Thusita mentioned more names, but neither she nor her family remembered them when Haraldsson interviewed them in 1990. By that time Thusita was eight and had forgotten some of her earlier memories, as is usual in cases of this kind.

Thusita’s mother stated that they had no connections with Akuressa, and none of them had ever been there at the time Thusita was talking frequently about her previous life.

In the summer of 1990 an associate of Haraldsson visited Akuressa, which has a population of about 20,000. He learned that a young woman with the married family name Nanayakkara had drowned after falling into a river from a narrow suspension bridge. He was unable to meet any members of the woman’s family.

A few months later, Haraldsson visited Akuressa with another associate, Godwin Samararatne. They found that in 1973, Chandra Nanayakkara, aged 27, had drowned while she and her husband were crossing the bridge. A plank gave way, and she fell into the swollen river. Her husband jumped in to rescue her and almost drowned himself. Chandra’s body was found three days later some distance down the river. She had been seven months pregnant at the time. She had lived in the house of her in-laws some one hundred yards from the bridge.

A document in the coroner’s office confirmed that Chandra had died in December 1973 ‘by choking after swallowing water when [she] fell into the River Nilwala from the suspension bridge’ (this is the only suspension bridge in the area). After Chandra’s drowning, the bridge was repaired, but in 1990 it was back to its earlier state of disrepair. Several people had fallen into the river since, but no one had drowned.

Briefly stated, the enquiries confirmed some of Thusita’s statements:

Some of Thusita’s statements, for instance that she had owned a brassiere, were too general to be useful. Others were partially or completely inaccurate:

This case has some interesting and typical features. Thusita started to talk about her memories at the age of two and a half, and did so persistently, which is typical. The memories center around a violent death, as is often the case with children who remember a previous life. Also, Thusita’s mother stated that her daughter had a phobia of bridges and water; again, such phobias are common among children with past-life memories, especially those concerning lives cut short by accident or violence.

Haraldsson and his associates planned to take Thusita to Akuressa for tests of recognition, but unfortunately her brother forbade that. This is the only case that Haraldsson investigated in Sri Lanka in which someone was uncooperative. 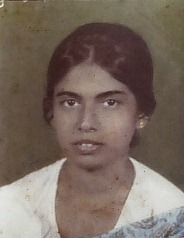 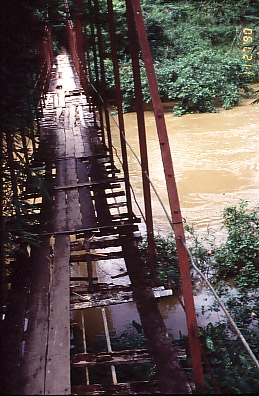