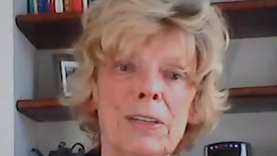 Zofia Weaver (b 1947) is a council member of the Society for Psychical Research with a particular interest in the history of mediums in her native Poland.

Zofia Weaver was born on 3 July 1947 in Katowice, Poland. Her early education was in Poland. She received a BA in Slavonic Studies and later a PhD in Language Universals from Nottingham University in 1980, then qualified as an English teacher at secondary level, but gave up her post to pursue a long-term interest in psychical research.

Weaver became interested in psychical research through reading Rosalind Heywood’s books The Sixth Sense (1959) and The Infinite Hive (1964), impressed by the author’s evident rationality and the amazing nature of the phenomena she described, some of which Heywood experienced personally.

Weaver joined the SPR in 1982. She was editor of the Journal of the Society for Psychical Research from 1999 to 2002 and is currently its associate editor.

Weaver’s studies have been principally of Polish mediums, notably Franek Kluski, who produced striking physical and mental phenomena between 1918 and 1925. She is keen to ensure that the material on this subject, collected by French researchers Gustave Geley and Charles Richet, becomes better known. Her 2015 book Other Realities? The Enigma of Franek Kluski’s Mediumship describes his varied career and significance to psychical research.

Together with Michael Nahm, Weaver is working on a translation of Norbert Okolowicz’s extensive work on Kluski.1 This highlights the variety of phenomena Kluski produced during his séances, including lights, movements of objects, materialized hands and their paraffin moulds, experiments with compass needles, apports, stigmata and other body marks, levitations, and apparitions.

Weaver has helped to expand knowledge of another Polish medium, Stefan Ossowiecki, describing in detail the experiments that were conducted with him.2 She has also translated into English descriptions of psychical phenomena observed by Julian Ochorowicz, a Polish philosopher and psychical researcher, notably during investigations with the Italian medium Eusapia Palladino in Italy and Warsaw. The latter were exceptionally well-documented, including detailed descriptions of the séances and commentary by attendees such as Bolesław Prus, the pen name of Aleksander Głowacki, a journalist, novelist and close friend of Ochorowicz, who wrote:

With so many various precautions, so much examination and self-examination, and with more than a dozen very successful sittings, I came to the conclusion that the mediumistic phenomena caused by Eusapia are not due to sensory illusions, nor suggestions, nor hypnotism. All the movements of objects, all the sounds, sounds of instruments, lights, etc.—all of these were real. And we, the witnesses, were normal observers and not victims of madness, possession, or hallucinations.3

A World in a Grain of Sand: The Clairvoyance of Stefan Ossowiecki (2005, with M.R. Barrington and I. Stevenson). Jefferson, North Carolina, USA: McFarland.

Mystery and Suspense in Creative Writing by Jacek Dąbała. (2012). Reihe.

The Musical Culture of Polish Benedictine Nuns in the Seventeenth and Eighteenth Centuries by M. Walter-Mazur Publ (2018). Peter Lang.

European Cases of the Reincarnation Type by I. Stevenson (2004). Journal of the Society for Psychical Research 68, 273-75.

Knock, Knock, Knock! Who’s There? by P. Waddington (2008). Journal of the Society for Psychical Research.

The Articulate Dead: They Brought the Spirit World Alive by M.E. Tymm (2010). Journal of the Society for Psychical Research 74, 25-26.

Mind-Matter Interaction: A Review of Historical Reports, Theory and Research by P.R. Heath (2012). Journal of the Society for Psychical Research 76, 122-25.

Science and the Afterlife Experience: Evidence for Immortality of Consciousness by C. Carter (2013). Journal of the Society for Psychical Research 77, 191-95.

Barrington, M.R., Stevenson, I, & Weaver, Z. (2005). A World in a Grain of Sand: The Clairvoyance of Stefan Ossowiecki. Jefferson, North Carolina, USA: McFarland.

Okołowicz, N. (ed.) (1926). Memoirs of sessions with the medium Frank Kluski: A collection of documents and evidence.