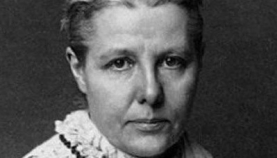 Annie Besant (1847-1933) was an English theosophist, socialist and women’s rights activist with an interest in psychical research for the purpose of spiritual development.

Annie Wood was born on 1 October 1847 in London into an upper-middle-class family. Her father died when she was young. Her mother supported the family by running a boarding house for boys at Harrow School. As a young woman, she travelled widely in Europe. In 1867, she married Frank Besant, an evangelical clergyman, and bore two children. The marriage foundered on political differences and her belief in women’s rights; the couple separated in 1873. She returned to London where she became immersed in Fabian socialism, developing a close relationship with one of its leading representatives, George Bernard Shaw. She lectured widely on excessive social control by the Church, notably its repression of women.

In 1889, WT Stead asked her to review The Secret Doctrine by Helena Blavatsky, the Russian-born co-founder of the Theosophical Society (TS). During the following years she became prominent in Indian politics and the Theosophical movement, and in 1893 she represented the TS at the World Parliament of Religions in Chicago. In 1907, she succeeded Colonel Olcott as international president of the TS, residing mainly at its headquarters in Adyar, Madras. She died there in 1933.

In 1884, the Society for Psychical Research (SPR) appointed a committee to investigate claims of séance-type phenomena by affiliates of the TS, notably those that concerned Blavatsky. The SPR commissioned Richard Hodgson, an Australian-born Cambridge graduate to travel to India to investigate the events. His subsequent report claimed the phenomena was produced fraudulently.1 Hodgson concluded:

We regard her [Blavatsky] neither as the mouthpiece of hidden seers, nor as a mere vulgar adventuress; we think that she has achieved a title to permanent remembrance as one of the most accomplished, ingenious, and interesting imposters in history.2

In a scathing rejoinder, Besant denounced Hodgson as ‘foolish and prejudiced’, and accused the SPR of harbouring a ‘child-like trust’ in the honesty and capability of its members. She argued that Blavatsky was incapable of ‘carrying out an elaborate and prolonged system of fraud’, being by nature ‘hasty, impulsive, unconventional [and] careless of appearance’.3  Hodgson countered by accusing her of ‘ignorance’ and ‘absurdity’.4

In 1907, Besant founded a rival organization in London named the International Club for Psychical Research (ICPR), which attracted occultists, spiritualists and theosophists.5 In 1911 it was thought to have six hundred members.6 The International Psychic Gazette, a monthly periodical, was started in 1912 as its official journal, but ceased publication after a few months.

In her talks and writings, Besant encouraged the development of psychic faculties, as long as this was undertaken with appropriate spiritual preparation.7 Examples of her own claimed experiences are described by Kurt Leland in Invisible Worlds: Annie Besant on Psychic and Spiritual Development (2014).

In Occult Chemistry (1908), Besant describes clairvoyant visions shared with Charles Leadbeater of the anatomical structure of elements, which she said they achieved by entering an altered state of conscious that enabled them to slow down of the movement of particles, thereby allowing them to see the nature of atoms in their natural state.8

SPR researchers acknowledged that Besant may have had genuine psychic experiences, but objected that her tendency to take them at ‘their most superficial face value’ with ‘utter disregard of any rules of evidence or canons of criticism’ limited their value in scientific terms.9

For a detailed list of Besant’s works see here.

For a detailed list of Besant’s articles see here.

For a detailed list of Besant’s editorials see here.

A Study in Consciousness: A Contribution to the Science of Psychology (1904). London: Theosophical Publishing Society.

Talks on the Path of Occultism (1930, with C.W. Leadbeater). Adyar: Theosophical Publishing House.

Proofs of existence of the soul (1911). Adyar Pamphlets 4. The Theosophical Publishing House.

Investigations into the super-physical (1913). Adyar Pamphlets 36. The Theosophical Publishing House.

The reality of the invisible and the actuality of the unseen worlds (1914). Adyar Pamphlets 40. The Theosophical Publishing House.

Modern science and the higher self (1915). Adyar Pamphlets 56. The Theosophical Publishing House.

Memories of past lives (1918). Adyar Pamphlets 96. The Theosophical Publishing House.

The necessity for reincarnation (1920). Adyar Pamphlets 113. The Theosophical Publishing House.

Man’s life in this and other worlds (1931). Adyar Pamphlets 156. The Theosophical Publishing House.

Selected books and articles about Besant

Hodgson, Richard et al. (1885). Report of the committee appointed to investigate phenomena connected with the Theosophical Society. Journal of the American Society for Psychical Research 1, 399.