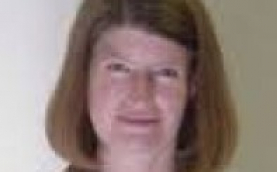 Deborah Delanoy is a British psychologist and parapsychologist who has conducted research in ESP and  DMILS (direct mental interaction with living systems).

Deborah Delanoy’s first degree, in sociology, was from the University of California at San Diego.  After receiving her BA she  returned to her native San Francisco Bay Area, where she worked first in publishing then in retail. She then moved to Scotland to pursue a graduate degree in parapsychology at the University of Edinburgh, under the supervision of John Beloff, and in 1986 was awarded a PhD for her experimental work exploring psi training in the ganzfeld

In 1985, the Koestler Chair for Parapsychology was founded at Edinburgh University, first held by Professor Robert Morris.  Delanoy worked as a research fellow for the Koestler Chair, from 1986 to 1999.  This latterly included job-sharing a visiting professor position with Morris, at the Institut für Grenzgebiete der Psychologie und Psychohygiene in Freiburg, Germany (1995-98).

After twenty years at Edinburgh, Delanoy took-up the position of professor of psychology, with responsibility for research leadership, at what is now the University of Northampton.  Here she was a founding member, and the first director, of the Centre for the Study of Anomalous Psychological Processes (CSAPP).  Latterly, she was the associate dean for the School of Social Sciences (research, business/enterprise development and internationalisation remit) at Northampton until her retirement in 2010.  She was elected president of the Parapsychological Association in 1994, served several terms as president of the Society for Psychical Research (2007-2011), and has received the Parapsychology Association’s Award for Lifetime Achievement.

Delanoy’s PhD focused on three studies that largely aimed to train percipients to learn to better differentiate between accurate and inaccurate responses to a psi-target, with the responses being generated under ganzfeld conditions.  This did not achieve successful psi outcomes. However, it helped inform subsequent psi-training activity conducted by Morris, Delanoy and Watt at Edinburgh, which developed extensive training protocols to help percipients improve at a psi (or any other) task, including methods for securely testing percipients in a laboratory environment.  Ganzfeld work at Edinburgh was greatly advanced by the development of an auto-ganzfeld testing environment created by Honorton, Radin and others at Edinburgh. It continues to be conducted at the KPU by Caroline Watt, the current holder of the Koestler Chair, and her students.

In 1989, Delanoy visited six different US laboratories to learn how they nurtured environments conducive to the expression of psi during experiments. Such information helped inform new and existing research programs at the Koestler Parapsychology Unit, which was becoming more established. Information was gathered from observing experiments and interviews with principal investigators. General principles that emerged were the importance of cultivating a supportive and friendly research environment, winning the trust and confidence of participants, and creating an expectation of success in experiments.  The selection of participants was also important to achieving successful psi outcomes, with a preference for those who are stable and open to psi, and who expect to perform well in the laboratory.1 These pointers proved to be of significant benefit to the KPU, which became one the most active and successful centres in psi research, especially with regard to ganzfeld telepathy.2

Delanoy conducted a number of DMILS studies, which investigated remote interactions in which an ‘agent’ attempted to interact with the physiology – electrodermal activity (EDA) - of another person (the ‘percipient’) under conditions of mutual sensory shielding.   Most of these studies focused on the relationship between agent and percipient and /or the role of the agent.   For example, in one study half the participant pairs were good friends while the other half were related pairs. Overall levels of EDA correspondence between agents and percipient was within chance levels and, contrary to expectation, friend pairs showed higher levels of concordance between their EDA patterns than close relations. More encouragingly, EDA concordance was significant during activate periods but not significant during calm periods as predicted.3

In 1993, Delanoy carried out a major review of the meta-analytic evidence for a wide range of psi phenomena. Her report covers reviews from the ganzfeld, PK on random number generators, precognition in the lab, distant influence experiments on human biology, and personality correlates with ESP performance, finding consistent trends and patterns in the data. Delanoy argues that the consistency of effects throughout various reviews suggests that psi data cannot be dismissed as merely random statistical fluctuations and that the effects demand further investigation.5

In a later review, Delanoy stresses the relevance of psi research to mainstream academia, in addition to its evidential value.6

Delanoy, D.L. (1999). The reporting of methodology in ESP experiments. In A Brief Manual For Work In Parapsychology, New York: Parapsychology Foundation, 35-49.