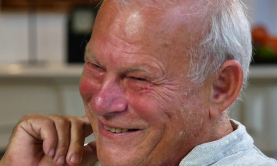 Dick Bierman is a Dutch psychologist and parapsychologist, with a  background in molecular physics. His experimental psi research has included work on ESP and presentiment effects. He has also experimented on the role of consciousness in quantum collapse.

Dick Bierman has worked in the departments of psychology of the Universities of Amsterdam and Groningen. He has been visiting researcher at the University of Lausanne and the University of the South Pacific and at the think-tanks StarLab (Brussels) and Interval (Palo Alto).

Bierman received his PhD and started his academic career with research in atomic and molecular physics. He then moved into AI and research on intelligent Tutoring Systems.  This led to a research focus on individual learning and later on learning during altered states of consciousness (sleep). A growing appreciation of the importance of feeling in learning, in addition to cognitive processes, eventually led to an interest in non-conscious emotions and their role in (intuitive) decision making. Here his regular academic work merged partly with his psi research.

Bierman’s career in psi research spans almost fifty years, starting at the 1972 annual convention of the Parapsychological Association in Edinburgh. There he met Evan Harris Walker who presented his Observational Theory of Psi. He returned home with the plan to test this theory, which, at least in principle, seemed to integrate consciousness into physics.  Together with Houtkooper, who developed the first Zener-based hardware RNG that was connected to a computer (PDP-8), he ran his first PK experiment, manipulating the ‘observational history’. The subsequent report was  published as the first article in the first issue of the European Journal of Parapsychology.

In subsequent years Bierman extended the development of the (RIPP) RNG, first for the Apple II and later with serial connection to be connected to any computer. These RIPP RNG’s were sold around the world: Bierman later became a crucial point of (prior art) defence in a lawsuit between Intel and others and an individual claiming the patent for RNGs inside the computer.

During this time the centre of psi research in the Netherlands was at the University of Utrecht, where Bierman obtained his special professorship in parapsychology (this chair later moved to the Humanistic University in Utrecht).   Researchers from the parapsychological department at Utrecht, who included Richard Broughton, Brian Millar and Susan Blackmore, held regular meetings with the Amsterdam team and a group from the SRU (Hans Michels) in Eindhoven to discuss theories and how to test them.

Bierman’s major research topic shifted to the fashionable ganzfeld experiment. But, as with his first PK experiment, he always used these experiments to test theory-driven process-oriented hypotheses. The results culminated in the formulation of a physical theory called CIRTS (Consciousness Induced Restoration of Time Symmetry). The theory holds that fundamental time-symmetry is restored in physical systems which contain highly coherent information processors such as the human brain. It claims to be a universal theory, but seems to account for the phenomenon of presentiment in particular.

In recent years Bierman has adopted more sophisticated techniques to probe the presentiment effect, using brain signals where it is possible to directly test the supposed time-symmetry and associated brain processes.

Bierman has repeatedly stressed the importance of replication, not only in parapsychology but also in psychology. His presentiment work, for example, was intended to replicate Dean Radin’s experiment;1 also, some of Rupert Sheldrake’s work on phone telepathy and staring was replicated by Eva Lobach and Dick Bierman (see below).

Bierman has investigated the potential impact of questionable research practices on experimental psi outcomes, developing measures to mitigate methodological and statistical issues. In a seminal paper, Bierman and James Spottiswoode consider how much of the anomalous data in ganzfeld research can be explained away by assuming that psi researchers use the same questionable research practices  as psychologists, and to the same degree. Their simulation suggest that, under these assumptions, the global results of more than a hundred ganzfeld experiments would have to be corrected, leaving a probable effect size of around 0.07 – only slightly significant. The authors argue that the major source of QRPs arises from selecting data that is biased by hypotheses instead of using of all the data – for example, the ‘file-drawer effect’ that results from a failure to publish non-significant studies. Finally, they outline progressive measures being adopted by the academic and parapsychological community: pre-registration and automatic real time uploading of all results, labelled formal or informal, where only formal results enter the pre-registered analysis.2

In 2011, Daryl Bem3 reported experiments in which participant behavioural responses – binary choices and reaction times – were apparently influenced by future information. These retroactive effects were investigated by Bierman in two phases. In the first phase, participants were instructed to respond to two randomly-chosen symbols and ignore two other symbols. In the second phase, half of the participants were asked to go as quickly as possible (speed instruction), while the other half were encouraged to be as accurate as possible (accuracy instruction).  In the second phase only one symbol was to be responded to. Bierman (with his student Aron Bijl) hypothesized that the second phase would have a practice effect on the first phase, through a retroactive influence rippling back in time. Analysis supported this prediction: participants responded significantly faster to the symbol that they were about to react to during the second phase, (p = 0.038). Participants with an intuitive thinking style were responsible for this significance; intuitives alone achieved highly significant results: (p = 0.001).4

In similar research, Bierman exploited a well-known optical phenomenon, the transparent Necker Cube, which can be viewed from top to bottom or from bottom to top, enabling the user to switch between perspectives. In this experiment, participants were asked to view the Necker Cube from top to bottom and press a button once they felt their perception had changed to bottom to top, these reaction times being recorded. Immediately after the button press, participants were presented with an opaque Necker Cube, the version being determined randomly. Bierman hypothesized that if the randomly-decided Necker Cube was also the top to bottom version (congruent with the first cube viewings), participant reaction times would be shorter, as if they were being affected by future information. This was confirmed by analysis of both the pilot and confirmatory studies (p = 0.026).5

Bierman and Jacob Jolij investigated presentiment effects occurring in Jolij’s regular EEG psychology studies. These presentiment experiments started as a ‘sanity check’ on Bierman’s regular psychological EEG work (an analysis that researchers perform to check that the analysis does not provide significant data where this should be impossible).

In the standard experiment, the task involves identifying a schematic face in the middle of a series of rapidly presented (100 ms) white noise images. A random process presents the face in some trials and not in others, a standard set-up in psychology studies that can be exploited to investigate presentiment by tracking EEG responses before the face is flashed to the participant. In later analyses, a prediction of the upcoming stimulus (face or no face) is made by analyzing the pre-stimulus baseline region of the EEG, which reveals differences between the two categories. The group has consistently found a prediction accuracy in the 51%-53% range, only marginally above the 50% chance level, but very significant statistically given the large number of trials.6

In other work probing a consciousness-quantum relationship, both EEG and behavioural measures (subject image determinations) are recorded (the EEG often presents a neural signature when the face is shown, compared to when the face is absent). Subjects whose EEG signature indicates an image are more likely to correctly identify the presence of an image, if it is actually present. Similarly, subjects whose EEG patterns suggest no face, are less likely to claim there is a face, if no face is present (false positive call). True hits (when the subject determination of a face is in agreement with the presence of a face) and true misses (when the subject determination of no face is in agreement with the actual absence of a face) are compared between random sources: in several experiments, remarkable differences in speed of identification and accuracy have been recorded, superior performance coming from quantum-generated stimuli rather than pseudo-randomly generated stimuli.

These findings have significant bearing on the role of consciousness on quantum collapse, favouring Wigner’s interpretation that consciousness is a requisite for collapse.7  They might also impact theoretically on the discussion of the concept of randomness and, practically on the use of randomization in science.

This work follows earlier research by Bierman that more directly probed the quantum-consciousness connection. A long-standing problem in physics involves understanding the role of consciousness on the collapse of the wave function. A minority viewpoint in quantum mechanics views consciousness as fundamental in this process. Bierman arranged for pairs of participants who are connected to an EEG to observe a quantum process: the radioactive decay of Americium-241, where for some trials one member of the pair observed the decay event after the other member had pre-observed the event. Bierman theorized that if consciousness is involved in quantum collapse there should be a difference in EEG patterns between pre-observed and non-pre-observed in the final observed EEG. This exactly what was seen, to a comfortably significant degree (p = 0.0106).8 However, a replication attempt failed to find the same evidence for an effect of pre-observation on EEG patterns.

Sense of Being Stared at

By 2004, Rupert Sheldrake had reported a large body of studies testing the sense of being stared at. Bierman reports three replications of this work under conditions of sensory shielding, in which participants registered their guess as to whether or not they were being stared at in a computer. Altogether 188 sessions comprising 4784 trials were completed. The overall hit rate was not statistically significant and close to the 50% expected by chance. The strongest effects appeared when a sceptic acted as a starer, although this might have resulted from his extreme extraversion. Bierman speculated that his more stringent testing conditions, for example situating starers behind one-way mirrors, might have accounted for the poorer outcomes compared with Sheldrake’s studies, which for the most part used weak methods.9

Testing telephone telepathy, another of Sheldrake’s signature experiments, Bierman and Lobach arranged for six participants to choose four close friends or relatives to act as callers. All participants completed a total of 36 trials (six sessions of six trials each). At a different location another experimenter used a die to select a caller about five minutes before the scheduled trial. Then he or she contacted the caller, who was asked to call the participant after five minutes, focusing thoughts on the participant for the last two minutes before the call was made. When the participant’s phone rang, he or she guessed which of four friends was calling before answering the call. Analysis revealed a significant overall scoring rate of 29.4% (p = 0.05) where 25% was expected by chance.

Of note: almost all the effect was seen during sessions conducted at times predicted to be the most advantageous, according to previous research on local sidereal time (where the position of Earth relative to the stars is said to influence ESP scoring). Scores in these sessions were highly significant at 34.6%.  A stronger emotional bond between participant and caller was also found to be associated with a higher hit rate. Bierman concluded that his experiments revealed evidence for telephone telepathy.10

Bierman, D. (2011). Anomalous switching of the Bi-Stable percept of a necker cube: A preliminary study. Journal of Scientific Exploration 25, 721-733.

Bierman, D.,  Spottiswoode, J.,  Bijl, A. (2016). Testing for Questionable Research Practices in a Meta-Analysis: An Example from Experimental Parapsychology. PLOS ONE. 11/5.

Lobach, E., Bierman, D. (2004b). Who is calling at this hour? Local sidereal time and telephone telepathy. Proceedings of the 47th Annual Parapsychological Association Convention.

Radin D. I. (1997). Unconscious perception of future emotions: An experiment in presentiment.  Journal of Scientific Exploration 11, 163-180.