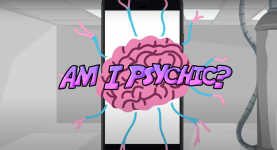 In recent years parapsychologists have been developing new methods of testing for psi, based on digital technologies. These include double-slit optical systems, mobile apps and mass online testing.

Since the 1980s, psychokinetic ability has been tested by means of random number generators. A more recent approach, adopted by Dean Radin at the Institute of Noetic Sciences (IONS), uses a double-slit optical apparatus to test the idea that consciousness influences the behaviour of quantum systems.

Radin reported experiments where participants directed their attention away from and towards a sealed double-slit optical system at a distance of three meters. They were asked to place their minds at the location of the detector and try to identify which path the photons had taken, in the process reducing the wavelike nature of the light and increasing the particle-like nature. They were given real-time audio feedback with regard to the amount of wave-like behaviour measured in the interference pattern. One hundred and thirty-seven participants were tested in six experiments for a total of 250 test sessions. A very small effect was found, around one part in a thousand, but this is statistically very significant: (z = -4.36, p = 6×10-6).1

The most successful subjects were experienced meditators; non-meditators produced results close to chance.  Psychological variables such as openness to experience, proneness to absorption and level of attention (as measured by EEG) appeared to correlate with the degree influence of the interference pattern.

To eliminate the possibility of influences such as body temperature, Radin designed a follow-up online experiment, with the eventual participation of around 1500 people in 77 countries. The effect size was a magnitude smaller than that found in the lab, but gave a hugely significant z-score of 5.72 (p = 1.05×10-8).2

In the experiments described above, trillions of photons were measured each second. To test the influence of consciousness in a more detailed fashion, a double-slit system was developed in which a single photon registered at any one moment. Two hypotheses were tested. In the ‘consciousness causes collapse hypothesis’ (CCH), attention directed at the system causes the interference pattern to become less wave-like and more particle-like. In the ‘consciousness influence hypothesis’ (CIH), attention may either increase or decrease the wavelike nature, depending on goal-oriented factors such as feedback, subject motivations and experimental set-up. Across a total of six experiments, some were significantly positive and others significantly negative, resulting in an overall mean shift at chance level, but highly significant variance, with a z score of = 3.95, p = 3.77 × 10-5, supporting CIH rather than CCH.3

Gabriel Guerrer, a physicist based at the University of Sao Paulo, Brazil, has independently replicated the double-slit experiment.4  In the initial five experiments, he achieved a highly significant result over 160 sessions (z score 3.95, p= 10-5). He then pre-registered a further 120 sessions, which unexpectedly gave significant results in the opposite direction to that anticipated when analysed according to the CCH. When the data were analyzed according to the more successful CIH, by looking at the degree of variance, this resulted in a significant z score of 2.75 (p = 0.01), further supporting the CIH model.

Guerrer is continuing this research in Rio de Janeiro as a privately funded investigator.

Radin is adapting similar mainstream physics experiments to look for signatures of conscious influence. The main focus is on entanglement – the phenomenon of particles with a shared past communicating instantaneously over distance – looking to see if human intention can strengthen these correlations.5 This experiment is being also being carried out in France at the Institute Metapsychique by physicist Peter Bancel.6

At IONS, Radin is developing a next generation double-slit system capable of detecting which slit the light goes through, to see whether this knowledge affects the ability of a subject’s intentions to influence the photon’s behaviour.7  Radin is seeking to make this research more accessible to interested investigators by creating an affordable version.8

Mobile technology has brought new opportunities to expand psi testing among the general population. Several psi applications are currently available and others are in development.

Am I Psychic is an app developed by Dominic Parker, a PhD candidate at Saybrook University, Oakland, California, testing for precognition or psychokinesis by means of dice, cards or spoons.12

Here, the random number generator is based on a random selection of a seed number that provides the string of numbers sent to the phone. It is therefore a pseudoRNG, but thoroughly tested and passed for randomness.

The app encourages the user to send the data for scientific analysis. Several years worth of data will be analyzed as part of Parker’s PhD thesis.13

Entangled is a mobile app being developed by inventor and tech entrepreneur Adam Curry.  It uses the random processes inherent in an iPhone’s accelerometer to generate the random numbers on which its operation is based. The Entangled project is designed as a mass test of the influence of human consciousness on random systems – a huge PK experiment conceptually replicating the Global Consciousness Project, where each phone is turned into a random number generator. The project has three objectives:14

The Internet is increasingly being used to facilitate mass psi testing that is both economical and tightly controlled.

The Gotpsi online suite of tests hosted at IONS has been in operation since 2000. The brainchild of Dean Radin, it tests for psi performance in three major classes of experiments: forced-choice tests, spatial tests, and remote viewing.  With over 250 million trials from 350,000 people, this represents the largest body of psi data ever collected, to be used to look for subtle patterns suggestive of psi.16

Forced-choice Tests. Two forced-choice tests were conducted: a card test in which a target card was chosen from 5 possible options and a simple 3-choice picture guessing task. Over 100 million trials from an estimated 200,000 individuals around the world were collected. The direct hit rate combined across both experiments came close to the expected 20% chance level, but a planned secondary analysis based on previous research resulted in an extremely significant deviation of z = 10.6, p < 10-25. In this analysis, a pattern in the hitting and missing that had been camouflaged by standard significance tests emerged strongly. Control tests found no evidence for optional stopping, response biases, target sequence dependencies, learning of subtle cues, or other potential artifacts.17

Spatial. The user is asked to guess where on a blank screen a dot will be placed. After the choice has been made, the web server randomly picks a location and calculates a probability value for the subjects guess. After 18 years there has been nearly 600,000 sessions, totalling 48.5 million trials. Radin reports a very large positive influence of belief in psi on the outcomes to a hugely significant degree, with a z-score in excess of 5 (p = 10-6).18

Remote Viewing. The user imagines what image will be presented later and completes a simple binary questionnaire for the presence or absence of features such as people, open spaces and water features. The image is presented and a probability value calculated for the trial. After 18 years a total of 1.2 million trials have been collected, again revealing a hugely significant relationship with belief in psi (p = 10-8).19

Online testing affords the opportunity to ask new kinds of questions because of the large amount of data that can be collected and readily analysed. Accordingly, some parapsychologists host websites that are totally dedicated to harvesting data, and also use online testing to augment their lab-based research. A leading example is the work of Markus Maier’s team at the department of psychology at Ludwig-Maximilians-University in Munich, Germany.20  The team have carried out many experiments, testing for precognition (especially replicating Daryl Bem’s work) and more recently psychokinesis.

In a large-scale experiment recently reported in Frontiers in Psychology, Maier and Moritz Deschamps reported on data taken from 12,500 participants who were recruited online by a data-collection company.21 Subjects were exposed to auditory and visual stimuli designed to elicit either a positive emotion (photos showing aspects of social belonging and affiliation, landscape shots, and pictures of cute animals and pleasantly sounding harmonious chords), or negative emotions (pictures depicting imminent danger or pitiful and nauseating images and anxiety inducing discordant sounds). These images and sounds were controlled by a true random number generator (based on quantum processes). It was hypothesized that underlying motivations to seek pleasant stimulation rather than unpleasant stimulation would bias the random output accordingly. The overall results were close to chance. However, the researchers noted an undulating pattern in the temporal evolution of the PK effect, which had been predicted beforehand on the basis of previous research and theory.  When this harmonic oscillatory effect was modelled mathematically, it was found to be statistically significant. Such findings are important because they support new theories about psi production.22

Neuroscientist Julia Mossbridge, based at the Institute of Noetic Sciences (among other appointments), is a leading researcher in the phenomenon of presentiment, where the body responds seconds in advance of unpredictable future events – a major line of parapsychological research. A concern is that during an experiment, expectancy effects might account for some positive results. To counter this, Mossbridge developed a single-trial testing paradigm in which only the first trial is used, for which there can be no expectancy issues.

Mossbridge has investigated presentiment in the brain’s EEG patterns, skin conductance and heart rate using this approach. In a typical study, subjects selected by Amazon’s Mechanical Turk – an online platform where people are paid to take part in research – sit in front of their console while a smartphone app measures heart rate responding to a camera light flash. They are instructed to guess which of four cards will win $2, and wait to see if they are correct. Mossbridge has found pre-stimulus heart rate differences based on future outcome. Gender is a clear moderating factor with men showing stronger pre-stimulus heart-rate effects.23