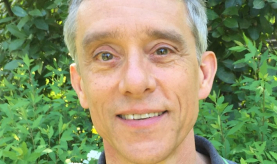 Peter Bancel is an American experimental physicist who carries out psi-research at the Institut Métapsychique International in Paris.

Peter Bancel received a doctorate in physics from the University of Pennsylvania. Following post-doctoral work at IBM, he moved to France where he worked for the Centre National de Recherche Scientifique in Paris and later at the Institut des Matériaux de Nantes. His mainstream interests have included phase transitions in two-dimensional systems, quasicrystals and protein crystal growth.

Bancel became interested in parapsychology in 1999 when he spent several months as a guest researcher at Princeton’s Engineering Anomalies Laboratory. Beginning 2001, and following an invitation by Roger Nelson, he began work on analytical issues pertaining to the Global Consciousness Project (GCP). He continued to work over the next fifteen years on improving the analyses and understanding the nature of the GCP effect.  He has published work on approaches to improving psi effect sizes, theoretical assessments of meta-analyses in psi databases and precognition experiments with meditation practitioners. Current research investigates the interaction of psi and entanglement in quantum systems.

Bancel works at the Institut Métapsychique International in Paris, France.

The Global Consciousness Project (GCP) is a long-term experiment investigating the possibility that, when the consciousness of many people is drawn to focus collectively on an incident or an event, the resulting ‘collective consciousness’ may induce deviations in a global network of random number generators. Tests of the hypothesis over a 17-year period have been carried out on 500 global events – such as terrorist acts and New Year’s Eve celebrations. The tests yield a cumulative result that rejects the null hypothesis by 7 standard deviations (p = 10 x 10-12). Because the GCP incorporates pre-registration of its hypothesis tests, this result offers particularly strong support for a psi effect.

However, Bancel’s analyses conclude that the anomalous effects are not due to the hypothesized global consciousness effect, but rather to psychically-enhanced decisions made by the experimental team when setting the parameters for individual hypothesis tests. Bancel arrives at this conclusion by i) demonstrating that the GCP data cannot be explained by any causal models based on global consciousness and, ii) that the GCP data exhibit a predicted signature that is consistent with intuition enhanced data-selection.

Bancel has discussed what is required for parapsychology to become more accepted within mainstream science. He argues that the current situation impedes the development of the field and prevents parapsychology from flourishing. He proposes that the principal characteristics of nascent scientific disciplines be identified and then nurtured within parapsychology. He examines three sectors of parapsychology: theory, experiment and social features, concluding that theory is the weakest. From this he argues that the most effective way to develop the field will be to concentrate efforts on theoretical development. He gives examples from physics where previously marginalized areas were rejuvenated when anomalous findings were explainable by improvements in theory, such as quasicrystals, an area to which he has contributed.1

For Bancel, a drawback of meta-analytic evidence for psi effects is that meta-analyses are often compromised by the inclusion of studies contaminated by methodological and statistical problems, termed Questionable Research Practice (QRPs). The problem, which is not specific to parapsychology and is widely recognized throughout the medical and social sciences, is central to the oft-cited ‘replication crisis’ that challenges the validity of published results across disciplines.

A novel approach by Bierman, Spottiswoode and Bijl used simulations to test whether meta-analytic databases can be explained by QRPs alone. They applied their method to ganzfeld telepathy research and found that the ganzfeld effect size reduced to marginal significance when worst-case QRP scenarios are simulated. By improving the power and efficiency of the simulation method, Bancel was able to show that the ganzfeld data do remain significant, even when worst-case QRPs are considered. Applying the QRP simulation method to the micro-PK database, Bancel found that the heterogeneity – wide variation in outcomes – cannot be explained even in the worst-case QRP scenario. He concluded that this supports the existence of a genuine psi effect in the data.2

In a chapter on research with random number generators for Parapsychology: A Handbook for the 21st Century, Bancel and co-author Mario Varvoglis pose four questions:

The chapter considers the entire 50 year history of the field and concludes that there is strong evidence for an effect, principally driven by the existence of a large corpus of studies with exceptionally large outcomes (p values of at least 0.001). The presence of such studies reduces the likelihood that the outcomes can be explained by the file-drawer effect – the intentional non-publication of negative findings. The conclusion was subsequently buttressed by the simulation work mentioned above.

The authors examine the question of whether the micro-PK data indicate a psi effect that is widespread, or instead is an ability found rather rarely in gifted subjects or experimenters (the so-called universalist versus elitist paradigms). They conclude that the elitist paradigm is more consistent with the data, and discuss that this can explain the unsuccessful replication of the Princeton Engineering Anomalies Laboratory protocol, published in 2000. The chapter also examines the contributions of Helmut Schmidt, one of the most prolific experimenters in the field. The discussion highlights that skilled experimenters may tacitly create conditions favorable for psi effects, and that this represents a type of non-psi experimenter effect.

Working with a team at the Paris Institute, Bancel designed a new precognition protocol aimed at providing an optimal environment for psi functioning. Unselected volunteers are immersed in an immersive audiovisual environment to create a psi-conducive state of consciousness and then run through the experiment. For each trial, participants selected an opaque sphere that they felt contained a facial image. Once a selection was made the automated protocol randomly determined whether the sphere would be empty or not, and whether feedback should be shown. Eighty-two participants contributed over 3000 binary trials. The overall hit rate was close to chance at 50.1% where 50% is expected. More encouragingly, feedback trials (51%) were more successful than non-feedback trials (48.6%). Additional analyses indicated improvements in scoring over time for feedback trials, supporting the idea that participants were developing mental strategies to cultivate their precognitive ability.

Additionally, a subgroup of 26 experienced meditators yielded a hit rate of 52.1%; for the most experienced nine the rate was significant at 54.1% (p = 0.01). These results are consistent with previous findings showing that meditators are adept at producing psi in controlled settings. However, more data is needed to confirm these indications.3

Bancel, P.A. (2019). A reassessment of some micro-PK results. Proceedings of the 62st Annual Meeting of the Parapsychological meeting.

Bierman, D.J., Spottiswoode, J.P. & Bijl, A. (2016). Testing for Questionable Research Practices in a Meta-Analysis: An Example from Experimental Parapsychology. PLoS ONE 11/5.