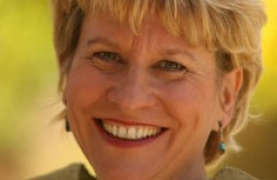 Marilyn Schlitz is a social anthropologist and psi researcher, holding a PhD in anthropology. She is department chair at the Institute of Transpersonal Psychology at Sofia University and president emeritus and senior fellow at the Institute of Noetic Sciences. Schlitz has contributed to psi research in the areas of distant intentionality, healing and special gifted populations. She has also addressed the sceptic-proponent relationship through research and dialogue.

Schlitz is currently conducting studies on the psychomantium as a means to explore grief and other altered states of consciousness. Her team is comparing outcomes before and after sessions, and also between a physical immersion chamber and a virtual reality condition.

In an experiment reported in 1980, Schlitz collaborated with Elmer Gruber in long-distance remote-viewing.1 Gruber, in Rome, travelled to a randomly-chosen venue and attempted to transmit what he saw there to Schlitz in Detroit, who sketched her impressions; five independent judges later assessed the accuracy of these during visits to the locations. Overall results were extremely significant (p = 10 × 4.7–6); six out of ten sessions were direct hits where two are expected by chance.  Schlitz and Gruber successfully replicated this experiment a few years later.2

Schlitz investigated whether certain populations are more psi conducive than others taking part in ganzfeld telepathy experiments. Twenty dance, drama and music undergraduates at the Juilliard School of Performing Arts in New York City acted as receivers in a standard automated ganzfeld session. The overall hit rate was large at 50% (p = 0.014), double the chance expectation and far exceeding typical hit rates in ganzfeld experiments, which are around 32%. Musicians were the most successful, scoring six hits in eight sessions (p = 0.0042).3

In the first of many such experiments, Schlitz investigated whether humans can influence other people and organisms at a distance, a line of research subsequently termed DMILS (direct mental influence on living systems).  Schlitz tested whether anxious volunteers with a strong need to be calmed by distant influence would show greater evidence of a psi effect than people without such a need. At randomly-chosen times Schlitz directed her calming attention at participants to try to reduce their skin conductance activity.  A significant calming influence was found for the participants that required it but not for those that did not (p = 0.01). This was interpreted as evidence of a needs-based role for psi.4

Schlitz tested the hypothesis that experimental subjects can use precognition to exploit short-term biases, creating a psychokinetic (PK) effect. She had experimental subjects try to influence the physiology of individuals located remotely from within a shielded room. Each session was divided into 12 runs, during which time the receiver’s electrodermal activity (EDA) was recorded and presented as feedback to the influencer. The influencer attempted to decrease the EDA of the distant participant for six runs and increase the EDA for the remaining six runs. One session was conducted under a new condition, in which the influencer had multiple opportunities to utilize intuitive data sorting by being allowed to start runs at her discretion. The effect sizes from the instructed runs were higher than those from the intuitive data sorting runs, indicating results more consistent with a force-like PK model than a precognition-like intuitive data sorting model.5

In 1991, Schlitz and her co-experimenter William Braud reviewed their DMILS program, describing thirteen years of research.  They draw attention to tight experimental controls that reduce the likelihood of such confounds as subtle cues, recording errors, expectancy effects, file drawer effects and subject and experimenter fraud. The range of targets included a person’s electrodermal activity, blood pressure and muscular activity, also the spatial orientation of fish, the activity of small mammals, and the rate of hemolysis of human red blood cells. The experiments are viewed as laboratory analogs of mental healing. The results were clear-cut across target domains: electrodermal activity (15 experiments, p = 0.000023), orientation of fish (4 experiments, p = 0.00005), locomotion of small animals (4 experiments, p = 0.00003), hemolysis of blood cells (4 experiments, p = 0.000025), ideomotor actions in humans (3 experiments, p =  0.0016). Across the program and 655 sessions the overall p value was 2.58 x 10-14, astronomically significant.  These effects are confirmed by numerous other researchers in a meta-analysis of human DMILS studies published in 2003.6

By 1997 several distant influence experiments had been conducted, including several with a negative outcome by Richard Wiseman, a sceptical psychologist at the University of Hertfordshire, UK.  To identify the cause of the disparity a joint project was organized in which two studies of the sense of being stared at were conducted at Wiseman’s laboratory. The only variable was the experimenter (Schlitz in the first and Wiseman in the second); the equipment, procedures and participant pool (sixteen subjects for each study) were identical. Schlitz obtained significant effects of intention on electrodermal activity (p = 0.04), Wiseman obtained insignificant results.7

Schlitz and colleagues investigated the effects of loving intention between couples. Thirty-six couples volunteered in 38 test sessions, one sending compassionate intention to the other (in 22 cases one of the pair was a cancer patient). Overall, there was a highly significant effect of intention on receivers’ skin conductance (p = 0.00009). Further analyses showed stronger effects among couples trained to give and receive loving intention.10

Schlitz has collaborated with Daryl Bem and others on a major project investigating the experimenter effect, using Bem’s implicit precognition protocols that investigate the effect of future information on the behaviour and responses of people in the present.11  Two rounds of experiments revealed some evidence for psi but less for an experimenter effect.

Schlitz has produced a film and book titled Death Makes Life Possible that examine how popular culture deals with the fear of death, giving interviews with scientists, mental health professionals, religious leaders and members of the public.12