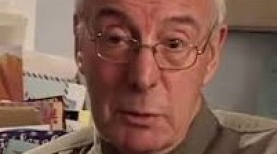 Montague Keen (1925-2004), a journalist and later a farmer, investigated crop circles and mediums, and was a leading member of the Society for Psychical Research.

Montague Keen was born in London on 7 February 1925, and raised as an orthodox Jew. He left school aged 16 after his family’s London home was bombed and his father killed during the Blitz, working as a journalist to help support his mother. He became a political correspondent based at the House of Commons, then went into agriculture, farming cattle in Suffolk for over thirty years and acting as a senior official in the National Farmers Union.1

He died on 15 January 2004, of a heart attack while speaking in defence of Rupert Sheldrake’s telepathy research during a public debate at the Royal Society of Arts in London.

Keen stated in an interview in the British magazine Searchlight

I was intrigued by claims made by friends on behalf of a young Irish clairvoyant, Tom Corbett, later among the most famous mediums in the UK. He gave readings to West End actors, many of whom were willing to tell me their stories, and sign statements, in return for being entertained to lunch in the House of Commons, where I was then working as a political journalist. This convinced me that, among the dross, there were nuggets of veridical predictions, some of which could not be written off as chance. I became, and remain, fascinated by the problem of time, as evidenced by cases of precognition.2

He joined the Society for Psychical Research in 1946, having been influenced by JW Dunne’s An Experiment with Time and books by JB Rhine about his experimental investigations of psi phenomena. He was appointed to the  organization’s governing council in 1992 and also chaired committees.

He was particularly interested in mediumship and survival, but his views were sometimes strongly opposed by sceptical commentators.3

Keen held reservations about the emphasis on experimentation in modern parapsychology. He stated in 2004:

I remain convinced that the SPR is a major powerhouse generating research. But I share the view of a great many members who are bored by the concentration on the laboratory experiments showing micro indications of some aspect of psi, when out there, in the field, there are dozens of exciting challenges, from ghosts and poltergeists to mediums and healers, to supplement the great neglected store of earlier research of which the modern generation of psychology-based experimenters appear largely ignorant.4

During the 1980s Keen investigated crop circles, serving for some years as the scientific adviser to the Centre for Crop Circle Studies. He wrote on the topic in published articles5 and a book,6 arguing that there was scientific evidence for some being paranormal rather than hoaxes.

Keen published an article in 2009 in New Scientist, defending claims regarding the efficacy of dowsing as a means to discover water sources. He cites research by Hans Dieter Betz, a professor of physics at the Ludwig Maximilians University in Munich, who documented successful activities by a German professional dowser Hans Schröter.7

Keen was one of the first psychical researchers to take an interest in a physical mediumship circle that met regularly in Scole, Suffolk, during the 1990s. He was joined by fellow SPR investigators Arthur Ellison and David Fontana. The three considered in their 450-page  report8  that at least some of the phenomena produced by the circle were genuine, but their investigation was criticized by some SPR colleagues.9

Keen expanded on his experiences at Scole in other documents.10

Between 1999 and 2000 Keen attended mediumistic sittings at the home of an SPR member in Ealing in west London, aimed at producing physical phenomena. The sittings were held in complete darkness apart from the use of luminous markers and LEDs on a video recorder. The attending ‘spirit controls’ were asked to move objects, take photographs and make vocal contact from around the room. Keen defended the veracity of the phenomena11 when it was brought into doubt by another attendee.12

Jacqueline Poole, a young London woman, was murdered on 11 February 1983. A few days later Christine Holohan contacted the police claiming to have received information about the incident from the spirit of the dead woman. Keen and Guy Playfair investigated these claims and concluded that they presented a genuine example of post-death contact.13 Their findings were disputed by sceptics Tony Youens and Adrian Shaw.14

1991 Scientific Evidence for the Crop Circle Phenomena (1992). London: Books for Dillons Only.

A pendulous communicator or a psychic stimulus (1998). Paranormal Review 5, 7-9.

The Scole Report (1999, with A. Ellison and D. Fontana). Proceedings of the Society for Psychical Research 58.

Round in Circles by J. Schnabel (1994). An overview of crop circles: Essay review. Journal of the Society for Psychical Research 59, 370-77.

Stanwick, M. (1998). A skeptic’s appraisal of ‘A skeptical view of parapsychology’ by Montague Keen. Journal of the Society for Psychical Research 62, 257-62.