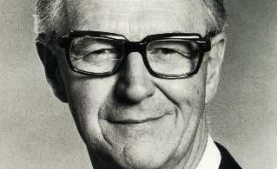 Arthur J Ellison (1920–2000), an electrical engineer, carried out research with psychics and served as president of the Society for Psychical Research.

Arthur Ellison was born on 15 January 1920 in Birmingham, UK. He studied engineering at London University and worked in industrial institutions as an electric design engineer. He was a senior lecturer at Queen Mary College, London, from 1958 to 1972, then professor and head of the department of engineering at City University, London, from 1972–85.

Posts in other organizations included director of Landspeed International in the UK and honorary professor of the National University of Engineering in Lima, Peru. He was a visiting professor at the Massachusetts Institute of Technology in 1959.

Ellison joined the SPR in 1955 and joined its Council in 1963, serving as president from 1976 to 1979 and from 1981 to 1984. He was also chairman of the Theosophical Research Centre. He directed an annual parapsychology course at Loughborough University.

Ellison became interested in psychical research in his early years after attending an exhibition of physical mediumship. His SPR colleague and obituarist David Fontana writes:

What he saw with the group overcame his initial doubts. While in deep trance the medium produced ectoplasm and Arthur saw numerous materializations, including some resembling well-known figures such as Sir Oliver Lodge … [O]ne of his most remarkable experiences with the group was to see, in a good red light and only a few inches away from him, a rose gradually form itself from a pink glow just above the medium’s empty palms. To the end of his life he maintained that even with all his electrical engineering knowledge he could see no possible cause of this glow, which he described as somewhat resembling the glow in a Crookes tube after an electrical discharge, and no normal explanation for the appearance of the rose.1

Ellison became increasingly interested in the investigation of paranormal phenomena in practical as well as philosophical areas. He considered laboratory work important, while preferring personally to devote his time to fieldwork and spontaneous cases.2 He also stressed the need to study one’s own psychic abilities as well as those in others, and his efforts to achieve altered states of consciousness through meditation led to out-of-body experiences and lucid dreaming. Fontana writes:

On the strength of his grasp of Eastern ideas and his knowledge of quantum physics he saw the reality of this world as very different from the images we construct of it with our senses, and regarded this reality as continuous with other dimensions of being accessible in mystical and postmortem states.3

Ellison cooperated with research into metal-bending by Uri Geller that was undertaken by John Hasted, head of experimental physics at Birkbeck College, London, in 1974.4 Observing a successful attempt by Geller to bend a Yale door key, he stated that the key

at no time left our sight from the moment it was removed from the key ring and placed on the typewriter frame to the time when the splined end had bent upwards. Our attention was not distracted and the key was not altered in position, accidentally or otherwise. We were all looking carefully for magician’s tricks and there were none. Everything occurred exactly as I have described. As a result of this personally witnessed experiment in clear unequivocal conditions I am able to state with confidence my view that Mr Geller has genuine psychic capability.5

Ellison undertook experiments with the psychic Matthew Manning in 1978 under the direction of Anita Gregory. He first sought unsuccessfully to discover whether Manning could move a protected pendulum by the power of his mind. He then asked Manning to try to perceive by clairvoyance the numbers produced by a random event generator, but this appeared to cause faults in the machine’s circuitry, as had happened when a similar experiment was attempted with Ingo Swann.6

The equipment was switched on and achieved a steady temperature well before the first experiment. Both experimenters (myself and D. Chapman) carefully checked it for accuracy, with success, all indications being correct. The Subject then did a run of 20 trials. The box indicated 8 successes. With some disquiet the experimenters themselves did another test run and found that they also scored 8. Careful cleaning of the microcircuit contacts again restored the functioning to normal.

Careful checks were made exactly as described above and the Subject did another run on the following day. Again he achieved an indication of 8 and again cleaning of the contacts was necessary.

Ellison notes that such experiments would not convince a sceptical observer, but that parapsychologists frequently experience similar results, adding:

It may be hypothesised that the unconscious machinery of the gifted psychic found it easier to bring about faults in the contacts by PK than to discover the numbers by clairvoyance. Sadly this could not be proved at the time and that experiment had to be left in this unsatisfactory state.7

Ellison was one of three senior researchers to investigate physical phenomena said to be produced by a mediumship circle at Scole, Suffolk, in the 1990s. Along with his colleagues David Fontana and Montague Keen he was convinced that the phenomena were genuine, stating that they could not be duplicated by normal means.8 He and Keen strongly defended this conclusion, objecting that critics of the investigation were unable to offer examples of deception and that the conditions were not favourable for tricks and illusions.9

Ellison published two books about parapsychology. The Reality of the Paranormal (1988), explored in a scientific manner psychic manifestations such as telepathy, clairvoyance, séances, apparitions, poltergeists and out-of-body experiences.10 Science and the Paranormal: Altered States of Reality (2002), published posthumously, reviewed the evidence for psi phenomena from his own experiences.11

Following Ellison’s death, his wife and a female friend independently reported that he had made made post-mortem communication with them. Fontana believed that he too had also been contacted by Ellison.12

Some recent experiments in psychic perceptivity (1962). Journal of the Society for Psychical Research 41, 355-65.

Correspondence: Exorcism in East London (1965). Journal of the Society for Psychical Research 43, 44-46.

Pendulum experiment in London experiments with Matthew Manning ed. by A. Gregory (1982). Proceedings of the Society for Psychical Research 56, 304-5.

Random event generator experiment in London experiments with Matthew Manning ed. A. Gregory (1982). Proceedings of the Society for Psychical Research 56, 305-7.

Presidential Address: Psychical research: After 100 years, what do we really know? (1982). Proceedings of the Society for Psychical Research 56, 384-98.

Ellison, A.J. (1982). Pendulum experiment in London experiments with Matthew Manning, ed. by A. Gregory Proceedings of the Society for Psychical Research 56, 304-5.