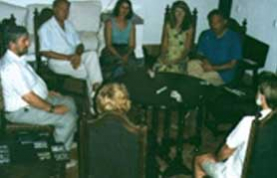 The Scole circle was a Norfolk-based group that held séances during the 1990s.  Its members claimed to have connected with spirits and to have observed paranormal phenomena of various kinds. The claims were endorsed by some investigators, but were hard to verify owing the lack of controls and the conditions of total darkness, and were disputed by other investigators.

Robin Foy (1943-), an ex-RAF pilot who worked in paper manufacturing, founded The Noah’s Ark Society for Physical Mediumship in April 1990. In the following year he and his second wife Sandra moved to the village of Scole in Norfolk. Foy was keen to promote spirit contact and physical phenomena independently of the Noah’s Ark Society.1  Tentative sessions that the Foys organised between 1991 and 1992 had limited results.

A more successful circle, calling itself the ‘New Spiritual Science Foundation’ and initially consisting of seven people, started operating fully in January 1993. Its members included Alan and Diana Bennett, local mediums who claimed to have seen spirits since they were children2; Bernette Head, a local post office employee; and Ken Britten, a technician at Stansted Hall, the headquarters of the Spiritualists’ National Union. The seventh member, Mimi Salisbury, was a businesswoman employed by a marine engineering company. Salisbury withdrew in February 1995 because of work commitments; Head and Britten also departed in the same year. The remainder, known as the ‘core group’, continued meeting until the circle was dissolved in November 1998.3 Once it had been decided that Alan and Diana Bennett would act as the trance mediums the phenomena increased, starting in earnest in October 1993’.4 From 1996 members of the public were invited to attend sessions for a £50 fee. At this time three members of the Society for Psychical Research (SPR) started to attend sittings in an investigative role.

The group met in a cellar in the Foys’ rented farmhouse. Sittings were held in complete darkness. The room was approximately 17 x 12 feet in size and carpeted. A fairly large table stood in the middle; there were two other small tables on which were placed crystal rocks and decorative glass domes. Next to Robin Foy stood another small table on which was placed a cassette player and tapes. The room also contained spare chairs, luminous markers, hanging bells, electric fittings and a cable across the ceiling with loops for microphones. Unopened films were often brought into the room.

In later years the group travelled abroad, holding sessions in the USA, Germany, Switzerland and Ibitha, the last at the invitation of Dr Hans Schaer.

The phenomena were said to be extensive in number and type. In his 2008 book Witnessing the Impossible Robin Foy lists 180 different manifestations that occurred on specified dates.5 They included:

Lighting effects were prominent at an early stage of the group’s development. The first edition of The Spiritual Scientist (the group’s official mouthpiece) mentioned the appearance during sessions of ‘spirit lights’, and this claim was repeated throughout its many editions and in other publications.6 The lights were mainly white, also occasionally red or green, and would move around the pitch black room at speed or hover in mid air. Sitters said the lights seemed to enter their bodies, creating a ‘light-headed sensation’, also that they ‘energized’ crystals and glass domes that were kept in the cellar.7

Claims were also made concerning the appearance of ‘materialized’ beings, in echo of the ectoplasmic phantoms frequently reported in late nineteenth and early twentieth century séances. These were initially referred to variously as ‘visible spirit beings, ‘spirit persons’ or ‘angels’ and in later stages as ‘personalities from far dimensions’ and ‘extra-terrestrials’. On one occasion ‘mini Madonna figurines…grew to about two feet tall, then “floated” around the room – on occasions trailing gossamer-like robes over the hands of the sitters’.8 The faces might possess human-like attributes (for instance, ‘nose, eyes, mouth and small moustache, plus dark hair’) or appear more alien, for instance being coloured blue or having ‘appendages similar to an elephant’s trunk’.9 In a 1994 session, a materialized spirit guide was said to have walked round the cellar talking to Sandra Foy in his own voice from a teleported body.10

The group also reported experiencing physical sensations. It was acknowledged that these might be caused by suggestion or by accidental normal contact with other group members. However they also described being ‘touched’ by the lights and being inexplicably handled, stroked or patted.11

The Scole group placed heavy emphasis on gaining photographic evidence of paranormal activity. From the outset its members claimed that blank films, taken into sessions unopened and later developed, showed meaningful images: these were described or reproduced in most issues of the Spiritual Scientist. Robin Foy formed a relationship with the Polaroid Company, which sponsored the group and provided it with films and equipment.12  The films included Polaroid 600 Plus, Polapan 35mm (ISO 125), Polagraph 35mm (ISO 400) and Polachrome 35mm (ISO 40).13 The images showed such things as indecipherable inscriptions, foreign languages, electrical diagrams, light anomalies and X-rays. 14 15

Despite the frequent pleas of investigators, video recordings were not normally made until later in the group’s existence, and even then the results were not made generally available.

One of the earliest incidents was the unexplained appearance in the room of a Churchill crown. Other ‘apports’ included a silver thimble, silver lockets, a gold medallion, a lady’s handkerchief, a 1923 French Franc Token, a penknife, a pearl tie pin, a silver charm, a silver sports medallion, a marcasite necklace, and an apparently brand new copy of the Daily Mail for 1 April 1944 reporting the ‘guilty’ verdict of Helen Duncan, a deceased materializing medium said to have been in contact with the group.16

Auditory phenomena was heard in the form of

At a sitting in Kusnacht, Germany, it was reported that a ‘jamming’ session (musical improvisation) was held with the spirits using a number of different instruments.17 ‘Energy voices’ were heard from an ‘angel’ that ‘darted about the room’, along with other ‘spirit voices.18 These phenomena were recorded despite objections on the part of the ‘spirits’.19

Numerous spirits/entities were said to converse through the mediums Alan and Diana Bennett, with voices appropriate to their identity. According to Robin Foy20 they identified themselves as:

The interactions appeared to be directed to a high degree by the discarnate team. Initially ‘John Paxton’, supposedly its senior member, explained that the new method of communication involved a blend of Earth, human and spiritual energy requiring a group effort.21 Each sitting was typically opened by Manu, who spoke through Diana Bennett, followed by Patrick and Raji, who spoke through Alan Bennett. Many of the ‘spirit’ utterances consisted of non-verifiable statements and general chatter. Technical information was given for the benefit of visitors who were also knowledgeable scientists, such as Dr Ernst Senkowski, Professor Archie Roy and Professor Arthur Ellison.

The communicators proved to be far from infallible. One visitor, a professional musician, heard that he might consider taking up music as a career.22 Another seemingly confused the spirits by making references to classical Latin and Greek literature, and speaking in contemporary foreign languages, which they were unprepared for.23

Professor Archie Roy, who at the time was president of the SPR, wished to form a joint investigatory body with the Spiritualist movement. This led in 1994 to the creation of PRISM (Psychical Research Involving Selected Mediums). It was through PRISM’s activities that the Scole Group came to the attention of investigators. Coincidentally, the ‘spirit team’ indicated its expectation that the group would work with ‘sympathetic scientists’.24

The following year, arrangements were made for three PRISM and SPR members - Montague Keen, Arthur Ellison and Ralph Noyes - to attend sessions. Noyes withdrew after only two sittings and his place was taken by David Fontana. In total there were thirty six sittings with the three main investigators (individually, in pairs or all together) between October 1995 and August 1997. The investigators said they witnessed every type of phenomena listed above, and considered that at least some of it provided evidence of paranormality or survival of death.

Keen, Ellison and Fontana were in the main convinced by what they observed. In one incident, Ellison said he watched a crystal seemingly materialise in front of him, and dissolve when he tried to grasp it.25 However, other SPR visitors were less impressed. They pointed out various shortcomings, notably the constraints imposed on the investigators with regard to the imposition of effective controls, which were always subject to veto by the ‘spirit entities’. The mediums were not searched before or after any of the sittings, which took place in complete darkness, nor were any restraints imposed on them, a departure from normal practice in the investigation of physical mediumship, in which the medium is closely held on each side, or bound with cords to prevent movement.  Most of the technical equipment was provided by the Scole Group, when ideally it should have been under the complete control of the investigators.

Claims of paranormality were alleged to be weaker than was claimed. Tony Cornell, perhaps the most acerbic critic, argued that the effect of moving lights could be successfully replicated by LEDs attached to rods or threads.26 The various photographic images said to have been created within sealed boxes, including obscure texts, were found to be available in public sources; for instance, a photograph said to be of Sir Arthur Conan Doyle might have been a manipulated copy of a well-known portrait. Further doubts were expressed by Donald West and Alan Gauld concerning the photographic evidence, while Maurice Grosse complained of having been excluded from sittings because of his stated belief that the phenomena might have a poltergeist source.27 Another SPR visitor was excluded after he expressed doubts as to the authenticity of the phenomena at his first sitting.28 A visit by Bob Morris and John Beloff produced very little phenomena, which the Scole group attributed to their presence, and the two were thenceforth forbidden from attending together.29

Responding to the doubts of their colleagues, the three main investigators attempted to tighten the controls, pressing for the introduction of infra-red photography or a level of light that would enable the phenomena to be observed directly and satisfy the need for scientific rigour.30 However their efforts were rebuffed by the group, and after a year of growing friction it finally terminated the investigation.

The 452-page report of the investigation - titled The Scole Report and authored by the three main investigators - occupied the entirety of the SPR Proceedings of November 1999. The Scole Group commented that ‘…the report very much favoured the view of the three main investigators that all the physical phenomena of the Scole Experimental Group that they had personally witnessed was genuine’ and further that ‘This was something of a first for the notoriously pessimistic Society wherever psychical psychic phenomena was concerned’.31 Dissenting views by other SPR attendees were published in appendices, to which the authors replied.

The Demise of the Circle

The group dissolved after a final sitting in November 1998, in response to instructions by the communicating ‘spirits’.  The Scole sittings spawned a number of books and articles, also an hour-long television documentary that shows footage of the investigations and simulations of sittings.32 Of particular interest is a section devoted to the group’s visit to Marcello Bacci in Italy, where it participated in his attempts to contact discarnate entities by radio. 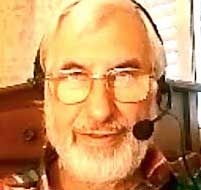