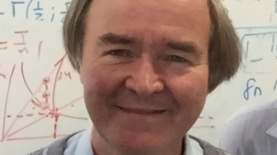 Bernard Carr (b 1949) is a cosmologist and author, Emeritus Professor of Mathematics and Astronomy at Queen Mary University of London. Carr has a long association with the Society for Psychical Research, serving as its president in 2000-2004. He is interested in the role of consciousness in physics and is working towards a new psycho-physical paradigm linking matter and mind, that accommodates both normal and paranormal mental experiences.

Bernard Carr was born in Brentwood, Essex on 23 May 1949. He was educated at St Chad’s (Lichfield), Harrow, and Trinity College, Cambridge, where he read mathematics. In 1976 he was awarded a PhD in cosmology, supervised by Stephen Hawking, and was elected a Fellow of Trinity College. In 1985 he moved to Queen Mary University of London, where he was later appointed Professor of Mathematics and Astronomy.

Carr is the author of  nearly three hundred scientific papers and two books, Quantum Black Holes (2013) and Universe or Multiverse? (2007). His monograph Cosmological Gravitational Waves won the 1985 Adams Prize. He has held visiting professorships at Kyoto University, Tokyo University and the Fermi National Accelerator Laboratory, and is a frequent visitor to other institutes in America and Canada.

Carr joined the Society for Psychical Research in 1972 and was elected president in 2000.  He is currently president of the Scientific and Medical Network (2021).

As he describes in a brief memoir, Carr’s interest in the paranormal was stimulated at the age of nine by his history teacher Manfred Cassirer, whose occasional references to psychical phenomena intrigued him.1 As a pupil at Harrow, aged fifteen, he read Bertrand Russell’s The ABC of Relativity and JW Dunne’s An Experiment with Time, which alerted him to the possibility of linking mental phenomena with physics. David Christie-Murray, a teacher at Harrow, played a key role in the development of his passion for the subject.

At Harrow, Carr conducted his first ESP experiment, persuading other pupils to record their dreams with a view to providing evidence of dream telepathy. He later became interested in reports of out-of-the-body experiences (OBEs) after reading The Projection of the Astral Body by Sylvan Muldoon and Hereward Carrington, which introduced the idea that an individual’s consciousness can leave the body and visit other locations, maybe even beyond the physical world.

One experiment attempted to detect the telepathic transmission of emotion, using hypnotized subjects and psychogalvanic skin response (a forerunner of modern DMILS experiments). The agent, an excellent hypnotic subject, had been trained to experience intense twenty-second bursts of emotion (happiness or hate) on a prearranged signal from the hypnotist (Cornell). The experiments appeared to give positive results.

After graduating, Carr considered studying for a PhD in parapsychology, but was dissuaded by the lack of career prospects and opted for cosmology instead, studying for his PhD with Stephen Hawking.  He continued at Cambridge for a further ten years, and in 1978 carried out an experiment to distinguish between telepathy and clairvoyance, using colour blind agents and Ishihara cards with numbers appearing differently to the colour-normal subjects. The results were significant, with telepathy appearing to dominate.2

Carr joined the council of the Society for Psychical Research in 1975 and undertook several roles: organizing study days and the annual conference; chairing the research activities committee; and serving as president from 2000-2004.

Having obtained a permanent academic post in 1985 he had less time to conduct experiments. However, he took part in spontaneous case investigations, notably the Enfield poltergeist and Scole mediumship circle.

In 1995 he succeeded Donald West, a fellow SPR council member, as secretary of the Perrott-Warrick fund, a regular disbursement of funds for parapsychological research.

Carr has given over twenty talks at SPR conferences and study days, as well as giving numerous lectures to the SPR and similar organizations. He has also appeared in media documentaries discussing psi phenomena and their relationship to physics.3

Carr’s main academic contribution to parapsychology has been on the theoretical front, where he has sought an extension of physics capable of accommodating psi. His approach is motivated by the notion that mental experiences – from ordinary dreams to apparitions, OBEs and near-death experiences – involve some form of higher dimensional space beyond the four dimensions described by classical physics. He states, ‘My limited experiences in psychical and spiritual realms have convinced me that there are higher levels of reality that go beyond the purely materialistic one, so one needs to go beyond that’.4

In 2019, Carr published a paper contesting claims by psychologists Arthur Reber and James Alcock that psi phenomena are incompatible with well-established laws of physics, and therefore cannot occur.

Carr accepts that psi cannot be explained in terms of current physics (relativity theory and quantum theory), but argues that it might be accommodated in an expanded physics that amalgamates these theories, pointing out that this is in any case a goal of mainstream physics. He writes:

One possible extension involves the idea that phenomenal space and physical space are amalgamated as part of a single 5-dimensional structure, the extra dimension being associated with mental (rather than physical) time. Such a model may be required to accommodate even normal mind, and incorporating further dimensions might then allow some paranormal phenomena. This could also relate to the extra dimensions invoked in some models of particle physics.5

In addition to those listed here, Carr wrote a regular column in the Paranormal Review during the course of his presidency.

An experiment to discriminate between telepathy and clairvoyance using Isihara cards and colour-blind agents (1983). Journal of the Society for Psychical Research 52, 31-44.

Rational perspectives on the paranormal: A review of the Perrott-Warrick conference held at Cambridge, 3-5 April 2000 (2002).  Journal of Scientific Exploration 16, 635-50.

Parapsychology as a bridge between science and religion (2007). Christian Parapsychologist 18, 134-48.

Worlds Apart? Can psychical research bridge the gulf between matter and the mind? (2008). Proceedings of the Society for Psychical Research 59, 1-96.

Tribute to Archie Roy: Earnest investigator of heavenly bodies and earth-bound spirits (2013). Journal of the Society for Psychical Research 77/3, 206-208.

Cosmology and Religion (2008). In Oxford Handbook of Religion and Science, ed. by P. Clayton and Z. Simpson, 139-155, Oxford University Press.

Higher dimensions of space and time and their implications for psi (2015). In Extrasensory Perception: Support, Skepticism and Science, Vol.2, ed. by E. May and S. Marwaha, 21-61, Greenwood Publishing.

Hyperspatial Models of Matter and Mind (2015). In Beyond Physicalism: Toward Reconciliation of Science and Spirituality, ed. by E. Kelly, A. Crabtree & P. Marshall, 227-273. Rowman & Littlefield.

Making Space and Time for Consciousness in Physics (2021). In Perspectives on Consciousness, ed. by P. Dennison, 319-50. Nova Science Publishers.

The Physics of Immortality: Modern Cosmology, God and the Resurrection of the Dead by F.I. Tipler (1997). Journal of the Society for Psychical Research 62, 78-80.

Interviews with Bernard Carr can be seen here and here.

Carr, B.J. (1983). An experiment to discriminate between telepathy and clairvoyance using Ishihara cards and colour-blind agents. Journal of the Society for Psychical Research 52, 31-44.