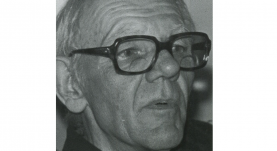 Ralph Noyes (1923–1998), a senior official in the Ministry of Defence, was in his later years a leading member of the Society for Psychical Research, involved in investigations of crop circles, mediumship and UFOs.

Ralph Noyes spent most of his childhood in the West Indies. He served in the RAF during World War II, mainly in North Africa and the Far East, then worked in the Air Ministry and Ministry of Defence until his retirement in 1977.

He was appointed honorary secretary of the Society for Psychical Research (SPR) from 1991 to 1997 and then a vice-president. He was a founding member both of the Centre for Crop Circle Studies (CCCS) and the project Psychical Research Involving Selected Mediums (PRISM).

Noyes first encountered paranormal matters in 1930s comic books, and later became intrigued by the material to be found in the SPR’s journals and proceedings. He was impressed with the ganzfeld research started by Charles Honorton and others and pursued at the Koestler Parapsychology Unit at Edinburgh University, also by the laboratory research of psychokinesis such as that carried out by Helmut Schmidt and Robert Jahn, which he believed could potentially lead to a scientific breakthrough.1

Noyes strongly believed that well attested events ‘occur for which there is no current understanding and which look like an outrage to common sense’.2 But he considered that a considerable shift in the current scientific paradigm would be required to explain them satisfactorily, also acknowledging the weakness of the effects, their unpredictability, and the lack of a theory to encompass them.

In his role as the secretary of the CCCS Noyes scrutinized all the available information about crop circles, from which he gained the ‘strong impression’ of a paranormal factor at work, commenting that the phenomenon at least enabled systematic study.3

From 1969 to 1972 Noyes was in charge of the government’s ‘Defence Secretariat 8’, part of whose remit was to investigate claims of UFO sightings. He claimed that there were ‘dozens of incidents’ that resisted explanation even after close technical, scientific and intelligence examination, and that he had personally witnessed phenomena that he could not rationalize. He wrote:

They are real. Something goes on around this planet endlessly. They are seen – sometimes over cities - usually in more rural areas. Sometimes seen by many witnesses – sometimes by a single witness. … Where (a UFO) differs and where it comes to resemble the ghost in psychical research is that some physical effects are left by it. We know that UFOs leave landing traces sometimes. We know that a close encounter witness can suffer a burn. There are several cases of that kind. … So we are dealing with something that is real, but very brief, very transient and doesn’t behave within the ordinary laws of Newtonian physics. It’s like an intruder from inter-dimensional space - or something from a surrounding space or realm.4

In 1985, he published Secret Property, a novel about UFO sightings presaging an alien invasion.

Noyes was involved with the PRISM project from its inception in 1994. It involved seven leading mediums at the Spiritualists’ National Union (SNU) and the same number of researchers affiliated with the SPR.  It was during this research that the Scole mediumship circle came to the SPR’s attention. Montague Keen was asked to investigate, initially joined by Noyes, who visited twice before being prevented by ill-health. Noyes concluded that the phenomena he experienced at Scole was authentic,5 but also stated that many of those who report psychic phenomena are ‘too ready to perceive marvels where none exist and to jump to superstitious conclusions about rather mundane events. It is the “magical imagination” far more than fraud which clutters our field’.6

The concept of psychosphere: A heuristic suggestion (1998). Journal of the Society for Psychical Research 62, 353-59.