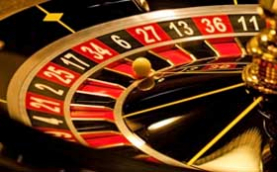 Experimental and anecdotal evidence suggests that psi can sometimes be used to advantage in gambling and financial speculation.

The Associative Remote Viewing (ARV) protocol is an extension of conventional remote viewing, and was developed as a means to predict outcomes in the stock market, lottery and horse racing.

In conventional remote viewing, a viewer attempts to describe a selected target. The description is given to an independent judge, who matches it against a pool of possible targets that includes the one used in the trial. If the judge matches the description to the selected target, this is considered a hit.

ARV involves the additional step of linking unrelated images to the targets in the pool. For example, a pink teddy bear might be associated with a rise in silver futures, while a rocking horse might stand for a fall; or else the horses in a race might each be assigned a visual image.

The target and image are not matched until after the remote viewing session has taken place. This protocol was initially developed as a means to guarantee that a remote viewing target remains unknown to everyone involved in the experiment - judges, viewers and interviewers. However, it also lends itself to the prediction of future events, since, at the time of viewing, the image itself need not be related to the eventual outcome. The viewer is usually provided with feedback regarding the correct image, which is the image that is associated with the actual outcome of the future event.1

The first recorded instance of ARV being used for financial gain is a horse race. In his book Opening to the Infinite, Stephan Schwartz recounts how he and Ed May (a fellow remote viewing researcher) applied the ARV protocol in an attempt to pick the winner of a race at Hollywood Park, Los Angeles. They each asked one remote viewer a set of relevant questions and used two separate sets of targets images, each image associated with an individual horse. Two judges reviewed the results of the sessions. A consensus predicted the winner would be horse number 6. The horse won the race.2

ARV has subsequently been used to successfully predict stock market fluctuations. By associating an object or image with a future outcome on the market, ARV sessions have elicited successful buy or sell options that have provided the opportunity for substantial financial gains.

In the early 1980s, Russell Targ and Keith Harary ran a series of ARV sessions on the movement of silvers futures. They initially experienced a successful run: ‘Our nine forecasts in the fall of 1982 were all correct, and we earned $120,000, which we divided with our investor’.3 However, an attempt to repeat the feat in the following year failed. Targ believes this was due to pressure to perform as many as two trials a week, which affected the feedback to the viewer, and also because the team had lost its ‘spiritual focus’ in the emphsis on making considerable financial gain.4

More recently, two papers report a successful series of experiments using modified versions of the ARV protocol, both of which resulted in financial gain.

In 2014, a paper published in the Journal of Scientific Exploration reported on a class exercise at the University of Colorado in which ten inexperienced remote viewers attempted to predict the movement up or down of the Dow Jones Industrial Average. Out of seven trials, seven correct guesses were made and relevant trades arranged. It was recorded that ‘on an initial investment of $10,000 we gained approximately $16,000’.5 This was despite a major loss on trial seven when, due to a timing error, the trade was not made as per the correct prediction.

In 2013, a paper published in the Journal of Parapsychology reported a 13-year experiment in which a (mainly automated) ARV process was used to speculate on the stock market. In summary:

One hundred eighty-one project questions resulted in actual futures trades where capital was risked. Of these, 60% of the trades were profitable, amounting to approximately $146,58.30.6

There is one report of a successful attempt to use ARV to predict the winning lotto numbers in a Californian lottery. The attempt was undertaken by James Spottiswoode, who devised a system in which 17 remote viewers performed viewings in an effort to predict which block of lottery number combinations would contain the winning combination. After four successful trials, he was ready to commit the $2249 required to cover the combinations in the block. The selection was successful, however the tickets could not be purchased in time.7

Databases of casino payouts and lottery statistics have been analyzed to discover any connection between environmental factors known to influence psi operation in laboratory-based experiments (for example, the correlation between the success in ESP experiments and geomagnetic activity8). This is based on the hypothesis that if psi is an innate ability in the general population, then there should be an indication that psi is operating when people have a vested interest in the outcomes.

This is particularly relevant to games in casinos and to lotteries, where the hope of big monetary wins is a major motivator. Both activities also have the benefit of providing parapsychologists with large databases of results where there is reduced danger of other influences affecting the outcomes.

A study undertaken by Dean Radin and Jannine Rebman used four years of gaming data recorded at a Las Vegas casino. The study hypothesized that if psi is in operation then there should be correlations between casino payout percentages and environmental factors that are thought to effect psi performance. They found that: ‘Nearly significant correlations were observed for lunar cycle and geomagnetic field, and significant correlations were observed for tidal forces.’ 9

Similarly, a study of lottery outcomes in France and the former USSR found a correlation between geomagnetic activity and the prediction of lottery numbers. The study concluded that:

c) The true predictions density correlates significantly with geomagnetic activity on the draw days but not on the days before and after (p < 0.005).10

There is anecdotal evidence that some people have experienced ‘just knowing’ the outcome of horse races yet to take place.

For instance, a reader of the Paranormal Review related how he had twice picked the winner of the Derby. He recounts how the first time it happened he was perusing the list of horse names in the newspaper when ‘one horse seemed to fix my gaze, and I had a very strange, pleasant feeling, as one might experience on suddenly remembering something very important or recognizing someone close or dear’.11 He felt there was absolutely no doubt that the horse would win the Derby.

It turned out to be the winning horse; however, he did not place a bet, ‘thinking that if my experience should prove to be well-founded, I was being given a special gift which it would be churlish of me to commercialise’.12

Anecdotal evidence has been tested in the laboratory. David Spark, who believed he could successfully predict the outcome of horse races, requested to be tested for psychic abilities. In response, researchers Susan Blackmore and Nicholas Rose devised trials using a computer-run horse race. In some of the later trials, Spark bet toy money on his selections. They found that:

Overall, 210 trails were run in these five experiments with 21 hits (exactly chance expectation). In one experiment, DS correctly predicted the distribution of places, but this was not replicated in a second attempt. In the experiments with toy money he did make a small profit.13

Psi as a Means to Finance Research

Parapsychologists are divided regarding the potential to use psi order to raise funds for research. For some, the impact of such successes in the use of psi for financial gain as have been recorded is outweighed by concerns that it obscures the scientific activities required to understand psi. There are also concerns that any early success may not long be sustained.

This pessimistic view has recently been challenged by Dick Bierman, of the University of Amsterdam. In an assessment of successful ARV experiments and anecdotes, Bierman found a mean scoring rate of 65.5% across 17 studies. He has developed an automated ARV system to help predict results of roulette wheels to this end.14

The use of psi to raise funds would also address a common sceptical view that, if psi existed, parapsychologists would naturally want to profit from it for this purpose.15