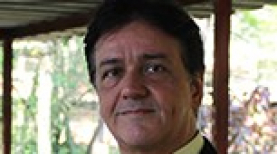 Wellington Zangari is a Brazilian psychologist whose research interests include anomalistic psychology, hypnosis and altered states of consciousness.

His research focuses on areas of social psychology, psychology of religion, anomalistic psychology, hypnosis and altered states of consciousness, and the philosophy of mind.

Since 2008, Zangari has guided studies in the areas of anomalistic psychology, psychology of religion, cognitive science of religion and social psychology of belief at the University of São Paulo. Some two dozen researchers have obtained their masters and doctorate degrees under his supervision. Currently, another twelve researchers are under his guidance.  Former students of Zangari and Machado are currently supervising researchers at other universities in Brazil, effectively seeding a third generation of academic researchers studying anomalous beliefs and experiences. The influence of Zangari and Machado in this regard has been compared with that of American parapsychologist Robert Morris, who as chair of the Koestler Unit at the University of Edinburgh similarly seeded a new generation of psi researchers in a number of British universities (the so-called ‘Bob Morris effect’).

Zangari has contributed to psychosocial understanding of the phenomenon of the incorporation of mediums from Umbanda, a Brazilian mediumistic and syncretic religion. His studies, some carried out in collaboration with colleagues, include the question of identity in mediumship1 of the projective and curative functions of mediumship,2 anomalous experiences in mediumship, and other psychosocial aspects.3 In his post-doctoral study he replicated the ‘precognitive habituation’ experimental procedure developed by Daryl J Bem in 52 mediums from Umbanda, without obtaining favourable results for psi.4

Zangari has developed a description model  of the successive and interdependent phases through which mediums develop their mediumship:

In a 2018 article, Zangari and Goldberg try to connect the work of Brazilian psychologist Wilton de Azevedo to Lacanian theory, developed by French psychoanalyst Jacques Lacan, who devoted his career encouraging a return to early Freudian psychoanalysis. It offers a conceptual approximation between the two seemingly disparate psychological approaches and suggests avenues for further work.6

In this study, based on interviews with people claiming to have had contacts with aliens, Zangari and Martins try to illuminate the sociological processes underlying exceptional experiences. They note that throughout history such reports have been subsumed under the general heading ‘paranormal’ and, since they are contrary to the prevailing worldview, most experiencers are stigmatized when they try to recount them. The degree of closed-mindedness in society is explored in Zangari and Martins’s study, in which they investigate psychosocial variables that mediate the relation between beliefs/anomalous experiences and culture in the Brazilian context. Using the Theory of Attribution of Causality, Zangari and Martins found that the experiences were formed by means of a complex interplay of scientific, esoteric and traditional religious concepts.7

In a special edition of the Journal of Parapsychology, Zangari and Machado sketch a future for parapsychology in Brazil with reference to the contemporary scene and its history. They explain that the term parapsychology in Brazil is associated with traditional healers and spiritual teachers rather than with academic activity, a cause of antipathy in the Brazilian university system. In recent times the rise of anomalistic psychology has made the study of paranormal topics academically respectable, with an emphasis on explaining ostensibly paranormal phenomena by means of psychological processes rather than explanations based on psi. This allows psi experiences and other anomalous experiences to be discussed in the academic context, while also encouraging students to experimentally investigate their ontological aspects. Zangari and Machado note that most of the current masters and doctoral students at USP plan to continue in the field once they have graduated, and accordingly predict widespread growth of anomalistic psychology throughout Brazil, with programs that also incorporate Western style psi research. 8 9

With Machado, Zangari works at the Inter Psi - Laboratory of Psychosocial Studies “Belief, Subjectivity, Culture & Health” at the University of São Paulo. This is an active research centre with over a dozen active academics. The laboratory maintains five study groups in the areas of psychology of religion, anomalistic psychology, cognitive science of religion, psychology of magic art, methodology of study in social psychology of belief, and identity. About eighty people actively participate in these groups, which Zangari considers incubators of researchers.

Areas of research include

Inter Psi also offers courses at undergraduate and postgraduate level  that offer an introduction to anomalistic psychology, hypnosis and altered states of consciousness, and the psychology of religion.10

Zangari took part in a large group investigation of the validity of a standard measurement of transliminality (the ease with which information enters consciousness from the internal and external environment) across different cultures. Zangari and co-workers administered a Portuguese version of the Revised Transliminality Scale (RTS) to an online sample of 341 university students, starting with those at the Institute of Psychology of the University of São Paulo. It was found that the Brazilian measures correlated nearly perfectly with estimates derived from earlier research. A few differences related to age and sex were obtained, but these did not appreciably affect the estimates of overall transliminality levels. Zangari and co-authors concluded that the research supported the robustness of current transliminality measurements, serving as a guide to advance further cross-cultural research into understanding transliminality.11

Zangari and co-authors composed a practical Portuguese-language guide, in question-and-answer format, regarding the relationship between psychology and religion, including the historical aspects of religious experiences. The questions were based on those raised by people seeking understanding of their anomalous experiences.

Because such experiences tend to be interpreted in a religious sense, the aim was to help psychologists distinguish between religiosity and spirituality, which refers to what gives meaning to life rather than the spiritual world and does not necessarily relate to religious motivation or life purpose. It was further hoped that an understanding of how these themes are interwoven might enhance professional practice in psychology.12

In a study of religious attitudes about science, Zangari and colleagues investigated followers of Brazilian religious groups, probing their scientific sentiments and potential influences such as family and school education. They ran a quantitative cross-sectional study using the Scale of Belief in Science and an original questionnaire based on responses given by 309 adherents of different religious affiliations. Results displayed a greater propensity for disbelief in science than is found in the general population, despite a recognition of the importance of science for society and a consensus that there is no irreconcilable conflict between science and religion. More exhaustive analyses revealed significant differences between religious affiliations in their levels of affinity towards science.13

In the first experiment, the influence of a group’s distant mental influence was directed towards isolated participants 200 meters away. The second experiment investigated the ability of Umbanda mediums to direct their healing intentions from São Paulo, Brazil towards volunteers who were monitored two months earlier in Las Vegas (this was a retroactive healing study probing time displacement healing effects rather than in real time).  Overall results indicated marginally significant effects of influence (p = 0.053) in the first experiment and significant effects of retroactive mental influence in the second experiment (p = 0.013).14