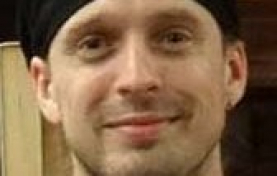 David Saunders is a psychologist and psi researcher at the University of Northampton’s Exceptional Experiences and Consciousness Studies Group, with research interests in dreams, survival and the neuropsychology of anomalous experiences.

David Saunders is a senior lecturer and deputy subject leader in psychology at the University of Northampton working within the Exceptional Experiences and Consciousness Studies (EECS) Group. He also sits on the survival research committee of the Society for Psychical Research.  His research interests include lucid dreaming, the function of dreams, the psi and survival hypotheses, motor-learning, mental-imagery, consciousness and cognitive neuropsychology, and the neuropsychology of anomalous experiences.

With veteran parapsychologist Stanley Krippner, Saunders tested the age-old belief that darkness fosters paranormal ability, probing the influence of lighting conditions on remote viewing ability. Seven remote viewers from the Energy Medicine University in Sausalito, California, contributed 19 sessions under both illumination and dark conditions. Each session consisted of remote viewing a picture slide. At the end of each session participants were presented with either the target or a decoy and asked to choose the target.  Testing in the dark resulted in higher scoring than under illumination, but the difference failed to reach statistical significance. When the raw score data was treated according to an established statistical method,1 independent judging was more successful at matching session transcripts to targets than remote viewers at choosing a target versus the decoy (p = 0.001). Additionally, numinosity – the emotional impact of a target – was associated with ESP scoring (p = 0.048).2

Saunders has collaborated in an investigation of floatation tanks as a vehicle for enhancing ESP expression. In a pilot study with Dr Callum Cooper and Dr Glenn Hitchman, researchers acted as either ‘receiver’ – the person who receives telepathic information, or ‘sender’ – the person who transmits telepathic information – during 12 sessions using video clips as targets. Receivers attempted to judge their own mentation against the target and decoy clips in a blinded fashion. At the end of the experiment, the mentation reports were given to an independent judge to match the targets.

Both receiver and judge scored well within chance. This was expected, given the low number of trials, but the main aim was to re-explore the potential of the tanks, following a similar 1980 study by D Scott Rogo,3 and highlight ethical and methodological issues in preparation for a major research program. Much was learned about the practicalities of using floatation tanks, and the appearance of several close correspondences provided motivation for a larger trial involving a greater number of participants.4

In a study reported in 2017, Saunders was part of a team investigating the nature of the relationship between personality variables and lucid dreams from psychological testing of volunteers enrolled in a 12 week lucid dreaming induction program.  Two theories were tested that attempt to explain the association between personality and lucid dreaming: the predispositional, in which personality traits influence propensity to lucid dream, and experiential, in which the experience of lucid dreaming influences personality.  The authors found no personality differences, using three measures, between self-professed lucid dreamers and non-lucid dreamers at the beginning of the program; but they did find a significant increase in one personality variable, field independence – a cognitive style in which the individual relies more on internal referents (bodily sensations) than on external referents (environmental cues) – for those who could learn to lucid dream. This finding gives some support to the experiential hypothesis.5

Saunders has also investigated the impact of lucid dreaming on fine motor skills, comparing a lucid and non-lucid dreaming sample on performance across three general motor-skill tasks (balance, hand-eye coordination and reaction time). Over a period of four weeks all participants engaged in physical practice of these tasks using novel apparatus. In addition to physical practice, lucid dreamers were instructed to practise these tasks within their lucid dreams whenever they occurred. The results were non-significant; however, reaction time and balance were both indicative of an effect. This study has yet to be published via peer-review.6

In a 2016 publication, Saunders and Professor Chris Roe report a meta-analysis of 34 studies carried out during the period 1966–2016 that measured either lucid dreaming prevalence over a lifetime or the frequency of recurrent lucid dreams over a short period of time. Overall, they found that lucid dreaming was quite common, with 55% of the population having experienced at least one. Twenty-three percent of those lucid dreamers reported recurrent dreaming episodes with a frequency of once a week or greater.7

In a 2014 presentation Saunders discusses the association between dreaming and paranormal experiences.  He refers to surveys that suggest as many as 65% of reported spontaneous ESP cases have occurred during dream experiences. He explores the robust ESP-dreaming relationship by referencing both laboratory research and survey data.  The potential for employing lucid dreaming in future dream ESP studies is discussed.8

In 2019 Saunders received a Perrott-Warrick grant for a dream ESP study in which he is exploring lucid dreams and their potential for precognitive content.

Spiritualism has been receptive to some degree of scientific scrutiny since its inception in the mid-nineteenth century.  To promote further integration of the scientific approach into spiritualism, J Arthur Findlay bequeathed Stansted Hall to the Spiritualist National Union (SNU) in 1954.  This was named ‘The Arthur Findlay College’ and in the ensuing years has provided a venue for promoting open investigation of mediumship. Since 2013 several week-long workshops aimed at promoting dialogue between scientists and mediums has led to the establishment of a dedicated laboratory space on the grounds of the college. In a presentation given at the 2019 Parapsychological Convention,9 Saunders details these advances and describes a planned replication, with Chris Roe and Rachel Evenden, of a test of mediumship conducted at the Institute of Noetic Sciences.10

Rogo, D.S. (1980). The use of the sensory deprivation tank to facilitate psi-mediated imagery: An exploratory study. Research Letter [Parapsychology Laboratory, University of Utrecht] 10, 43-47.