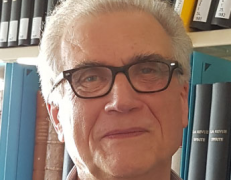 Eberhard Bauer is a German psychologist and parapsychologist, whose research interests include biographical, cultural and historical aspects of spiritism, occultism and psychical research in Germany.

Eberhard Bauer, born 1944 in Pforzheim, Germany, studied history and philosophy at the University of Tübingen and graduated in psychology from the University of Freiburg. He has been associated with the Freiburg ‘Institut für Grenzgebiete der Psychologie und Psychohygiene’ (IGPP) (Institute for Border Areas of Psychology and Mental Hygiene) since 1970. In 1972 he became scientific assistant to Professor Hans Bender (1907-1991), the leading figure in academic parapsychology in Germany after World War II. Bender founded the Institute and held the chair for ‘psychology and border areas of psychology’ at Freiburg University from 1954 until 1975.

Bauer is a member of the Institute’s Council and one of its Research Coordinators, co-editor of the journal Zeitschrift für Parapsychologie und Grenzgebiete der Psychologie and the IGPP book series Grenzüberschreitungen (Crossing Borders). For many years he has taught courses and seminars on psi research and anomalistic psychology in Freiburg University’s psychology department. Together with his IGPP team he offers information, counselling and psychotherapy for people reporting exceptional or anomalous experiences (including field work in RSPK cases).

Among Bauer’s special research interests are biographical, cultural and historical aspects of spiritism, occultism and psychical research in Germany since the nineteenth century until today.

Bauer’s own assessment of his career can be found in Rosemarie Pilkington’s Men and Women of Parapsychology, Personal Reflections (volume 2).1

By 1978 the free-response paradigm in parapsychology was becoming well established. This is reflected in Bauer’s description of four important publications that year, by parapsychologist Louisa Rhine, psychiatrist Montague Ullman and psychologist Stanley Krippner. Their general point was that parapsychology is in a ‘proto-scientific’ stage, characterized by a lack of a repeatable experiment that gives consistent and reproducible results, a consequence of poor theoretical development.2 These characterizations may now be compared with a more favourable summary published by Etzel Cardena in the American Psychologist in 2019, which describes several classes of psi research that exhibit robust statistical repeatability.3

In a 1984 paper, Bauer describes the impact of Mesmerism on psychical research.4  Anton Mesmer, who graduated in medicine in 1764,  played a key role in the history of parapsychology, especially in relation to the idea of thought transference (telepathy, as it later became known). He believed that the planets affected human beings through an influence similar to magnetism. Mesmerism, with its lurid magical connotations, evolved into today’s hypnotism, in which experiences of telepathic communication are still commonly reported. This relationship is also seen experimentally.5

In a 1984 article, Bauer reviews controversies in parapsychology with reference to the credentials of parapsychologists and their critics. He suggests that the boundaries of the field should extend beyond ESP and psychokinesis, and the validity of experimental and statistical procedures in psi research. Criticisms of ESP research based on questions of replicability, selective reporting and the possibility of fraud are described.6 Since 1984 the accumulated evidence continues to expand,7 despite the increase of security and precautions against fraud and selective reporting.8

In a 1987 article, Bauer describes the history of the Institute for Frontier Areas of Psychology and Psychohygiene (IGPP) from 1950 to 1987. This includes the integration of the chair for border areas of psychology into the department of psychology and border areas of psychology at the University of Freiburg. The article also describes the foundation of the Scientific Society for the Promotion of Parapsychology in 1981 and the establishment and chronology of the Journal of Parapsychology and Frontier Areas of Psychology. Research during this period spanned spontaneous reports and haunted phenomena as well as qualitative and quantitative experiments.9 Since 1987 the IGPP has developed a comprehensive program of physiological testing of psi effects, for example the presentiment response and remote influence, along with more conventional psychological processes such as false memory syndrome.10

A 2012 book chapter offers an overview of counselling activities at the Freiburg Institut für Grenzgebiete der Psychologie und Psychohygiene (IGPP). The IGPP was founded by Hans Bender in 1950 with a remit to provide information, counselling and education in relation to paranormal, supernatural, magical and occult phenomena – combined under the umbrella term of ‘mental hygiene’. Bauer describes the history and evolution of the counselling process which developed in concert with increasing documentation of exceptional experiences.11

Counselling and the Occult

In 1988, Bauer conducted a survey of 906 psychosocial counselling centres in Germany on the subject of ‘occultism/occult practices’ among adolescents. Just over half of respondents said they engaged in occult practices. A more detailed analysis revealed the prevalence of psychomotor automatisms, spiritistic meetings, membership of satanic cults and magical practices. Bauer makes a plea for further empirical studies on the individual and social-psychological effects of occult activity.12

A 1991 paper by Bauer and von Lucadou takes issue with the claim repeated by Mario Bunge, a Germany psychologist and sceptic, that

parapsychology is a pseudoscience.  Against Bunge’s assertion that parapsychology should be treated in the same way as the occult. Bauer affirms that the anomalies investigated by parapsychologists have been empirically validated and show statistical replicability, also that their methods are the same as those used in the social sciences, and sometimes have greater rigour – neither of which is true with regard to the claims of occultists.  The authors add that it is by no means certain that paranormal effects contradict natural laws.13

In a 1991 article, Bauer argues that psi anomalies can be successfully investigated as a subject of parapsychological research using the established methods of the social and natural sciences, within the materialist paradigm. He argues that the legitimacy of parapsychology does not depend on experimental verification of psychic phenomena, but is a discipline in its own right. He refers to psychokinesis experiments with random number generators (RNGs) and ganzfeld telepathy experiments, which have obtained impressive meta-analytic outcomes, confirming the statistical robustness of the effects.14 (Some thirty years later, the evidence for both of these effects has become considerably stronger.15)

In a 2012 special issue of the Journal of Parapsychology, leading parapsychologists predict where there field will be in 2037. Bauer asserts that it is guaranteed to continue in some form because people will always experience anomalous happenings that demand investigation or counselling. There will be increasing interest in the sociological basis of parapsychology and the occult, and progress will  continue to be measured by the yardstick of the social sciences rather than the hard sciences.16 However, academic scepticism will remain a potent obstacle to mainstream acceptance, he believes.17

Bauer, E. (1984). Criticism and controversies in parapsychology - An overview. European Journal of Parapsychology 5, 141-165.

Bauer, E., Lay, B. & Mischo, J. (1988). A survey of psycho-social counseling centers on the subject of "occult practices among young people". Journal of Parapsychology and Frontier Areas of Psychology 33-45.

Honorton, C.,  Krippner, S. (1969). Hypnosis and ESP performance: A review of the experimental literature. Journal of the American Society for Psychical Research 63, 214-252.