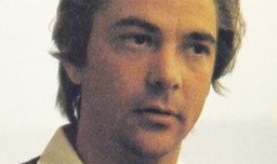 English-born Malcolm Bessent (1944-1997) participated as a subject in successful dream precognition experiments carried out in the US.

Malcolm Bessent was born in India in 1944 to English parents.  He claimed to have had precognitive experiences from early childhood. Following a chance meeting with Douglas Johnson, a medium, he decided to try to develop this skill, initially at the College of Psychic Studies in London.1

Returning to London, Bessent worked as a photographer; a connoisseur of high-performance cars, he also ran a showroom in Belgravia. He continued to exhibit his psychic powers, taking part in two episodes of the television series The Paranormal World of Paul McKenna. 2 He died in 1997 after a short illness.

When Bessent first arrived in New York he sent certain recent dreams to the Central Premonitions Registry, where they were logged by the director Robert Nelson. One example dated 7 December 1969 read:

A Greek tanker, black in colour, will be involved in a disaster having international significance within four to six months’ time. Onassis connected – perhaps the danger is symbolic, but I feel the ship may represent him personally.

In February 1970, the Arrow, an Onassis-owned oil tanker, was wrecked off Nova Scotia, spilling its cargo of oil and causing an international incident.3

In 1971, at the suggestion of Jerry Garcia, a founding member of the Grateful Dead rock band, Krippner, Ullman and Honorton conducted a mass telepathy experiment with Bessent.4 While Bessent slept in the Maimonides Center dream laboratory, some two thousand audience members attending a Grateful Dead concert 45 miles away in New York’s Capitol Theatre were shown an art image on a screen and asked to try to transmit it to him telepathically. The experiment was conducted over six nights, each time with a different image.

A second potential receiver was Felica Parise (who slept in her own bed), but the audience was only informed about Bessent.  Dream transcripts were obtained from both subjects and matched to the images by independent judges. Four out of six matches with Bessent’s dreams were obtained, where one match would be expected by chance. Only one match was obtained to Parise’s dreams, at chance level – as expected, since the audience had not been asked to try to transmit images to her.

Bessent went on to participate in a series of eight experiments in precognition, carried out by the same team in the dream laboratory at New York’s Maimonides Medical Centre.5 He described the content of his dreams on eight (non-consecutive) nights, then was exposed to a multi-media experience, arranged by an experimenter who had no contact with Bessent during this time and based on the target image chosen by means of a randomly selected word. Three judges, working blind and independently, attempted to match descriptions of the experience to the eight dream transcripts. Out of the eight experiments, five were direct hits (p = 00018).

In one example, the word ‘corridor’ prompted the choice of Van Gogh’s painting ‘The Corridor of St Paul Hospital’ as the target image. On the morning after recording Bessent’s night-time dream content, he was made to simulate the experience of a mental patient walking down a corridor on his way for treatment. He had dreamed earlier of a large concrete building from which a patient was trying to escape; she was wearing a white coat, like a doctor’s, and got as far as the arch (see figure 1). 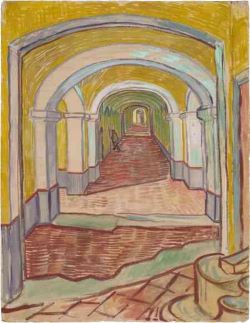 In another instance, the randomly-chosen word ‘kitchen’ prompted the choice as target image the painting titled ‘Fruit and Flowers’ by Cikovsky. The ensuing multi-media experience included Bessent washing a piece of fruit from a bowl, smelling and then eating it6 (see figure 2.) 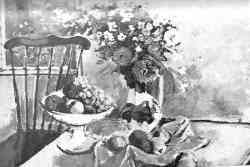 Krippner, Ullmann and Honorton carried out a second series of experiments with Bessent.7 Here the multi-media experiences acted directly as targets and were designed beforehand, to eliminate the possibility that the experimenter responsible for creating them might have become aware of Bessent’s dreams by means of ESP. In a further modification, as well as dreaming precognitively, on alternate nights Bessent was asked to dream about experiences to which he had already been exposed. As expected, he dreamed about future experiences to a statistically significant degree, with five hits out of eight (p = 0012), but not about past experiences, where he scored no hits.

In one example, references in his dream transcripts to armed guards, politics, protests, soldiers, National Guardsmen, demonstrations and authority-type figures closely matched a multi-media experience based on the randomly-chosen word ‘police’.  Similarly, an experience based on the word ‘birds’, with images of birds on land and water and in the sky, was preceded by dreams dominated by the colour blue and birds swimming on a lake (‘I just have a feeling that the next target material will be about birds.’)8

In 1987, Bessent collaborated with Charles Honorton at his laboratory in Princeton, attempting to identify target images from a pack of four cards, both in real-time and precognitively.9 This involved an automated ESP testing program that had been designed as a hybrid between forced-choice and free-response types. A thousand trials were carried out. As predicted, Bessent performed better in precognitive mode, at a statistically significant level, than in real-time clairvoyant mode, which was at chance level. Rival hypotheses including sensory cues, faulty randomization, data-handling errors, data-selection bias, multiple analysis and deception were assessed and found to be inadequate.

Honorton pointed out that this was Bessent’s fourth precognition experiment, each involving a different methodology and each yielding a statistically significant outcome.  The combined result is highly significant (z = 5.47, p = 2.26 x 108).

Further studies of Bessent were carried out by Warren, McDonough and Don (1992) and Palmer (1996). A study in precognitive dreaming with references to Bessent can be found in Schredl, Gotz and Ehrhardt-Knutsen (2010).

Shortly before his death in 1997, Bessent took part in two episodes of the British television programme The Paranormal World of Paul McKenna, demonstrating precognitive dreaming and healing.10 Producer Michael Johnstone commented, ‘Some people would fall into a deep sleep within minutes, injured legs would twitch while he held his hand over the person’s head, swollen knees would shrink and cool, stiff necks would loosen up most of this happening without physical contact and certainly nothing that could be described as manipulation.’11

Honorton, C. (1987). Precognition and real-time ESP performance in a computer task with an exceptional subject. Journal of Parapsychology 51, 291-320.

Krippner, S., Honorton, C., & Ullman, M. (1973). An experiment in dream telepathy with The Grateful Dead. Journal of the American Society of Psychosomatic Dentistry and Medicine 20, 9-17.