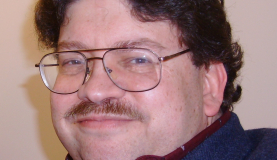 Carlos S Alvarado (1955–2021) was a researcher, author and educator in the field of parapsychology. His writings focused in particular on the history of early psychical research in the late nineteenth and early twentieth centuries. He also wrote on spontaneous anomalous experiences, notably the out-of-body experience, and explored the relationship between psychology and parapsychological phenomena.

Carlos Salvador Alvarado was born in Boston, Massachusetts, on 9 March 1955. His Puerto Rican father was pursuing a PhD in urban planning at Harvard University, which he never completed because he was called back to the island to take up a government position there. Carlos grew up in Puerto Rico and received his BA in psychology from the University of Puerto Rico in 1978, then returned to the United States mainland. He was awarded an MSc in parapsychology by John F Kennedy University (Pleasant Hill, California) in 1981, an MA in history by Duke University (Durham, North Carolina) in 1989, and a PhD in psychology by the University of Edinburgh in 1997.1

Alvarado contributed significantly towards promoting education in parapsychology, collaborating with his wife Nancy L Zingrone. He wrote extensively on the histories of psychology, psychiatry, and psychical research. Other interests included out-of-body experiences and other anomalous phenomena. His research was funded by the BIAL Foundation, the Perrott-Warrick Fund in Cambridge, the Society for Psychical Research (SPR) and other organizations.

In addition to his many print publications, Alvarado contributed twenty articles to the Psi Encyclopedia.2 For information on his professional positions and awards, see the section Professional Posts and Honours, below.

Alvarado was stricken with glioblastoma, an aggressive brain cancer, late in 2020 and died 16 July 2021 at his home in Carrboro, North Carolina, aged 66.

Alvarado and Zingrone contributed to education in parapsychology and were involved in online teaching activities related to the field. These activities included a dedicated YouTube channel, Parapsychology Online; a virtual research and education institute that hosts online classrooms on the AZIRE Moodle3 and other online learning management systems; together with the AZIRE Library and Learning Center in the virtual world Second Life.4 Since 2015, Parapsychology Online has hosted the ParaMOOC,5 a series of high quality online webinars by leading experts in the field of parapsychology (it is free to join and its recordings are freely available).6

Alvarado’s interest in writing about the old literature had two aspects: to inform current workers/readers about a forgotten past, giving perspective, and to help generate ideas and hypotheses for research and evaluate phenomena and theoretical issues.7

Alvarado  also underlined, in places such as the journal History of Psychiatry, the contribution of psychical research to the development of ideas in psychology and psychiatry, such as dissociation and the unconscious mind.8

With Everton Maraldi, Alvarado reviewed writings in psychical research by Swiss psychologist Théodore Flournoy, in particular his classic investigation of the trance medium Hélène Smith. Their detailed discussion can be found in History of Psychiatry.9 In addition to mental mediumship, Flournoy investigated physical mediums and analysed the research literature of telepathy and precognition.10

Eusapia Palladino, an Italian physical medium, was investigated by reputable scientists in many European countries towards the end of the nineteenth century. She demonstrated a wide repertoire of phenomena under good observing conditions, although her reputation is coloured by a propensity to cheat when opportunity allowed. In a 1993 paper, Alvarado looked beyond Palladino’s importance to researchers, presenting her as an exemplar of the way a gifted subject, through her characteristics and behaviours such as acts of fraud, and verbal statements about the nature of the phenomena, shaped public perceptions of mediumship.11

Alvarado reviewed a memoir article penned by Palladino during a visit to New York in 1910, speculating that she hoped it would improve her reputation in a country that had previously demonstrated scepticism. He compared certain of the article’s details to the contemporaneous impressions of others, finding agreement in the genuineness of at least some of the phenomena.12

By 1982, experimental OBE research had become established in parapsychology. Alvarado reviewed thirteen studies, in six of which he found significant evidence of ESP perception (one study contained extremely significant effects (p = 0.000025), although it was of suspect quality).15 Some of the studies tested psychokinetic effects using sensitive electronic detectors and targets that in one instance included a pet kitten – approaches that both gave significant evidence of PK. However, despite some striking successes, the evidence surveyed in this report was found to be weak. Alvarado concluded that OBE research needs to focus as much on understanding the experience itself as proving psi.16

In a 2016 paper, Alvarado discussed accounts of out-of-body experiences – both historical and recent – that occurred during everyday activities such as talking, driving vehicles and playing musical instruments (in contrast with those that occur during a state of unconsciousness or relaxation).17 Alvarado considered that waking OBEs hold promise in understanding the dissociative state, and encourages further research.

Alvarado described the work of geologist Robert Crookall, whose projection model of the out-of-body experience, based on an analysis of published cases, considers that consciousness leaves the body. Alvarado critiqued weak definitions, the low number of cases, and misclassifications. In his own analysis of new cases, unlike Crookall, he failed to find either a core experience or any clear difference between naturally occurring and induced out-of-body experiences.18

In an exploratory study by Alvarado and Zingrone of the after-effects of out-of-body-experiences, a relationship was predicted between the complexity of the OBE and the degree of positive effects. This was found in a survey of 88 OBE respondents, as were weaker but still significant correlations between religiosity, OBE frequency and OBEs at will, and the degree of positive after-effects.19

In a 1995 report, Alvarado and Zingrone analysed 172 haunting cases collected by Alan Gauld and A.D. Cornell in the 1970s. They predicted that hauntings that included the perception of an apparition would reveal more indications of an intelligent agency than those that did not. This prediction was not confirmed; however, a greater frequency of physical phenomena was found in the apparition group, such as strange object movements and unexplained breakages, and such cases were also more detailed.20

In a 2009 report, Zingrone, Alvarado and Natasha Agee explored the psychological variables associated with aura vision. Aura experiencers reported more visual imagery, fantasy-like experiences and meditation practice than controls. Aura vision is related to visual imagery and fantasy, it was concluded.21 In an earlier survey, an association between synaesthesia and seeing auras was found across five studies.22

Synesthesia was explored in the latter study,23 not in the initial one. The latter study also found relationships with psychic experiences and dissociation, including absorption and depersonalization experiences.

With Christine Simmonds-Moore, Alvarado and Zingrone ran a large online survey exploring the relationship between exceptional and synaesthetic experiences and schizotypy (which is characterized by unusual patterns of thinking that can predispose to schizophrenia). Over half (54.4%) of respondents reported one or more synaesthetic experiences. There was a significant positive relationship between increasing synaesthesia and the number of exceptional experiences.24

In a 2008 publication, Alvarado and Zingrone discussed research carried out by Ian Stevenson  into spontaneous ESP, whose importance Stevenson continued to assert at a time when experimental research was the dominant force in parapsychology. Stevenson developed a high quality investigative approach that combined face-to-face interviews with independent corroboration of testimonies and data preservation. These methodological advances became more apparent when Stevenson began to focus on reincarnation case studies in the 1960s, Alvarado and Zingrone observe.25

Among his many other professional positions and activities, Alvarado taught parapsychology at the Centro Caribeño de Estudios Postgraduados (the Caribbean Center for Advanced Studies, now Albizu University)26 in San Juan, Puerto Rico (1996–2000); served on the dissertation committees at the University of Puerto Rico in Rio Piedras (1995–99); and was a member of the adjunct research faculty at Sofia University (formerly the Institute of Transpersonal Psychology) in Palo Alto, California (2004–20).27

Alvarado was the Chairman of Domestic and International Programs at the Parapsychology Foundation (PF) from 2000 to 2008, volunteering occasionally from 2008 through 2014, and in January 2015 was named the PF's first Research Fellow.  He was Scholar in Residence at Atlantic University, Virginia Beach, Virginia, from 2010 to 2013, and a member of the Advisory Board of the Rhine Research Center Durham, North Carolina, from 2011 to 2014. From 2016 to 2020, he served on the Scientific Board of the BIAL Foundation.28

For a complete list of Alvarado’s professional positions and activities, see his curriculum vitae.

Alvarado was one of the most prolific writers in parapsychology. A selected list of his publications from 1996 onwards can be found here; a comprehensive list is included in his curriculum vitae. A few representative works are included in the Literature list of this article.

Alvarado, C.S. (1982b). Historical perspective in parapsychology: Some practical considerations. Journal of the Society for Psychical Research 51, 265‑71.

Alvarado, C.S. (1993). Gifted subjects’ contributions to parapsychology: The case of Eusapia Palladino. Journal of the Society for Psychical Research 59, 269-92

Alvarado, C.S. (2012). Explorations of the features of out-of-body experiences: An overview and critique of the work of Robert Crookall. Journal of the Society of Psychical Research 76/2, 65-82.

Alvarado, C.S. (2016). Out-of-body experiences during physical activity: A report of four new cases. Journal of the Society for Psychical Research 80, 1-12.

Alvarado, C.S., & Zingrone, N.L. (1995). Characteristics of hauntings with and without apparitions: An analysis of published cases. Journal of the Society for Psychical Research 60, 385-97.

Alvarado, C.S., & Zingrone, N.L. (2003). Exploring the factors related to the after-effects of out-of-body experiences. Journal of the Society for Psychical Research 67, 161-83.