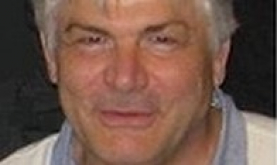 Patrizio Tressoldi is a Italian psychologist and consciousness researcher who has investigated the presentiment response and psychokinetic influences.

Patrizio Tressoldi is a Italian psychologist and consciousness researcher leading the Science of Consciousness Research Group and affiliated with the Studium Patavinum of University of Padova, Italy. He has a long term interest in psi phenomena, and began experimentation in the early 2000s, exploring the presentiment response and making notable progress in developing new methodologies. More recently he has designed novel experiments to investigate psychokinetic influences. He has also reviewed the presentiment and implicit precognition literature.

Tressoldi experimented to discover whether human pupillary responses could accurately predict future stimuli.  Eighty volunteers were exposed to 20 sounds, of which half were neutral and the other half alerting, while their pupil size was being measured. Pupillary responses before target presentations were found to correctly predict alerting stimuli, but not neutral stimuli, at a level 10% above chance, an extremely significant result (p = 4.2 x 10-9), calculated both with established and emerging statistical approaches.1 A somewhat lower, but still significant result was obtained in a conceptual replication using a different type of test: 2.5% above chance level; an exact replication only gave chance results.2

Tressoldi investigated the potential of the brain to anticipate random negative events, using a portable heart-monitor (CardioAlert). The device sends an alert when heart-rate activity indicates the imminence of a negative event, providing an interval for the user to make a different choice.

In an exploratory experiment, 100 individuals were asked to take part in a binary game of chance, choosing one or other of two alternatives, with a random chance of leading to a ‘winning’ outcome. Using the CardioAlert, participants achieved winning outcomes 52.5% of the time, compared with 48.2% when they were not using it – a marginally significant result. The findings were confirmed by a pre-registered confirmatory experiment, in which volunteers achieved winning outcomes 52.7% of the time when they used the CardioAlert. A conceptual replication experiment that allowed the CardioAlert to automatically avoid negative outcomes gave a yet higher winning outcome of 56.3% - an extremely significant finding (p = 10 x 10-6).3

Probing brain activity for presentiment effects, Tressoldi and colleagues used a simplified driving simulation that randomly presented either a car crash or no car crash at the end of each trial. Forty participants wired to EEG monitors were asked, first to passively watch the driving simulation, as the baseline condition, then to try to exert control of the car’s speed by using the computer keyboard spacebar to avoid crashing. Tressoldi found statistically significant differences in participants’ EEG readings in car crash trials compared to those in no-car crash trials a second before the car crash, providing more potential evidence of an ‘anticipation effect’.

Tressoldi speculates on mechanisms involving quantum mechanics, citing the theoretical proposal by Hameroff and Penrose centring on microtubules in the brain. He goes on to suggest that a fuller understanding might eventually offer the potential for ‘smart cars’ to be fitted with machine-integrated EEG software that alerts drivers to the presence of forthcoming dangers.4

In an attempt to understand if presentiment is detecting actual future or probable future events Tressoldi ran four experiments, two measuring heart rate and two measuring pupil dilation. In all four experiments, Tressoldi found that both neutral and alerting stimuli were predicted at a level 7-10% above chance, regardless of whether the stimuli were presented to the subject or not, supporting the hypothesis that it is the probable future that is responded to.5

Tressoldi and colleagues selected participants who exhibited strong motivation and mental control and asked them to try to influence the output of a distant random event generator above pre-stated chance limits of 1 in 20. This was achieved in 78% of 50 experimental sessions compared to 48% of the control sessions – a significant finding. In a pre-registered confirmatory experiment, 82.3% of thirty-four people participating in 102 sessions achieved the pre-stated cut-off limit, compared to 13.7% of the control sessions – an extremely significant finding. The researchers suggest potential practical applications, transforming remote influence on a random event generator over a very short period into a  binary acoustic or visual signal associated with a message, one signal standing for ‘call me’, two signals for ‘be alert’, and so on.6

In a further test of remote influence of random number generators, more equivocal effects were found, mainly in the control data not the influence trials.7

Working with Luciano Pederzoli (EvanLab in Florence, Italy) and John Kruth (Rhine Research Center), Tressoldi investigated the possibility of long-distance biophoton detection. Two studies were completed to discover whether focused intention by five subjects located over 7000 km away could increase the number of photons detected each half second by a photomultiplier in the Rhine Research Centre biophoton lab. In each experiment the intention condition occurred between two control sessions in which no influence was attempted. Analysis showed little effect during the intention condition, but unexpectedly there was a clear-cut difference in counts between the first and second control sessions. Tressoldi  and his US colleagues hypothesized that they were seeing an accumulative effect commencing during the first control session and developing through to the second control session.8 In the second experiment, this cumulative effect of mental intention was not found, however.

An overall analysis across both experiments found an increase of approximately 5% for instances of extreme photon counts, that is, above 100,000, from the first to the second control session – a very unlikely finding (p = 2.1 x 10-4). Tressoldi and co-authors discuss potential mechanisms for such distance effects, including geophysical influences, experimenter psi and entanglement between detector and subject.9

Tressoldi has helped evaluate the evidence base for presentiment. In 2012,10 he co-authored a major meta-analysis of 26 presentiment studies conducted between 1978 and 2010 that utilized a wide range of measures, including heart rate, skin conductance and brain imaging techniques. The overall results were astronomically significant (fixed effect: p < 2.7 x 1012); there was no clear evidence of a possible conventional explanation in terms of poor methodology, selective reporting practices and expectancy effects; the authors took measures to counteract the expected ‘file drawer effect’. Also, the successful results could not be attributed to one or two unusually successful investigators: the results were distributed across all of them. Duggan and Tressoldi repeated the meta-analysis in 2018, reaching the same conclusions.11

Tressoldi and colleagues meta-analysed dream-ESP studies for the period 1966 to 2016. The studies fell into two categories: the Maimonides Dream Lab (MDL) studies of which there were 14 and independent (non-MDL) studies of which there were 36. The Maimonides experiments achieved much larger effects than other studies, possibly because participants were awoken during REM sleep and asked to record their impressions, while in most non-Maimonides they recalled impressions only after waking. A homogeneous dataset of 50 studies gave highly significant effects (p = 5.19×10-8), suggesting that dream content can be used to identify target materials correctly, and more often than would be expected by chance.12

Tressoldi investigated the possibility of brain-to-brain communication over distance without any normal means of connection. He experimented with 20 pairs of subjects, in which one individual received both visual and auditory stimulation while the other’s EEG was being monitored for synchronous signals indicating telepathic transfer of information. Analysis of results revealed an overall increase in the correlation among the EEG channels of the isolated distant partners to a statistically significant degree. Additionally, Tressoldi found a correlation in the strength of EEG signals between sender and receiver volunteers.

Out of Body Experiences

Tressoldi has explored anomalous or non-ordinary states of consciousness, recently taking part in a multi-author investigation of out-of-body experiences (OBE) induced through hypnotic suggestions.13   In this study, 15 highly hypnotizable subjects were  encouraged to have an OBE, either through hypnosis or during normal resting consciousness while a 32-channel EEG monitored their brain activity. At the end of each session, the phenomenology of consciousness inventory (PCI) was administered to check the phenomenological aspects of their experience.  Significantly higher scores were found for the altered states, positive affect, altered experience and attention sub-dimensions of the PCI for hypnotically-induced OBEs over resting OBEs. Additionally, significant decreases were found in beta and gamma EEG activity in certain brain regions for the hypnotically-induced OBEs.

The researchers conclude that the features of the hypnotically-induced OBE are comparable to more transcendental OBEs that occur spontaneously or as a result of trauma, and that experiments using hypnosis can be used to investigate the phenomenon.

Tressoldi and colleagues have contributed to theoretical attempts to frame the accumulated experimental evidence within a model of mind functioning. They discussed a quantum-like model,14 a cognitive psychological model15 and a neuropsychological model.16