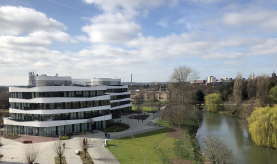 The research group Exceptional Experience and Consciousness Studies (EECS), based at the University of Northampton, is the largest centre for parapsychological research in the world. Its members adopt a critical but sympathetic stance to claims of psychic (psi) experiences, studying their impact on health and wellbeing, and investigating psi ability in laboratory testing.

EECS was originally the Centre for the Study of Anomalous Psychological Processes (CSAPP), consisting of cognitive psychology and neuropsychology research groups of parapsychologists, transpersonal psychologists and consciousness researchers. EECS was formed in 2017 as these groups reformed and merged in the move to the Waterside Campus from Park Campus.

CSAPP started in 1995 with the appointment of Chris Roe, then at the psychology department of St Andrew’s University. Roe gained his PhD at the Koestler Parapsychology Unit under Professor Robert Morris, who had led a conference on parapsychology at Northampton the year before, at what was at that time known as Nene College. Roe set up a teaching module on parapsychology (PSY3007) which has since been given without interruption. In 1997, he obtained a doctoral scholarship in parapsychology at a national competition, which on Morris’s recommendation was allocated to Christine Simmonds-Moore. New studentships were later obtained, mainly with the help of the Bial Foundation and the Society for Psychical Research.

Roe was joined by another KPU PhD laureate, Simon Sherwood, from 1998 to 2012. In 1999, the College became the University College of Northampton. They hired Deborah Delanoy, also from the KPU, as a professor of psychology, with responsibility for research leadership. Latterly, Delanoy was the associate dean for the School of Social Sciences at Northampton until her retirement in 2010. In 2000, the University of Northampton agreed to recognize the CSAPP as a research centre, with Delanoy as its first director.

Located within the psychology division, EECS is now the largest centre for parapsychological research in the world. Following the example of the Koestler Unit, EECS seeks a better understanding of exceptional human experiences by adopting a sympathetic stance to claims of psi, scrutinizing the claims, studying the impact of the experiences on health and wellbeing, and investigating psi ability through laboratory testing.

The centre has been led by Liz Gulliford since 2020, with Chris Roe acting as research leader. A growing number of PhD students are supported by research assistants.

EECS research programmes typically focus on a single exceptional experience through a mixed method, including a survey and a qualitative analysis of interviews. (Auto)ethnography and experimental tasks are sometimes added to provide a complete view of the topic, reflecting on the social context of these experiences and the care of those who may suffer from them.

Topics under investigation include:

Mediums and Mediumship in UK

An on-going collaboration with individuals and groups such as the Arthur Findlay College enables the exploration of aspects of mediumship, both mental and physical, from the perspective of clients, mediums and scientists. Mediumship experiences are accepted in other cultures, but in ours are disavowed; however, some people are able to interpret and manage their experiences while continuing to function normally. This is being studied within the EECS, to generate an understanding that may help others deal with anomalous experiences.

In 2019 Saunders received a Perrott-Warrick grant for a dream ESP study exploring lucid dreams and their potential for precognitive content.

Past research activities include:

Two of the main activities at Northampton, also being pursued extensively elsewhere, have been psi testing with random number generators and remote viewing.

Random number generators (RNG) have been used principally to investigate psychokinesis (PK), the purported ability to affect matter through the action of mind, and precognition, the ability to predict outcomes. PK was first tested with RNGs in the early 1970s by Helmut Schmidt, a German-born physicist and parapsychologist who reported highly significant effects.

Researchers have continued to use these electronic ‘coin-flippers’ in PK experiments ever since, and the accumulated effect size from over 500 experiments, although small in magnitude, is significant to the level of 16.1 sigma.3 Neither quality issues nor selective reporting can explain the results, and they appear broadly distributed.4 A recent, determinedly conservative meta-analysis found a significant effect size (0.500035) across 380 studies, although this finding remains ambiguous, as the outcome is reversed when three large experiments with negative effects sizes are included (z -3.67, p < 0.001).5

Besides demonstrating the existence of psi, parapsychologists are also concerned with the processes involved, and this is a strong focus of activity at EECS. Since 2009, Chris Roe and colleagues have been trying to unravel the conditions most suitable to eliciting precognition. They use a method in which the task is implicit: subjects are not told they are being tested for precognition, and instead are asked to indicate a preference for a particular picture in a set of four, of which one is the precognitive ‘target’. This approach has been found to yield a greater effect size (0.03)6 than studies in the earlier precognition meta-analysis, in which subjects understood the true nature of the task (0.01). In some of these studies, personality variables such as openness to experience were found to correlate with precognition performance.

Remote Viewing (RV) is a methodological procedure for ESP, where the percipient is required to view distant objects, geographical locations and events across a distant spacetime point. Chris Roe and Stuart Flint performed a remote viewing experiment using a ganzfeld induction procedure on 14 novice sender-receiver pairs, and obtained significant scoring on a weighted sum of ranks (p = 0.008).7 To discover the contribution of the ganzfeld procedure in this success, Cal Cooper,8 then a PhD student, devised a controlled experiment in which remote viewing was carried out with and without a ganzfeld induction and found a hit rate of 35% under the ganzfeld condition.

In June 2020, EECS published the results obtained in three ganzfeld-remote viewing comparison studies, in which 110 participants produced 43 hits in the ganzfeld stimulation condition (39%), giving a highly significant positive deviation from chance expectation (sum of ranks = 225, p = 0.000012). In the waking (non-ganzfeld) remote viewing condition they achieved 30 hits (27.5%), which is only marginally above chance expectation (sum of ranks = 253, p = 0.034).9

Rachel Evenden, now lecturing in psychology at the University of Northampton: clinical parapsychology

Aaron Lomas: phenomenology of apparitional and anomalous experiences reported during the Covid-19 pandemic

Christine Simmonds-Moore, now professor of psychology at the University of West Georgia: schizotypy as an anomaly-prone personality (2003)

Nicola Holt, Creativity, altered states of consciousness and anomalous cognition: The role of epistemological flexibility in the creative process (2007), now Associate professor of psychology, University of the West of England

Kimberley Sheffield: loving kindness meditation and its relationship with wellbeing (2017)

Louise Spiers, now senior lecturer in psychology at the University of Northampton: spiritual experiences in individuals with epilepsy

Roe, C. A., Hodrien, A. and Kirkwood, L. (2012). Comparing remote viewing and ganzfeld conditions in a precognition task. In: Abstracts of presented papers: